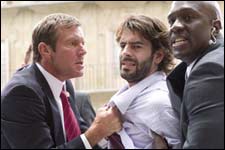 Samrat Sharma / fullhyd.com
EDITOR RATING
5.0
Performances
Script
Music/Soundtrack
Visuals
NA
NA
NA
NA
Suggestions
Can watch again
NA
Good for kids
NA
Good for dates
NA
Wait for OTT
NA
If I was Pete Travis, I would just repeat the first paragraph of this review eight times, and call it a day. Of course, you'd hate me for it, as I very much dislike Mr. Travis for making a film that is riddled with redundancy, and worse, still reaches nowhere.

As thrillers go, Vantage Point is packed with all the ingredients that you'd think are needed for a thriller these days. American President in danger, assassination attempts, hard-as-nails secret service agents, bombings, car chases, innocent American bystanders, and for good measure, goddamn terrorists. But only if your standards for a thriller have fallen as low as to expect only the bare minimum of explosions and gunfights to have fun.

For my part, I like my thrillers to have edge-of-the-seat excitement, coherence, serious characters, and at least the semblance of a plot that yells conspiracy. Vantage Point, though, demands to be paid attention to. Like a cheap Babylonian whore, the film sells its wares with no decency - "Look, I've got car chases, things blow up, the American President might be in danger! I might have some jihad commentary. Look, I've got a grizzled Dennis Quaid, and he was totally in that secret service movie with Michael Douglas!"

It begins when we see the President (William Hurt) arrive in a town in Spain to participate in a global anti-terrorist conference. At a very public place, as he is flanked by his agents Thomas Barnes (Dennis Quaid), a guy who has already taken a bullet for him earlier, and Kent Taylor (Matthew Fox from TV's Lost), he is shot. Or it appears so. In the chaos, a civilian, Howard Lewis (Forest Whitaker), keeps taping the scenario, while the news production executive, Rex Brooks (Sigourney Weaver), has access to multiple cameras at that point.

Local cop Enrique (Eduardo Noriega), trying to hide in the confusion, as well as the President himself form a part of the 8 different viewpoints that are present of the event. The film rewinds, and we see all the events from another perspective. Certain plot elements are disclosed, when it abruptly stops, rewinds, and we see it all over again, from a different perspective. This goes on, again and again.

Groan-inducing as this exercise may be, the film's B-movie pretensions to be something of value fall flat when it abandons this fruity premise it was selling, and gives way to a lengthy, nay, endless car chase and needless exposition that explains as much as it obscures. That, and Forest Whitaker running after secret service guys for no bloody reason, are the entire 3rd act of the film.

The first sign that this film wasn't even remotely cutting it would have been the release that came in February the world over, while we have been subjected to intriguing trailers since July last year. Second was just the dialog that has as many ludicrous lines as it has tired old clichés and flat lines spouted with gritted teeth to seem edgy. The biggest sign that told me that this was just a big studio cash-in on the usual early year drought of films was the fact that it hinged its entire intrigue on one premise, that of the title, and hung on to it for dear life, never once stopping to examine the screenplay, characterization or even pacing.

The middle part of the film, where we piece together what happened, what with all the intricacies of political bombings and the ramifications of attempted assassinations of the most powerful human on the planet, is quite interesting, to tell you the truth. But the tiring first half and the limp and insipid third act do nothing to make a first rate exercise in thriller writing any less oblivious.

The performances are reasonably extracted, with no one being exceptionally noteworthy in the good or bad department, just as it should be with thrillers. Technically, the shot selection is marvelous, and some of the tricks employed for our benefit end up being thoroughly well done. Travis does have a flair for the sudden jolts and the big bangs, to be sure, but everything is sandwiched between the two bad bookends of the film.

This film knows exactly what it is doing - filling a gap until a decent release actually makes the marquees. It is a bored person's Bourne, and if you aren't especially feeling the lack of slam-bang actioners, might I suggest you wait a few more days till the good releases start coming back?
Share. Save. Connect.
Tweet
VANTAGE POINT SNAPSHOT

ADVERTISEMENT
This page was tagged for
Vantage Point english movie
Vantage Point reviews
release date
Dennis Quaid, Matthew Fox
theatres list
Follow @fullhyderabad
Follow fullhyd.com on
About Hyderabad
The Hyderabad Community
Improve fullhyd.com
More
Our Other Local Guides
Our other sites
© Copyright 1999-2009 LRR Technologies (Hyderabad), Pvt Ltd. All rights reserved. fullhyd, fullhyderabad, Welcome To The Neighbourhood are trademarks of LRR Technologies (Hyderabad) Pvt Ltd. The textual, graphic, audio and audiovisual material in this site is protected by copyright law. You may not copy, distribute, or use this material except as necessary for your personal, non-commercial use. Any trademarks are the properties of their respective owners. More on Hyderabad, India. Jobs in Hyderabad.