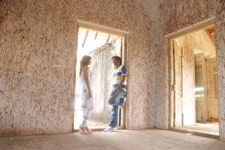 Kritika Deval / fullhyd.com
EDITOR RATING
2.5
Performances
Script
Music/Soundtrack
Visuals
2.0
3.0
4.0
5.0
Suggestions
Can watch again
No
Good for kids
No
Good for dates
No
Wait to rent it
No
When high expectations come crashing down, it hurts. What most people don't realize is the effect had when really low expectations aren't met. See, when this writer heard of the title and cast, she fully expected to have to cringe and groan all the way to the final credits. And, in a state that keyed up, all she was met with was relentless mediocrity. (Note to newbie directors: Not done, y'all!)

With a title like D/O Ram Gopal Varma, think of the heights of horribleness (omg! That really is a word) a movie could reach. It could have been annnnnything. What it ended up being is the utterly colorless tale of RJ Varma (Vennela Kishore), ladies man utterly-ordinaire, as he fights off the deadly claws of the Commitment monster.

Varma is the proverbial pot of honey with which to catch flies. His voice makes college girls give up on college so they can sit in the canteen n listen to it all day (also, apparently, Radio Mirchi makes him work all day). Women confide in him. Men apologise to him. And, most importantly, TV9's reporters think he is important enough to do an expose on.

What could possibly go wrong in his woman-dodging, baby-bashing life? A woman he can't dodge, and a baby he can't bash, that's what.

The rest of the story is about as unimportant as the movie itself. What is important is that the makers cheat you twice over. 1. They cheat you by making you think it'll be an awful movie. 2. Then, during the first 10 mins, they cheat you by giving you hope that it just might be a good movie, thereby garnering false sympathy for the movie because the only theatre in the city running it is full of bedbugs.

Shit hits the fan pretty quickly, and then you find your eyes tearing up, because you're so bored and you miss your (exterminated) bed. What starts off as decent and interesting cinematography soon starts making your brain hurt, they way Telugu soap operas do. The music seems kinda catchy, right up until you actually hear the words.

Vennela Kishore does a decent job, as would absolutely anybody if all they had to do on screen was grimace. The two girls in the flick, Kavitha Aras and Naveen Jackson, were probably brought in from the cardboard cut-out factory.

Roja seems to be having fun as TV9 reporter Ganga, on the prowl for scandalous celebs along with her cameraman (you guessed it), Rambabu. There's a kid in the movie who gets a catchphrase ("Namasthe Thathagaru!"). The function of this catchphrase seems to be to turn Kishore's grimaces on and off, so, well, that's a fun part.

Verdict: All is over, readers. Our directors can't even suck badly enough for their audiences.
Share. Save. Connect.
Tweet
D/O RAM GOPAL VARMA SNAPSHOT 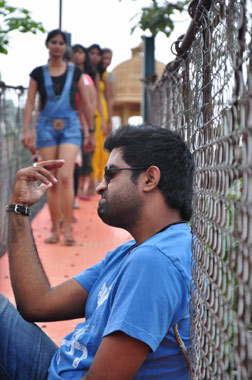 ADVERTISEMENT
This page was tagged for
D/O Ram Gopal Varma telugu movie
D/O Ram Gopal Varma reviews
release date
Vennela Kishore, Kavitha Aras
theatres list
Follow @fullhyderabad
Follow fullhyd.com on
About Hyderabad
The Hyderabad Community
Improve fullhyd.com
More
Our Other Local Guides
Our other sites
© Copyright 1999-2009 LRR Technologies (Hyderabad), Pvt Ltd. All rights reserved. fullhyd, fullhyderabad, Welcome To The Neighbourhood are trademarks of LRR Technologies (Hyderabad) Pvt Ltd. The textual, graphic, audio and audiovisual material in this site is protected by copyright law. You may not copy, distribute, or use this material except as necessary for your personal, non-commercial use. Any trademarks are the properties of their respective owners. More on Hyderabad, India. Jobs in Hyderabad.