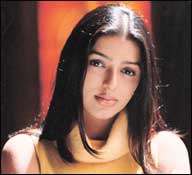 Deepa Menon / fullhyd.com
EDITOR RATING
7.0
Performances
Script
Music/Soundtrack
Visuals
NA
NA
NA
NA
Suggestions
Can watch again
NA
Good for kids
NA
Good for dates
NA
Wait to rent it
NA
Naa Autograph is not likely to stay in the theaters for very long. It doesn’t drag its audience into the aisles to dance manically, it won’t provide roadside-romeos with a new repertoire, and wannabes won’t want to copy the hero’s hairstyle (thank God). There are no mass item numbers, no picking of cherries from a drenched heroine’s navel, and no invoking of the ma-behen at any point. So no one will go home and talk about this flick. Which is sad, because Naa Autograph is a thoroughly decent effort.

Told almost entirely in flashback mode, Ravi Teja’s latest starts off like someone riding a bicycle after a long gap. The first-person narrative is wobbly and awkward as it begins telling you the story of a Seenu. Village lad, in love with village lass, cycling along mud roads and playing the lovable truant. Blah blah rustic charm blah blah. But gradually the story finds its own voice and strides along more confidently.

Seenu is in love. This is, more or less, a natural state of affairs with him. The film, then, is a tale of old loves revisited, as a grown-up Seenu goes back to familiar haunts to invite girlfriends past to his wedding. A little muddled up, but you’ll have about one-and-half-hours to work it all out because an entire one half of the film is about the first two women in his life.

Vimala is Seenu’s childhood sweetheart and when she’s not being overcome with shyness or giggling coyly, she makes quite a pleasant companion. They spend high school sneaking covert glances at each other, till she breaks his heart one day by going off and getting married. Lathika, woman number deux, also does the same thing but not before they’ve kissed and sung a song under a waterfall. So this time it’s doubly tragic and Seenu is left with no other alternative but to drink himself silly.

Broken-hearted but relatively sober, Seenu comes to Hyderabad in search of a job. And this is where he meets Divya (Bhumika Chawla), who is the kind of person that will remind you of the starving children in Somalia just as you are about to bite into a triple cheeseburger. But Divya is sweet and Seenu causes her to come over all maternal, so they become close friends. She has her own demons from the past by way of a failed attempt at suicide and the jerk that caused it.

But at this point the film does a little back-flip and goes wandering about in the past again. This is tiresome and, as a result, the story’s pace, which is already making the front-benchers twitchy, slows down even further. A fat glob of sadness happens when Seenu finds out that Lathika (old girlfriend 2) is now a widow. No doubt a tragic incident, but why the hero has to go off into a paroxysm of intense grief at this point, is not entirely clear.

That vexing detail and a general slack in the narrative are the movie’s major goof-ups. If you are, however, willing to forgive some digression here and there, Naa Autograph makes a nice change from the inane sap that’s being churned out all around you. A remake of the Tamil Autograph, this flick is wickedly funny in parts. Ravi Teja fits the bill with no major overspills, except for some hamming towards the end. And we’re not sure that’s completely his fault either. Watch Naa Autograph for some light-headed fun. It might not bring in the swarms, but it’s got heart.
Share. Save. Connect.
Tweet
NAA AUTOGRAPH... SWEET MEMORIES SNAPSHOT

ADVERTISEMENT
This page was tagged for
na autograph heroin image in ncc
na autograph heroin
Naa Autograph... Sweet Memories telugu movie
Naa Autograph... Sweet Memories reviews
release date
Follow @fullhyderabad
Follow fullhyd.com on
About Hyderabad
The Hyderabad Community
Improve fullhyd.com
More
Our Other Local Guides
Our other sites
© Copyright 1999-2009 LRR Technologies (Hyderabad), Pvt Ltd. All rights reserved. fullhyd, fullhyderabad, Welcome To The Neighbourhood are trademarks of LRR Technologies (Hyderabad) Pvt Ltd. The textual, graphic, audio and audiovisual material in this site is protected by copyright law. You may not copy, distribute, or use this material except as necessary for your personal, non-commercial use. Any trademarks are the properties of their respective owners. More on Hyderabad, India. Jobs in Hyderabad.