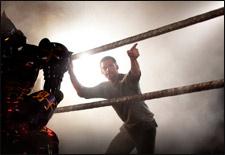 Nupur Barua / fullhyd.com
EDITOR RATING
6.0
Performances
Script
Music/Soundtrack
Visuals
6.0
4.0
4.0
7.0
Suggestions
Can watch again
No
Good for kids
Yes
Good for dates
Yes
Wait for OTT
No
55 years after Richard Matheson wrote his short story, Steel, Dreamworks and 21 Laps releases their version of the same, as a movie titled Real Steel. To give the story a larger canvas, the makers roped in Hugh Jackman and made him drive heavy trucks. Shawn Levy, best known for his comedies (The Pink Panther, Date Night, Night At The Museum) may be an odd choice of director, but he does what he has to, pretty decently, given that the movie becomes predictable within the first 10 minutes.

The year is 2020. Human beings no longer box in tournaments, but the sport has not died. Instead, since carnage is always welcome, gigantic robots, controlled by humans, slug it out in the ring. Charlie Kenton (Hugh Jackman), an ex-boxer, is the proud owner of one such Bot named Ambush, a pretty worn-out piece of steel. Impulsive and hasty, Charlie leads Ambush into defeat against a 2,000-pound bull.

Charlie has a son, Max (Dakota Goyo), whom he has never seen. Max lives with his aunt Debra, from whom Charlie takes the kid for the summer. Not surprisingly, Max is a Bot fan, and very smart.

There is no reason to look for logic in Real Steel, seeing that it anyway belongs to the fantasy genre. For instance, no father in his right mind would expose his son to the sleazy world of drunk and violent has-beens and punks, but in 2020, it is not an issue. With movie-goers getting wiser, the makers of Real Steel could have offered a better script, but, again, Hollywood thrives on stories that have obvious endings.

Hugh Jackman, without his Wolverine side-burns, is easy on the eye. He is as fit as Ajay Devgn in Singham (both actors are the same age), and demonstrates some graceful boxing moves. However, he seems rather disinterested in his role, and sleepwalks through it.

Evangeline Lilly as Charlie's best friend and mechanic does her best, but she is just a distraction. The chemistry between the two leads is nothing to write home about, and her contribution to the story is non-existent. Her co-star from LOST, Kevin Durrand, looks mean and could have been a great villain if the script was written well.

The real star of the movie is Dakota Goyo. Confident and self-assured, he plays the 11-year-old boy coming to terms with his life, perfectly. He steals Hugh Jackman's thunder (which may explain the latter's lack of enthusiasm), and is likely to become another Macaulay Culkin.

This is no Rocky, but the seamless sewing together of live action with special effects is worth a watch. The best visuals are those in which the robots pound each other, even if you are not a fan of brutality.

Strictly for Hugh Jackman and Steven Spielberg fans, Real Steel has its moments, and can be enjoyable if you are not too finicky.
Share. Save. Connect.
Tweet
REAL STEEL SNAPSHOT

ADVERTISEMENT
This page was tagged for
Real Steel english movie
Real Steel reviews
release date
Hugh Jackman, Dakota Goyo
theatres list
Follow @fullhyderabad
Follow fullhyd.com on
About Hyderabad
The Hyderabad Community
Improve fullhyd.com
More
Our Other Local Guides
Our other sites
© Copyright 1999-2009 LRR Technologies (Hyderabad), Pvt Ltd. All rights reserved. fullhyd, fullhyderabad, Welcome To The Neighbourhood are trademarks of LRR Technologies (Hyderabad) Pvt Ltd. The textual, graphic, audio and audiovisual material in this site is protected by copyright law. You may not copy, distribute, or use this material except as necessary for your personal, non-commercial use. Any trademarks are the properties of their respective owners. More on Hyderabad, India. Jobs in Hyderabad.