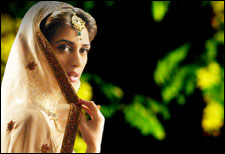 Nupur Barua / fullhyd.com
EDITOR RATING
6.0
Performances
Script
Music/Soundtrack
Visuals
7.0
8.0
5.0
6.0
Suggestions
Can watch again
Yes
Good for kids
No
Good for dates
No
Wait to rent it
No
When Shoaib Mansoor entered the world of movies as a director, he did so with a bang - with Khuda Kay Liye, in 2007. The critical appreciation that the movie received paved the way for the writer-director to indulge in a big budget film. His latest offering, Bol, has a few big stars, and, from the positive response that it has garnered, it is obvious that Shoaib Mansoor is here to stay.

Unlike his first movie, in which the perspective kept changing with every character, Bol is the story of one woman and her relationship with her family, especially her father. Zainub (Humaima Malick) is sentenced to death, and she has never told her side of the story to the court or the media. Acting on the advice of her brother-in-law and neighbour, Mustafa (Atif Aslam), she now decides to bare all to a gathering of the media, at the gallows. This rather dramatic request is approved of by the President of Pakistan, and Zainub faces the cameras.

She begins her story with her immigrant grandfather, who settled in Lahore after Partition because it reminded him of his home-town, Delhi. Her father, Hakim Sahib (Manzar Sehbai), gets his wife Suraiya (Zaib Rehman) pregnant every year, hoping for a son. After 7 daughters, the couple have a son, who is a hermaphrodite. Refusing to let her husband kill the child, Suraiya and her daughters bring up the boy, whom they name Saif Ullah (Amr Kashmiri), in a protected environment.

Hakim Sahib is an orthodox authoritarian figure, one who disapproves of television and mindless entertainment, and who does not let his daughters study after the 5th grade. The women of his house are not allowed to step out, and they spend their miserable lives in poverty and despair. The only ray of sunshine in their life is Saifu, now in his adolescent years, but Hakim Sahib does not acknowledge his existence at all.

The grouchy Hakim does not even socialise with his neighbours, the Choudharys, just because they belong to a different religious sect. These neighbours are the only friends from the outside world that the women in the house have, and one of the daughters, Ayesha (Mahira Khan), is in love with Choudhary's son, Mustafa.

When the Hakim is forced out of his comfort zone and made to compromise on his ideals, it seems like he will become a better man. He does, to an extent, but he still treats his own family like dirt. And then Zainub rebels, and the lives of Hakim's women take an unexpected turn.

Bol ends with a question that sums up the movie - "If it is a crime/sin to kill, then why is it not a crime/sin to give birth?" It also brings to the surface an ugly truth - if a father kills his daughter, nobody pays much heed, but killing a son is considered a crime.

Shoaib Mansoor is a master story-teller. Every character is well-etched, and consistent. However, he has not mastered the art of crisp film-making. Almost 3 hours long, Bol seems never-ending. The story begins with the rejection of the hermaphrodite baby, and then deals with politics, media, status of women, the role of religion, child molestation, and the privileges of a man in Pakistan.

There is more to Humaima Malick than being Wasim Akram's arm-candy, and she proves it with Bol. She is perfect as the helpless, desperate, rebellious, divorced daughter of a tyrant, although her initial scenes involve some hamming.

The scene-stealer, however, is Manzar Sehbai, with his Charles Manson-meets-Rasputin get-up. He plays a bully and a coward, but also manages to insert some vulnerability in the character, especially when he meets the foul-mouthed Meena Kumari wannabe Safeena (Iman Ali).

Atif Aslam plays a character which is the voice of reason in the film. He also performs one of his songs on a stage, with Mahira Khan.

Despite being technically imperfect and rather too long, Bol is reminiscent of the style of great authors such as A J Cronin (with specific reference to Hatter's Castle), and succeeds in making its point.
Share. Save. Connect.
Tweet
BOL SNAPSHOT

ADVERTISEMENT
This page was tagged for
bol movie message in hindi
bol movie review in hindi
Bol hindi movie
Bol reviews
release date
Follow @fullhyderabad
Follow fullhyd.com on
About Hyderabad
The Hyderabad Community
Improve fullhyd.com
More
Our Other Local Guides
Our other sites
© Copyright 1999-2009 LRR Technologies (Hyderabad), Pvt Ltd. All rights reserved. fullhyd, fullhyderabad, Welcome To The Neighbourhood are trademarks of LRR Technologies (Hyderabad) Pvt Ltd. The textual, graphic, audio and audiovisual material in this site is protected by copyright law. You may not copy, distribute, or use this material except as necessary for your personal, non-commercial use. Any trademarks are the properties of their respective owners. More on Hyderabad, India. Jobs in Hyderabad.