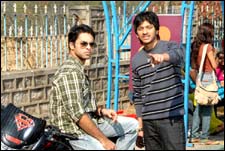 Deepa Garimella / fullhyd.com
EDITOR RATING
3.0
Performances
Script
Music/Soundtrack
Visuals
6.5
3.0
6.0
6.0
Suggestions
Can watch again
No
Good for kids
No
Good for dates
Yes
Wait to rent it
Yes
Meant to set afloat musician Koti's son Rajeev Saluri into the film world, Aakasame Haddu is your typical non-superstar-son-launch. One that lacks the flashy glitz and testosterone of a traditional debut, but that smacks of promising talent. The fact that this is being promoted as a Navdeep film further sidelines the young debutant, who, nevertheless, manages to emerge from the proceedings just fine.

Aakasame Haddu is also one of those "youth-oriented" kind of films that have a "message" written all over them, suspiciously in compensation for their bankruptcy in any real value. The movie is a low-budget offering, and has a characteristic stamp of mediocrity all over.

No one who's reading this review probably cares, but Aakasame Haddu's story starts off a lot like the recent Naaku O Lover Undi, with an underdog as the protagonist in a suicidal mood, narrating his disastrous love story to a stranger. Even the twist is similar. Here, it is Narayana (Rajeev Saluri), who bumps into Karthik (Navdeep) at a pub and pours his heart out to him.

Narayana was a brilliant and hardworking student, and primarily a soft-spoken geek, but his infatuation and obsession with a girl (Panchi Bora) he sees at a bus stop has led to his academic and emotional ruin. Karthik befriends him and offers to bail him out, and this forms the rest of the story.

After the first "shocking" twist, the plot becomes completely weird. The climax and the denouement can be called cruel, if only the movie itself weren't so amusingly second-rate.There's nothing in the film to really rave about. The dialogues are bland, and in many places, silly. However, the comedy and romance are mildly entertaining. Plus, Navdeep's scenes are engaging.

Not having to play a brawny macho hero works out well for Rajeev, since he looks too young for those roles right now. In this film, he looks the part, and is quite convincing as the shy plain-looking university topper, while still managing to emanate an easy, boy-next-door charm.

This is too small a film for Navdeep, who infuses his usual mix of spontaneity and expressiveness to the otherwise insipid production. He plays a rather avuncular role for the most part, but has a few romantic scenes as well, which are impressively devoid of artificiality.

Panchi Bora, who is familiar to audiences as a TV soap actress, has to mostly look morose. The campus sidekicks are a bunch of amateur actors, save for Suman Shetty. Dharmavarapu could have been given some more comedy, and his scenes are funny mainly because it's him in them.

Each of the songs starts off ambitious and grandiose, with a heavy Yuvan Shankar Raja influence, but the music director's rawness shows eventually. As for the production values, they are about enough to keep the film from looking bad.

In all, a film you can ignore, unless you're stuck with a really option-less afternoon on television.
Share. Save. Connect.
Tweet
AAKASAME HADDU SNAPSHOT

ADVERTISEMENT
This page was tagged for
aakasame haddu movie story
Aakasame Haddu telugu movie
Aakasame Haddu reviews
release date
Rajeev Saluri, Navdeep
Follow @fullhyderabad
Follow fullhyd.com on
About Hyderabad
The Hyderabad Community
Improve fullhyd.com
More
Our Other Local Guides
Our other sites
© Copyright 1999-2009 LRR Technologies (Hyderabad), Pvt Ltd. All rights reserved. fullhyd, fullhyderabad, Welcome To The Neighbourhood are trademarks of LRR Technologies (Hyderabad) Pvt Ltd. The textual, graphic, audio and audiovisual material in this site is protected by copyright law. You may not copy, distribute, or use this material except as necessary for your personal, non-commercial use. Any trademarks are the properties of their respective owners. More on Hyderabad, India. Jobs in Hyderabad.