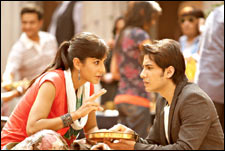 Nupur Barua / fullhyd.com
EDITOR RATING
4.0
Performances
Script
Music/Soundtrack
Visuals
4.0
6.0
5.0
7.0
Suggestions
Can watch again
No
Good for kids
No
Good for dates
Yes
Wait for OTT
Yes
Yashraj Films thrive on weddings and love stories (think Band Bajaa Baraat in recent times). So it is no surprise that an assistant director from the camp makes his debut in a similar genre. Written and directed by Ali Abbas Zafar (no relation to the actor), Mere Brother Ki Dulhan is not a rip-off of Dan In Real Life, as is commonly believed. In fact, the screenplay is as original as they come these days, but unfortunately, falls short of expectations.

Luv (Ali Zafar) lives in London. He dumps his girlfriend Piyali (Tara D'Souza) after a bad fight, and proceeds to call his younger brother Kush (Imran Khan), an assistant director in Mumbai, who happens to be revelling at the success party of a film starring John Abraham. Luv tells Kush that he wants to settle down with an Indian girl, and adds that he will definitely like the girl Kush likes (now that should get your antennae up).

Kush goes home to Dehra Dun (where the director is from, and therefore the great visuals), to his parents, and begins his search. A full-page matrimonial ad for Luv results in (a) Rakhi Sawant asking for Luv to be a part of her second season of Rakhi Ka Swayamvar, and (b) a phone call from a diplomat (Kanwaljeet Singh), whose daughter is of marriageable age.

When Kush and his mother go to Delhi to meet the family, he realises that the girl is none other than this wild chick D (Katrina Kaif) whom he had met when he was in college 5 years ago. She was obviously interested in him then. Now she goes by her real name, Dimple, and is willing to marry any boy her parents choose (out of a sense of guilt, coupled with 'maturity', for her wild days).

Luv is more than willing to marry this pretty young thing, who smokes and drinks - "chutki mein Bipasha, chutki mein Madhubala" - and is all set to go through the trials and tribulations that lead up to an engagement, and extends into a wedding. And then Kush realises that he is in love with his brother's fiancÃ©e.

The story is mostly predictable. It is evident that the hero will get the girl, but what is interesting is his master plan to achieve this. Keeping in mind Indian sensibilities, he cannot do anything to hurt the family name and honour. The movie moves from Mumbai to Dehra Dun to Delhi to Agra, and everybody seems to be having a great time. There are no over-emotional scenes, or heartbreaks.

What Ali Abbas Zafar does not get right is his portrayal of the 'middle-class' Indian family. Much like Farhan Akhtar's skewed perspective of what middle-class means (refer to Zindagi Na Milegi Dobara), the characters in Mere Brother Ki Dulhan have plenty of money to spend, and everybody loves everybody else. Also, Kush lectures D about lihaaz and tehzeeb, but tells her that she is perfect the way she is.

This is more Katrina's movie than Imran's, and she mucks it up. You cannot expect her to carry a movie on her shoulders (she looks pretty, but that is about it) - she screeches her dialogues, in an effort to be funny, and falls flat on her face. Not that Imran is Marlon Brando. He cocks his eyebrows all the time, and has a constant smile on his face, even when he is dead serious (in love and in guilt).

Ali Zafar is obviously talented, and he was apparently very excited about playing a parallel lead in an YRF production. However, he is made to look like a buffoon most of the time, and does not have the best lines. Tara D'Souza makes an impressive debut.

Amongst the supporting cast, Kanwaljeet is perfect. Parikshat Sahni speaks English with a strange accent to emphasise his Army background, but he looks the part. And the actor who plays Kush's childhood friend is a talent to watch out for (he resembles Piyush Mishra, and even speaks like him).

Production design is pleasing to the eye, especially the guest house in Delhi and others, and some of the visuals are great. Costume design, however, is not so good, especially for Imran. Katrina looks good in Indian attire in this one.

Watch only if you are a die-hard Katrina fan, but do not expect to be bowled over by her rocker-chick look.
Share. Save. Connect.
Tweet
MERE BROTHER KI DULHAN SNAPSHOT

ADVERTISEMENT
This page was tagged for
hindi movie mere brother ki dulhan movie hd
Mere Brother Ki Dulhan hindi movie
Mere Brother Ki Dulhan reviews
release date
Imran Khan, Katrina Kaif
Follow @fullhyderabad
Follow fullhyd.com on
About Hyderabad
The Hyderabad Community
Improve fullhyd.com
More
Our Other Local Guides
Our other sites
© Copyright 1999-2009 LRR Technologies (Hyderabad), Pvt Ltd. All rights reserved. fullhyd, fullhyderabad, Welcome To The Neighbourhood are trademarks of LRR Technologies (Hyderabad) Pvt Ltd. The textual, graphic, audio and audiovisual material in this site is protected by copyright law. You may not copy, distribute, or use this material except as necessary for your personal, non-commercial use. Any trademarks are the properties of their respective owners. More on Hyderabad, India. Jobs in Hyderabad.