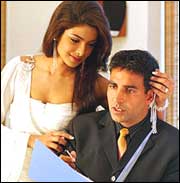 Deepa Menon / fullhyd.com
EDITOR RATING
6.0
Performances
Script
Music/Soundtrack
Visuals
NA
NA
NA
NA
Suggestions
Can watch again
NA
Good for kids
NA
Good for dates
NA
Wait to rent it
NA
Bollywood has shown surprising restraint. They waited ten years after the release of Disclosure to rip-off the story idea. But it was unnecessary. Nobody (by which we mean N-O-B-O-D-Y) will get Aitraaz mixed up with the Demi Moore-starrer. It would be like mistaking Bappi Lahiri for Elvis. Or P Diddy for the Pope. Or Jessica Simpson for someone who can sing.

But while Bappi Lahiri might not get you all shook up, he has occasionally come up with catchy music. It might have been years before he released his seminal work, Night Lovers, but it had happened for Mr. Lahiri at some point. He's done his thing, had his moments. Exactly like Aitraaz. It's a crazy mixed up movie, but it can be fun. Within its parameters of pure stupidity, it manages to entertain.

Raj (Akshay Kumar) is a stud-muffin who can pretty much have any girl he stares at fixedly. Yet, he is a bachelor. Until one day he meets Priya (Kareena Kapoor), under circumstances so dumb, they fall in love. As a wedding gift, Raj buys them an enormous mansion after acquiring a loan from HDFC. Please pay attention, these are all very important details.

Raj is confident in his ability to pay back the loan (taken from HDFC) because he's expecting a promotion at work. But on the day that said promotion is to be announced, a bombshell is dropped in the form of Sonia (Priyanka Chopra).

It turns out that Raj and Sonia have major history together and she was once going to become his bachche ki maa. But she refuses to have the baby, because Milan has no use for pregnant models. And Sonia is not only a model, but also a superb career-planner. The sort that will marry and/or seduce every obstacle that comes in her way.

So Raj and Sonia part bitterly till he is introduced to her years later as his boss' wife. Now, the boss is much, much older than his wife and why they had to get Amrish Puri to play this role is a mystery. But you have to hand it to the director for not sidelining any character. Except that of the heroine's.

Kareena Kapoor plays wifey with limpid, devoted eyes, while you keep expecting her to do something evil and exciting. She, however, prefers to take Tammy Wynette's advice and stand by her man. And he needs all the help he can get too, because the boss's wife is hitting on him. In an unconvincing seduction scene, Sonia pounces on him and kisses his lapels thoroughly.

After a not-very-brief scuffle, Raj throws her off and storms out. The next day he finds he's fired for attempting to rape his boss' wife. The only one who believes his innocence is Priya, his wife. They battle it out in corny, yet humorous courtrooms scenes that belong entirely to Paresh Rawal and his brand of lunacy.

Throughout the film are scattered speeches about Sexual Harassment and us type ki aurat. For a masala flick, Aitraaz is strangely coherent in parts. Like we said, it's nothing to take seriously but it does have general faff value. So that's something.

ADVERTISEMENT
This page was tagged for
aitraaz in hindi movie
hindi filam aitraaj
aitraaz hindi movie
Aitraaz hindi movie
Aitraaz reviews
Follow @fullhyderabad
Follow fullhyd.com on
About Hyderabad
The Hyderabad Community
Improve fullhyd.com
More
Our Other Local Guides
Our other sites
© Copyright 1999-2009 LRR Technologies (Hyderabad), Pvt Ltd. All rights reserved. fullhyd, fullhyderabad, Welcome To The Neighbourhood are trademarks of LRR Technologies (Hyderabad) Pvt Ltd. The textual, graphic, audio and audiovisual material in this site is protected by copyright law. You may not copy, distribute, or use this material except as necessary for your personal, non-commercial use. Any trademarks are the properties of their respective owners. More on Hyderabad, India. Jobs in Hyderabad.