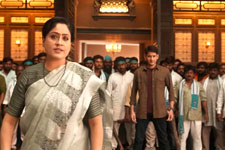 Chaitanya Karthik / fullhyd.com
EDITOR RATING
7.5
Performances
Script
Music/Soundtrack
Visuals
8.0
6.0
7.5
8.5
Suggestions
Can watch again
Yes
Good for kids
Yes
Good for dates
Yes
Wait to rent it
No
Given the kind of characters that Mahesh Babu has been enacting recently, it is easy to forget how broad his acting arsenal is. He can be serious, he can be angry, he can be calm, he can be sad, he can be troubled, he can be funny. Like Batman is to Gotham, he is whatever his director needs him to be. But of late, he has done a string of roles that have earned him the criticism of appearing monotonous. With Sarileru Neekevvaru, he makes an honest attempt at reinventing himself.

Ajay (Mahesh Babu) is a Major in the Indian Army, and that naturally calls for a bunch of terrorists to be killed in an operation led by him. Another Ajay (Satya Dev), whose sister is going to get married in ten days, gets fatally injured in the operation, and the Ajay we are watching the movie for is sent to Kurnool along with Prasad (Rajendra Prasad) to inform the other Ajay's mother, Bharati (Vijayashanti), about what happened, and to take care of his sister's wedding.

He goes to Bharati's house to find that the house is locked and things are scattered all over the place. He instantly realizes that something is amiss and goes in search of Bharati. He finds her eventually trying to escape the goons of Nagendra (Prakash Raj).

Ajay learns that Nagendra is a local minister, who has murdered a few people, one of them being a relative of Bharati. Bharati had filed a complaint, but instead of the issue being solved, it lead to her fleeing for her life. The rest of the story deals with what Ajay does while he is Kurnool before he returns to his regiment in Kashmir.

The story and the script don't score high in terms of novelty - Telugu movies are replete with stories of one man going to a certain place and changing the dynamics of the game. But what works for Sarileru Neekevvaru is the presentation, that stays faithful to Anil Ravipudi's realms of entertainment. Although there are a few incoherencies, the laughs and the moments make this an enjoyable ride.

Mahesh Babu is entertaining throughout the movie, whether he is beating people up or laughing at their expense. He doesn't indulge in prolonged somberness, and ensures that the audiences are never bored. In case you forgot the skill he showed with comedy in movies like Khaleja and Dookudu, Sarileru Neekevvaru is a pleasant reminder. It's only in his scenes with Vijayashanti that we see the subtle nuances that he had always been associated with until Pokiri arrived one day and changed it all.

Both Vijayashanti and Prakash Raj are great in their roles, and deliver solid performances. Vijayashanti has a surreal aura around her and a screen presence that screams royalty. Prakash Raj plays a character that he has portrayed multiple times already, and yet he is still great to watch. Rashmika Mandana's role is different from all those that she has done so far. Unlike in her previous outings, she does not matter to the story here, but whatever she gets to do, she takes the ball and runs with it. You can't help but smile every time Rashmika and Sangeetha appear on screen together. They are silly in an endearing way, and their lines are going to be fodder for hungry TikTokers for quite a while.

Ratnavelu is regarded as one of the finest technicians in India today, and when you compare how the iconic Konda Reddy Buruju is shown in Sarileru Neekevvaru to how it was shown in Okkadu, you can see his brilliance in all its glory. The Kurnool you see through his lens makes you fall in love with every single frame. All these visuals are further enhanced by DSP's background score. Any high you get, any nerve that is touched, any emotion that is stirred - they all have DSP's name written on them. He simply ups the ante with his music, and not a single sound feels out of place.

Ram-Laxman's fights are good, and get copious amounts of adrenaline and dopamine flowing in you. Sekhar Master has choreographed the songs well. Mind Block song is an eye-feast, and Mahesh's dance in this song will make his fans swell in pride.

Sarileru Neekevvaru is a full-on Mahesh Babu show despite the significant contributions from Vijayashanti and Prakash Raj. There are enough moments in the movie that make it more than a one-time watch. Anil and Mahesh manage to succeed in giving the audiences what they want, and it's now a fact that Sankranthi has arrived earlier than usual for Mahesh and his fans.
Share. Save. Connect.
Tweet
SARILERU NEEKEVVARU SNAPSHOT 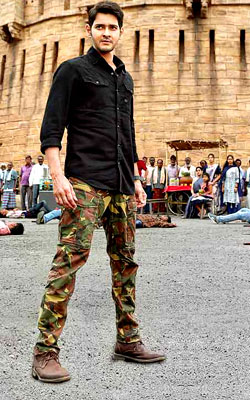 See Sarileru Neekevvaru full details
TOP COMMENT
RC on 9th Mar 2020, 6:52pm | Permalink
It is a little late, but I couldn't think of another place to say this.

It is so disheartening to see such regressive tropes in such high-profile movies. How can actors, no, super stars, like Mahesh Babu be asbolved from responsibility when they propogate tropes like the only solution after a rape is for the rapist to marry the victim. The stars are well-travelled, seemingly so 'modern' in their image, I can only imagine it is a lack of care for the impression they make on their many, susceptible viewers.

It is so disheartening to see such regressive tropes in such high-profile movies. How can actors, no, super stars, like Mahesh Babu be asbolved from responsibility when they propogate tropes like the only solution after a rape is for the rapist to marry the victim. The stars are well-travelled, seemingly so 'modern' in their image, I can only imagine it is a lack of care for the impression they make on their many, susceptible viewers.

It is equally disheartening to see Fullhyd give this slog of a movie 7.5.
rahulsachinsourav123 on 14th Jan 2020, 11:22am | Permalink
Its pretty entertaining movie and rating is apt. Mahesh in full massy avatar, Vijayashanti with that never lost appeal and screen presence, Prakash Raj back in form, lifted the film above average though its tad long. I liked the music & patriotism part also with with movie concluded instead of lot of blood flowing, swords flying, guns blazing and hundreds getting killed. As far as train comic scenes are concerned, they are logic less but supposed to be entertaining part and did their job. Thumbs up to Anil Ravipudi.
TFI lover on 14th Jan 2020, 1:29am | Permalink
I have rarely disagreed with reviews on this site, but unfortunately this is one that I completely disagree with.
The point that has hurt me most in the movie is Sangeetha's humor around her own child marriage - at what point did the writer/director think it was ok to make fun of the fact that she had a child marriage??
This is simply not ok and encouraging this kind of humor only takes us back as a society. All the dialogues from Rashmika/Sangeetha duo were extremely cringe worthy. Their rhyming dialogues, fawning over Mahesh Babu, the way they projected their own self-worth... horrible to say the least!
Other than Vijayashanti's character, all other women characters were modeled in very bad taste. This combined with how F2 treated its women characters, I would say there is something wrong with how Anil Ravipudi views women in general.
The songs were not at all worth the time and it was hard to believe they came from DSP!
Overall I would give the move a 5. The 5 is also purely because of Vijayashanti and Prakash Raj's performances.
Kanye on 12th Jan 2020, 4:47am | Permalink
Seriously? I was telling everyone that fullhyd reviews and ratings are the most accurate. This is embarrassing. I swear if AVPL gets a lower rating...

ADVERTISEMENT
This page was tagged for
sarileru neekevvaru full movie movierulz watch
mahesh babu rashmikamandhana movies
sarileru neekevvaru movie telugu full
sarileru neekevvaru full movie telugu
Sarileru Neekevvaru full
Follow @fullhyderabad
Follow fullhyd.com on
About Hyderabad
The Hyderabad Community
Improve fullhyd.com
More
Our Other Local Guides
Our other sites
© Copyright 1999-2009 LRR Technologies (Hyderabad), Pvt Ltd. All rights reserved. fullhyd, fullhyderabad, Welcome To The Neighbourhood are trademarks of LRR Technologies (Hyderabad) Pvt Ltd. The textual, graphic, audio and audiovisual material in this site is protected by copyright law. You may not copy, distribute, or use this material except as necessary for your personal, non-commercial use. Any trademarks are the properties of their respective owners. More on Hyderabad, India. Jobs in Hyderabad.