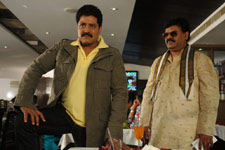 Kritika Deval / fullhyd.com
EDITOR RATING
1.0
Performances
Script
Music/Soundtrack
Visuals
2.0
2.0
1.0
2.0
Suggestions
Can watch again
No
Good for kids
No
Good for dates
No
Wait to rent it
No
Have you ever seen a really gruesome road accident? Well, neither have we. The experience of having watched Police Game, however, generated within us a well of empathy for those who have. We too, readers, have seen something so enchanting in its awfulness that looking away was simply not an option.

Police Game is a movie so awful, we willed ourselves to sit for five more minutes, like addicts staving off cravings, every time someone on the screen said things like, "Nijanga cheppandi, meeru nannu follow ayyaru kada? (Tell me the truth. You were following me weren't you?" in flirty and playful tones to an online "boyfriend", as if the whole scenario is somehow totally not creepy.

Police Game is a movie so awful, its highlights include one and a half fight sequences that look like badly made spoofs of already terrible '80s movies, somehow rendered in 2D whenever it is time for someone to go flying through the air.

Police Game is a movie so awful, it is probably being sent this very minute to an American Black Ops team to be used as a torture device, only to have the whole thing turn on them when those it has been used against one too many times turn into mind-sucking mutants.

If you still haven't managed to wrap your un-sucked brains around the Colossus of awfulness that is Police Game, here's the story.

Maverick Police Cop (sic) Radha Krishna (Srihari) is entrusted with the delicate mission of bringing down the Drug Mafia that is killing millions of youths even before they get started with achieving their Dreams of One Day Becoming the President of the United States of America, by no less a personality than DGP Naidu (Kota Srinivas Rao) (important because he has the ear of no less a personality than the Chief Minister himself).

The first idea that flickers for a while and then shines brightly atop Maverick Police Cop Radha Krishna's (he will henceforth be referred to as MaPCoRK) head is obviously the most obvious one. He opens a seedy bar, and makes it the most popular haunt for the city's coke-headed undead [they move in a slow, jerky fashion; try to eat their limbs; and walk relentlessly, slowly, and in mindless herds towards any hope of a fix, all the while growling "Braaaaaaaaaiiiiiins!" (That last bit was added for the effect.)].

He then proceeds to trick the Drug Mafia into bringing 100 kg of cocaine in one place so he can catch them red handed, and then beat the shit out of a weird dude with an ear tick, two black guys (Duh!), and two people in Arab costumes who say things like "Al Qaeda" and "Bomb" and "OLOLOLOLOLOLOLO! Habibi! Habibi!" (please, ignore our penchant for special effects). Way to go, cultural diversity!

Unfortunately for us, it is the weird dude with the ear tick who is the villain, and not the fun furriners. But then, unfortunately for us, this movie was made. So, anyway, Evil Ear Tick (dibs on indie rock band name!) gets away, because it has only been about 20 minutes since the movie began.

But wait. Did we hear someone say "twist in the story"? Because there is one, and it will nail your mind, the way Evil Ear Tick did to some loser's right at the beginning of the Game. Tick just slaps the guy around until the guy can't see, and ends up running into a gigantic nail conveniently placed on the wall at human height for exactly that purpose.

What were we talking about again? Right. Twist. MaPCoRK, you see, has a sister, Siri (Neenu Karthika, who probably won't be voice activated into killing that bitch that stole your boyfriend), who's into online dating, because she believes she is so beautiful that her personality is lost on one blinded by the bounty of beauteousness that is her.

She meets the perfect guy online, has a bit of vaguely rapey conversation with him, gives him her number in accordance with her MaPCo brother's sage advice, playfully jokes about being stalked by him, meets him exactly one time (also in accordance with her MaPCo brother's sage advice), and decides he is The One based on the fact that he gets her a ring. The Exact Same One She Gets For Him. We will pause for a few moments to allow you to process that.

Good, because we haven't gotten to the twist yet. Mr. The One Ring (nervously - har, har?), as it turns out, is one of Evil Ear Tick's henchmen. His first Indian Job for the Ear Tick Mafia was to snort some Charlie and shoot an old guy shouting "Drug Mafia, Down, Down!" in the chest.

Will MaPCoRK ever defeat Evil Ear Tick in a magnificent battle of unequals? Will he save Junkie One Ring so he can live another day to coke-headed undead-ly stalk Siri? Who's the bimbo who keeps wrapping herself around MaPCoRK pretending to be a cop, all the while talking only from her uterus? WHERE IN THE NAME OF ALL THAT IS UNNATURAL AND UNHOLY DID THEY FIND THOSE COLORS? These all-important questions are answered with all the finesse of Gulliver let loose in Smurf Village.

Like the sole survivors in a post-apocalyptic wasteland, Srihari, Kota Srinivasa Rao and other veterans heroically shoulder any and all acting chops required to make this travesty barely qualify as a movie. As for the rest, you will feel bad for them, as you would for a sad R2D2 short-circuiting due to an overload of emotions (and our life-long wish of inserting an unnecessary Star Wars reference has been fulfilled), or for the zombie who used to be the hero's mother and now must mercilessly be beheaded.

While the sets keep it really, really real, the camera work sticks to the theme and provides you with colours and images no sober mind can process without getting a day-long headache in the process.

The music, on the other hand, has no noticeable purpose other than allowing the men in the movie to publicly and legally feel-up the women, as they sing about romantic and sensitive things like how a no means a yes, and how she wants him and he knows it, et cetera, et cetera, et cetera.

Bottomline: While we've had bottomloads of fun making fun of this pile of bottomload, there is no reason for anybody to watch Police Game, unless you are part of the aforementioned Black Ops team and wish to test its efficacy as a torture device, or you have done something horrible (in which case you probably won't be watching it by choice).
Share. Save. Connect.
Tweet
POLICE GAME SNAPSHOT 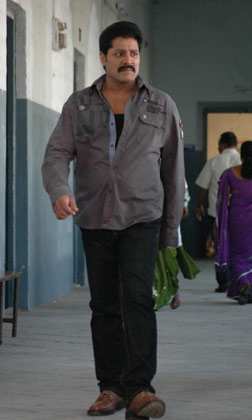 ADVERTISEMENT
This page was tagged for
cid.police.telugu.full.move
Police Game telugu movie
Police Game reviews
release date
Srihari, Bramhanandam
Follow @fullhyderabad
Follow fullhyd.com on
About Hyderabad
The Hyderabad Community
Improve fullhyd.com
More
Our Other Local Guides
Our other sites
© Copyright 1999-2009 LRR Technologies (Hyderabad), Pvt Ltd. All rights reserved. fullhyd, fullhyderabad, Welcome To The Neighbourhood are trademarks of LRR Technologies (Hyderabad) Pvt Ltd. The textual, graphic, audio and audiovisual material in this site is protected by copyright law. You may not copy, distribute, or use this material except as necessary for your personal, non-commercial use. Any trademarks are the properties of their respective owners. More on Hyderabad, India. Jobs in Hyderabad.