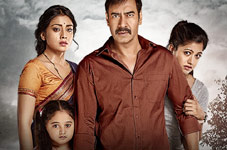 Zehra Abbas / fullhyd.com
EDITOR RATING
7.0
Performances
Script
Music/Soundtrack
Visuals
7.0
6.5
6.0
7.0
Suggestions
Can watch again
No
Good for kids
No
Good for dates
Yes
Wait to rent it
No
It was a matter of time before Bollywood muscled its way into the Drishyam club - the original 2013 Malayalam film starring Mohanlal has already seen remakes in Telugu, Kannada and Tamil. The Hindi version does its best to fit into this elite group, but fails to recreate the vitality of the original.

Vijay didn't learn much in school, but has learnt a lot from the movies. This includes a working knowledge of the law and police investigation methods that will come into play, rather spectacularly, later.

As with all good things, the Salgaonkar family's perfect existence is shattered one stormy night (an unforgivable cliché), when Nandini and Anju find themselves inadvertently embroiled in a serious crime. Vijay decides to launch a stunningly elaborate cover-up to protect his family.

His plan is complicated by IG Meera Deshmukh (Tabu), who has a personal stake in the matter - the case involves the disappearance of her son - and she is as determined as Vijay to uncover the truth. Hell hath no fury like a parent whose child is in danger, and the audience braces itself for an intense game of cat and mouse.

Devgn's performance is rather inconsistent, and we believe this has much to do with his recent cinematic gaffes (think Action Jackson). You see flashes of that subtle restraint that he has displayed well in the past, but his act teeters over into bland inexpressiveness quite often. Plainly put, he's not in form. That's a definite problem when the protagonist is a cerebral schemer because it's all too easy to try for poker face and end up with wooden face instead.

Shriya Saran doesn't help matters, either, and her over-the-top act is the proverbial boulder that drags Devgn down with her. The scenes of marital bliss between the two are particularly cringe-worthy. There's a scene where Vijay goes home early to his wife because he's been watching a Sunny Leone film in office! Is that supposed to endear Devgn's character to the female audience? Ick.

When Tabu walks into the frame at the end of the first half, your hope for the film is revived. She's great as the hard-boiled, ruthless cop, who has no qualms about resorting to police brutality in order to get to the facts, and swings effortlessly between emotions as disparate as anger, grief and desperation.

Tragically, the makers make a crucial error in failing to capitalize on the potential for creating a memorable predator in Meera Deshmukh. Even in the face of cheesy slow motion montages and overly dramatic background music, Tabu conveys a smouldering intensity and feline grace. But the script doesn't do her character justice at all - instead of giving her something substantial to do in the face of Salgaonkar's machinations, she just gets the suspects beaten black and blue. Director Nishikant Kamat seems overly concerned with presenting Devgn as the quintessential hero, and in the process fails to mine potentially explosive dynamics between Devgn's and Tabu's antagonistic characters.

Rajat Kapoor and Kamlesh Sawant deserve congratulations for their work. The former is brilliant as Meera's husband; he's the voice of reason and the foil to her violent determination. The latter, as Inspector Gaitonde, is a thoroughly realistic and believable villain - you will find yourself loathing his character, and he's a poster boy for every corrupt, brutal cop out there.

Locating the film in Goa and choosing to stay away from the usual touristy spots works well for Drishyam. The laidback vibe of the lush, green locales and the sinister events unfolding in an almost pastoral setting create an interesting contrast and add to the atmosphere of the movie.

At the end of the day, the story is king when it comes to the four Drishyam films, including this one. Whether it's an original by Jeethu Joseph or "inspired" by the Japanese novel The Devotion Of Suspect X, you can't deny that it's a great story. Even the most alert viewers will find themselves surprised by its interesting twists and turns. The script, however, required tighter writing, and the first half needed substantial editing. The pace of the film is slow, and that becomes painfully obvious when a movie is 163 minutes long.

Still, it will succeed in holding your interest for most of that duration thanks to its thought-provoking ideas about individual perspective and the distortions caused to it by the emotions of the parent-child relationship. You will find yourself rooting for Vijay, a man who circumvents the law in every conceivable way to protect his family, and that's when you know this story has succeeded in expanding your notions of right and wrong, and crime and punishment.

The big reveal at the end of the film will surprise you with its simplicity, and make you marvel at one man's manipulation of our over-reliance on visual memory.

Drishyam is worth a watch, especially if you haven't seen any of the other remakes. But is it a great film? It could have been, if they had the guts to cast Tabu as Salgaonkar instead. 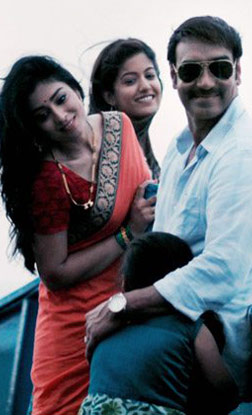 ADVERTISEMENT
This page was tagged for
drishyam hindi movie
Drishyam (Hindi) hindi movie
Drishyam (Hindi) reviews
release date
Ajay Devgn, Tabu
Follow @fullhyderabad
Follow fullhyd.com on
About Hyderabad
The Hyderabad Community
Improve fullhyd.com
More
Our Other Local Guides
Our other sites
© Copyright 1999-2009 LRR Technologies (Hyderabad), Pvt Ltd. All rights reserved. fullhyd, fullhyderabad, Welcome To The Neighbourhood are trademarks of LRR Technologies (Hyderabad) Pvt Ltd. The textual, graphic, audio and audiovisual material in this site is protected by copyright law. You may not copy, distribute, or use this material except as necessary for your personal, non-commercial use. Any trademarks are the properties of their respective owners. More on Hyderabad, India. Jobs in Hyderabad.