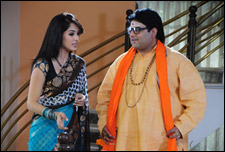 Deepa Garimella / fullhyd.com
EDITOR RATING
3.5
Performances
Script
Music/Soundtrack
Visuals
7.0
3.5
6.5
6.0
Suggestions
Can watch again
No
Good for kids
No
Good for dates
No
Wait to rent it
Yes
Surely, many will agree that Telugu cinema's "Tier II" comedians (Munna Venu, Khadgam Prithvi, Taagubothu Ramesh, Dhanraj, Raghu Karumunchi, etc.) are Tier II only in terms of screen-time allotted, and definitely not talent. Films like Naaku O Lover Undi are unfortunately the only platforms where these skilled laugh-masters get to strut their stuff, and it probably doesn't amount to much except a pay-cheque.

Beyond the novelty of the predictable "fat guy" brand of humour that usually revolves around any movie that has Krishnudu as its leading man, Naaku O Lover Undi is pretty much a standard-issue formula film. The bevy of gifted comedians it features helps make this a tolerable product, even if it cannot elevate it to a different league.

Krishna Sastry (Krishnudu) is training under his father (M S Narayana) to become a proficient veda-pandit. The senior Sastry is not very tolerant of modern thought, and has high aspirations for his son. He and his wife (Hema) speak Brahminese (or what filmmakers think Brahmins speak at home) to and keep squabbling. A rebel rock-music-listening, streaked-hair-sporting younger son Vedam (Master Bharath) completes the family picture.

Krishna Sastry's efforts to land a babe, and his subsequent love story involving Neelima (Rithika), make up the rest of the plot. There's a villain, some tension, some flashback, a flock of faithful friends, and a "twist", to keep things going.

The film's plot and its drama are tiresomely bland and silly. Thankfully, the comedy provides some respite. Ali and his ice weapon, Raghu Karumunchi's Telangana sarcasm, and the "Death Bureau" that consists of Munna Venu, Dhanraj and Taagubothu Ramesh, all have some good laughs packed in. Venu, specifically, has superb comic timing. Hema and Master Bharath have their moments, too.

Apart from its rotund hero (and a couple of other refreshingly realistic XL-sized people), one thing that separates NOLU from its hot-blooded counterparts is the absence of the typical hero's rage. But this also makes NOLU a juvenile movie that, to pitiably comic effect, feels like a plot made for a very second-grade comic book. Songs, romance, implausible fights (yes) and "sentiment" are all in here, but in doses that seem like the movie is aimed at kids and semi-adults with no particular alternatives of entertainment.

Krishnudu really needs to re-evaluate his emotional range - is this the only "style" that he will stick to? His childish mannerism and characterization might have worked for a film or two, but there is definitely more that he can do and be made to do. And the fat jokes that his characters are made targets of are usually quite silly (not to mention cruel, like all jokes on size and complexion that our films feature) and devoid of comic timing.

Rithika, the heroine, is quite expressive. The comedians, like we said, are all good, but the villain is a bummer.

The music is good - with K M Radhakrishna being credited for it, you wouldn't be too surprised. The production values are above average.

Skip this film at the theatres with no regrets, but the comedy will find its way to your small screen soon.
Share. Save. Connect.
Tweet
NAAKU O LOVER VUNDI SNAPSHOT

ADVERTISEMENT
This page was tagged for
naaku o loverundi full movie download
naku o lover undi
Naku O Lover Vundi
Naaku O Lover Vundi telugu movie
Naaku O Lover Vundi reviews
Follow @fullhyderabad
Follow fullhyd.com on
About Hyderabad
The Hyderabad Community
Improve fullhyd.com
More
Our Other Local Guides
Our other sites
© Copyright 1999-2009 LRR Technologies (Hyderabad), Pvt Ltd. All rights reserved. fullhyd, fullhyderabad, Welcome To The Neighbourhood are trademarks of LRR Technologies (Hyderabad) Pvt Ltd. The textual, graphic, audio and audiovisual material in this site is protected by copyright law. You may not copy, distribute, or use this material except as necessary for your personal, non-commercial use. Any trademarks are the properties of their respective owners. More on Hyderabad, India. Jobs in Hyderabad.