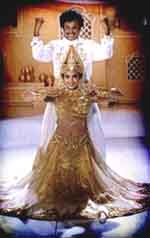 Bhargav Shastry / fullhyd.com
EDITOR RATING
6.0
Performances
Script
Music/Soundtrack
Visuals
NA
NA
NA
NA
Suggestions
Can watch again
NA
Good for kids
NA
Good for dates
NA
Wait to rent it
NA
Every man has dreams. And if an opinion is taken about reality, a deafening shriek will be heard: 'Reality sucks!' That is the reason that agents who make us escape from the 'is' to the 'will never be' world are perceived as God, more so when we have made that 'escape' a daily part of our lives.

Cinema is one such agency, and the most powerful one too. We extrapolate the roles of the actors to reality, giving these agents of dreams a larger than life persona, that of a messiah. Few actors survive this extrapolation, and those who do, become God. Rajanikanth is one such example.

Only destiny can explain his rise from a bus conductor in Bangalore to a guy who has a temple built for him in Chidambaram. His muffler-slinging, cigarette-puffing antics have made him an ambassador for Tamil movies the world over. In fact, the Tamil version of this movie ran for 115 days in Tokyo without sub-titles! Every movie of his is a bigger commercial hit than his previous one. His movies are festivals for his fans. And Muthu Maharaja, a dubbed version of the massive Tamil hit, Muthu, is no less.

Muthu (Rajani), a loyal servant working in a zamindari household, is the darling of the entire village, including the matriarch of the house and her son, Raja. Raja falls in love with a stage actress, Radha (Meena). But Radha and Muthu are already in love. Then there is the evil brother of the lady, who plans to usurp her wealth by marrying off his daughter to Raja.

Then is the entry of an old man (Rajanikanth again), with a mysterious aura, into the village. Everybody treats him with reverence. The story takes a twist when Raja misunderstands Muthu and blames Muthu for having betrayed him by loving Radha and throws him out. His mother then spills the beans about Muthu's reality.

The flashback shows that the old man is the actual owner of the estate and Muthu is his son. His dewan, who happens to be the lady's husband, betrays him. In disgust, he hands over the entire property to the dewan and leaves. The dewan's wife pleads him to leave Muthu with her. The zamindar poses a condition that Muthu should not be brought up amidst wealth but in a very humble way.

The dewan, meanwhile, commits suicide due to guilt. Raja regrets his action after hearing the story, and after some goon-bashing, the story ends on a happy note with Muthu being reinstated as the Zamindar.

The lingual divide should not be a problem to have a try at this entertainer. The dubbing is a bit patchy. Rehman scores on the music front. People unaware of Rajnikanth's popularity can go and check out on what makes this star is an icon.
Share. Save. Connect.
Tweet
MUTHU SNAPSHOT

ADVERTISEMENT
This page was tagged for
Muthu tamil movie heroine
muthu movie telugu
Muthu movie old review telugu
Muthu telugu movie
Muthu reviews
Follow @fullhyderabad
Follow fullhyd.com on
About Hyderabad
The Hyderabad Community
Improve fullhyd.com
More
Our Other Local Guides
Our other sites
© Copyright 1999-2009 LRR Technologies (Hyderabad), Pvt Ltd. All rights reserved. fullhyd, fullhyderabad, Welcome To The Neighbourhood are trademarks of LRR Technologies (Hyderabad) Pvt Ltd. The textual, graphic, audio and audiovisual material in this site is protected by copyright law. You may not copy, distribute, or use this material except as necessary for your personal, non-commercial use. Any trademarks are the properties of their respective owners. More on Hyderabad, India. Jobs in Hyderabad.