That Girl In Yellow Boots Review 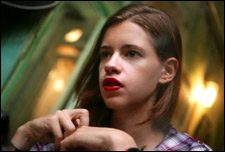 Nupur Barua / fullhyd.com
EDITOR RATING
7.0
Performances
Script
Music/Soundtrack
Visuals
7.0
8.0
6.0
7.0
Suggestions
Can watch again
Yes
Good for kids
No
Good for dates
No
Wait to rent it
No
If there is one man who can make indie films a hit in India, it is Anurag Kashyap. It takes some nerve to co-write a story like That Girl In Yellow Boots with one's wife and then make her act as the lead in it. Reportedly, both Kalki and Anurag disagreed on the end - he wanted to end the movie on an unhappy note, because he felt that real life is not a walk in the park. And yet, besides the Kashyap-esque tone of despair and melancholy, Anurag Kashyap's latest movie has to be his best till date - if you can digest it, that is.

Ruth Edscer (Kalki Koechlin) is a British citizen in Mumbai, perpetually in yellow boots, who goes through the usual drill of bribing authorities to extend her tourist visa and to overlook her illegal job at a massage parlour.

She has been in India for a while now, all because of a letter that her estranged father wrote to her. As she survives each day in the madness of Mumbai, she never loses sight of her goal - to find the father who abandoned her mother and her, after her older sister died, 15 years ago.

Ruth learns to adjust to Mumbai and all the sleaze that comes with it. Her boyfriend Prashant (Prashant Prakash) is a "distraction", with his zeal for sex and his irreparable drug addiction. When he gets into trouble with the Kannadiga don Chittiappa Gowda (Gulshan Devaiah), she has to pay the price.

At her massage parlour, which is run by a phone-addict Maya (Puja Sarup), Ruth is most popular, especially for her 'extra' services. A regular customer called Diwakar (Naseerudin Shah) is a father figure in her life, and she shares with him her fears and joys. And thus life carries on, with Ruth becoming more and more street-smart and manipulative, and even cold-hearted and selfish, just as the city demands.

The story is bold and executed well. The climax is shocking and audacious, and may not be suitable for all audiences.

That Girl In Yellow Boots is Kalki Koechlin's redemption for her rather unimpressive roles Shaitan and Zindagi Na Milegi Dobara. This is where she reminds you why Dev D. made her a star. She plays the British white girl, who is alienated in India, flawlessly (except in certain scenes where she tries too hard with the British accent). At no point do you feel too sorry for her, nor do you want her to fail in her endeavour. Kalki said in a recent interview that growing up as a white-skinned kid in a brown India was not easy. She has probably just relived those experiences on screen.

Prashant Prakash as the confused boyfriend makes an impressive debut. His portrayal of a cocaine addict is eerily realistic. He also provides some comic relief, unknowingly. Puja Sarup is sublime as the spa owner. Watch out for the scenes where she chats with some admirer or the other on the phone. Naseerudin Shah is convincing in his underplayed role as the benign, concerned, avuncular customer.

The person who lights up the screen in this otherwise depressive movie is Gulshan Devaiah. Speaking in a Kannada accent may come naturally to him, but his expressions and his language will keep you in splits. He has the best dialogues, and even recites a few lines from the eternal Rajkumar song, 'If you come today, it's too early' (makes you want to log in to Youtube and listen to the classic song all over again). Again, Shaitan did not showcase his talent at all. That Girl In Yellow Boots does.

And, since he can, Anurag Kashyap has a host of famous faces making guest appearances for simple scenes (Ronit Roy, Makarand Deshpande, Piyush Mishra, Divya Jagdale, to name a few), and even Rajat Kapoor appears in a passing shot (just a glimpse).

To remind you that this is not a happy masala movie, the director shoots in low light and in confined, congested spaces. Production design is quite effective, especially the massage parlour and Ruth's derelict apartment.

There is a complete lack of beautification of frames or characters, but Kalki looks great, with her smile and her teeth - a cross between Bugs Bunny and Julia Roberts, as one of the characters points out.

Watch That Girl In Yellow Boots only if you can handle the unspeakable. And do not take your date with you, because you may not be in the mood for conversation after the movie is over.
Share. Save. Connect.
Tweet
THAT GIRL IN YELLOW... SNAPSHOT
THAT GIRL IN YELLOW BOOTS SNAPSHOT

ADVERTISEMENT
This page was tagged for
That Girl In Yellow Boots hindi movie
That Girl In Yellow Boots reviews
release date
Kalki Koechlin, Prashant Prakash
theatres list
Follow @fullhyderabad
Follow fullhyd.com on
About Hyderabad
The Hyderabad Community
Improve fullhyd.com
More
Our Other Local Guides
Our other sites
© Copyright 1999-2009 LRR Technologies (Hyderabad), Pvt Ltd. All rights reserved. fullhyd, fullhyderabad, Welcome To The Neighbourhood are trademarks of LRR Technologies (Hyderabad) Pvt Ltd. The textual, graphic, audio and audiovisual material in this site is protected by copyright law. You may not copy, distribute, or use this material except as necessary for your personal, non-commercial use. Any trademarks are the properties of their respective owners. More on Hyderabad, India. Jobs in Hyderabad.