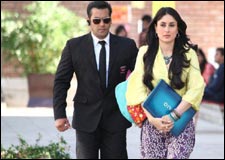 Nupur Barua / fullhyd.com
EDITOR RATING
7.0
Performances
Script
Music/Soundtrack
Visuals
6.0
4.0
7.0
7.0
Suggestions
Can watch again
Yes
Good for kids
Yes
Good for dates
Yes
Wait for OTT
No
For several audiences, Salman Khan is reason enough to catch this Eid release. Even if you're not a Salman fan, you might probably want to watch it to understand how a star can save a script that not even the writer understands even though this is his third version of the film.

You would think that Siddique, who wrote the story for movies such as Hulchul and Hera Pheri, has a sense of humour, but if you look for it in his directorial venture Bodyguard, you might be disappointed.

Further, interestingly, Salman Khan's father Salim Khan is credited with being the "script consultant" for Bodyguard. Maybe Siddique thought that keeping the father in the loop would ascertain that the son did not walk out halfway through a film that makes no sense.

Bodyguard doesn't have the ingredients that a typical Sallu film has - there's no comedy, it is surely not an action film, and neither is this a romantic film - except Salman Khan himself.

The plot revolves around Lovely Singh (Salman Khan), a trained bodyguard who is hired by Sartaj (Raj Babbar) to be his daughter Divya's (Kareena Kapoor) shadow. Divya, a student in Pune, is understandably irritated with the intrusion, so she hatches a plan with her best friend Maya (Hazel Keech) to get rid of Lovely.

The rather flimsy plan is this - Divya will call Lovely from her phone (secured/private number), disguise her voice (dubbed by Karishma Kapoor), and get him to fall in love with her. She thinks that once he is in love he will be too distracted to follow her around all the time.

However, when some villains attack her at a nightclub, she realises that Lovely is an essential part of her life, and promptly falls in love with him.

Since there is no future between them, Divya decides not to reveal the identity of the mysterious caller. In the meantime, some villains keep attacking Divya, and Lovely keeps defending and protecting her.

The story then goes into a twist, followed by another twist, and ends conventionally. However, it seems like ages before everybody lands up where they are supposed to.

The lack of action in Bodyguard unfortunately throws the spotlight on several of its logical loopholes. For example, Divya's sacrifice has no apparent reason. In another example, Sartaj is portrayed as a just and fair man who has his own system of justice, but he also seems to have these goons around him carrying out dubious business. It is easy for him to ask one of them to kill somebody, with just one nod, making you wonder why the villains are the bad guys.

We're also told that Lovely's father was a loyal servant who died for his master, but are never given more than a glimpse of this angle. In fact, even the villains have an old relationship with this man, which is not explored.

Minor glitches exist as well, like the scene where she calls Lovely from a private number, anonymously - wouldn't Lovely, her own bodyguard, have her number stored in his phone?

This is Salman Khan's return to the genre he began with - romance (well, almost - more like action-romance). He sings, dances, and flexes his muscles with ease, in Dabangg and Wanted style. However, since he is more soft-spoken than brash in Bodyguard, he ends up looking tired and subdued.

Kareena Kapoor looks good in her Manish Malhotra clothes. She does the best she can in a male-oriented film, but, surprisingly, the story revolves more around her than the hero.

Himesh Reshammiya has managed to surprise his worst critics with the music he has composed for Bodyguard. Shot aesthetically, these songs are already big hits. The cinematography is superior, but with a weak story, there is only so much you can do.

See Bodyguard full details
BODYGUARD USER REVIEWS
1 - 1 OF 1 COMMENTS
POSITIVE  |  NEGATIVE |  NEWEST  |  OLDEST  |  MOST HELPFUL  |  LEAST HELPFUL
USER RATING
3.0
1 USER
Performances
Script
Music/Soundtrack
Visuals
4.0
3.0
6.0
5.0
Can watch again - No
Good for kids - No
Good for dates - No
Wait for OTT - Yes
singhprashast2011 on 9th Sep 2015, 8:17pm | Permalink
I had never expected this from Salman Khan. After watching Ready, I had thought that he would make such a nonsense film. A big disappointment overall! I have a belief that action movies never fail to entertain , but this myth was broken after I watched this film. I will not say anything more as I have already described what the film it is- a mindless entertainer with nonsense comedy and a few action scenes.scenes. At least,there would have been a few jokes and focus on the story, but however even the junked story does not work well at all.Neither Salman nor his body made it a film. It was more a cartoon to launch him as a hero. This film can't be compared to his previous blockbusters as this is not even a film. The worst film of the year!

ADVERTISEMENT
This page was tagged for
Bodyguard hindi movie
Bodyguard reviews
release date
Salman Khan, Kareena Kapoor
theatres list
Follow @fullhyderabad
Follow fullhyd.com on
About Hyderabad
The Hyderabad Community
Improve fullhyd.com
More
Our Other Local Guides
Our other sites
© Copyright 1999-2009 LRR Technologies (Hyderabad), Pvt Ltd. All rights reserved. fullhyd, fullhyderabad, Welcome To The Neighbourhood are trademarks of LRR Technologies (Hyderabad) Pvt Ltd. The textual, graphic, audio and audiovisual material in this site is protected by copyright law. You may not copy, distribute, or use this material except as necessary for your personal, non-commercial use. Any trademarks are the properties of their respective owners. More on Hyderabad, India. Jobs in Hyderabad.