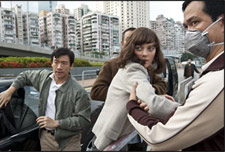 Samrat Sharma / fullhyd.com
EDITOR RATING
8.5
Performances
Script
Music/Soundtrack
Visuals
8.5
9.5
7.0
9.0
Suggestions
Can watch again
NA
Good for kids
NA
Good for dates
NA
Wait to rent it
NA
You will get your review, yes sir, but if you are impatient, get this: Contagion is a stunning, beautiful film with humanity, emotion and genuine cinematic tension, and may yet be the most perfect film about a fictional worldwide epidemic. Watch it, and go right now if the name Steven Soderbergh means anything at all to you.

This is a linear story that takes us through a worldwide epidemic that affects millions of people. Even so, the way each tale intertwines with the other, the way a complex web of narrative is woven in front of us, it will hardly do it justice to count off the myriad stories that make up this film.

This is a brave film that takes small stories and uses them to convincingly create a realistic global pandemic, as well as tell complex stories about human survival, guilt, hope and love.

It would have been easy to create a zombie story without zombies, or a film about the end of the world. These are plots that have been done to death, and the sheer originality this film carries belies that. No, this is instead a grounded and realistic story of a year-long phenomenon and how humanity overcomes it eventually, albeit painfully.

Contagion starts with a woman getting sick in Hong Kong and quickly becoming a global scare. It would do the film a great disservice for me to divulge any more, but it covers everything in scientific and emotional detail. Scientists, paramedics and world leaders organise, study and respond to every single event, and stories of courage, sacrifice, greed, and fear are told in the midst of every single important event of this epidemic.

While the film tries to be as economic as possible in making these sub-plots as short and important as possible, Laurence Fishburne's high ranking official and Matt Damon's most immediately affected citizen get the most screen-time. Rightly so, as these 2 completely different ends of a story carry the film through, giving it humanity and yet not pandering to the politics of big versus small governments.

If there is a complaint that will rise about this movie, it is that it moves fast between one story and another and very quickly so. Don't be deterred by that. It is a rare film that creates small moments, and yet with absolute precision lays bare every single fear, desire, and emotion of every single human in such a short time. This is a script worth studying, and this is a movie worth analysing for its virtuoso use of screen-time and our involvement.

Contagion frequently looks gorgeous, especially with the lovely cinematography by Soderbergh's camera techniques. This is a rare treat for us, and a privilege to watch so many different locales, people and cinematic emotional pieces through this awesome auteur lens.

Contagion will scare you, and yet engulf you with deep sadness and a new found appreciation for your loved ones. This is powerful cinema - the only kind we should be allowed to make. Watch as soon as you can.
Share. Save. Connect.
Tweet
CONTAGION SNAPSHOT

ADVERTISEMENT
This page was tagged for
Contagion english movie
Contagion reviews
release date
Gwyneth Paltrow, Matt Damon
theatres list
Follow @fullhyderabad
Follow fullhyd.com on
About Hyderabad
The Hyderabad Community
Improve fullhyd.com
More
Our Other Local Guides
Our other sites
© Copyright 1999-2009 LRR Technologies (Hyderabad), Pvt Ltd. All rights reserved. fullhyd, fullhyderabad, Welcome To The Neighbourhood are trademarks of LRR Technologies (Hyderabad) Pvt Ltd. The textual, graphic, audio and audiovisual material in this site is protected by copyright law. You may not copy, distribute, or use this material except as necessary for your personal, non-commercial use. Any trademarks are the properties of their respective owners. More on Hyderabad, India. Jobs in Hyderabad.