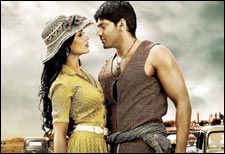 Harika Vankadara / fullhyd.com
EDITOR RATING
5.5
Performances
Script
Music/Soundtrack
Visuals
7.0
6.0
6.0
7.0
Suggestions
Can watch again
No
Good for kids
Yes
Good for dates
Yes
Wait for OTT
No
A film that looks as beautiful as the erstwhile Madras town in which it is set, 1947 A Love Story is a welcome relief from those looking for a respite from the mediocrity being churned out by our local film industry in the past few months.

However, despite being a near-perfect concoction of romance, action, drama and comedy, 1947 is a little too slow and sober for the festive season. Originally Madrasapattinam in Tamil, this dubbed production is an art movie designed mainly for those who find comfort in mood cinema, and will not set the box office on fire.

The story is a sequence of events recalled by an octogenarian Britisher, Amy (Carole Trangmar-Palmer), interspersed with her present-time search for her long-lost love, Malli. Malli (Arya) is a washerman and kusti enthusiast, and the young Amy Wilkinson (debutant Amy Jackson), the daughter of the then Governor of Madras. Amy is a photographer by passion, and Fate has the two crossing paths time and again early on, with Amy admiring Malli's raw courage.

What makes their love story novel is the fact that they convey their love to each other without sweet nothings or even a single "I love you". Also melting hearts is the slightly impractical manner in which Malli immortalizes his lover by setting up a bunch of institutes for social welfare - he was, after all, only an impoverished dhobi earlier.

A L Vijay (who has written and directed the film) must be lauded for the manner in which he makes the love story of the lead pair just as important as the national independence struggle in the backdrop. This he achieves by communicating that the lovers are fighting for the same thing that the nation is struggling for - the right to lead their lives on their own terms.

Some of the characterization is quite realistic. Malli is a youth with a sound body and mind, who brims over with rage over the Britishers' subjugation of him and his people, but he knows he must pick his battles.

Amy is an English gentlewoman in every way, with a pretty face and a petite form. However, she is no damsel in distress - her dainty hands can very well wield a sledgehammer to protect herself and her lover in the hour of need. Certain minor characters, too, have been sketched well. Only, the villain, Robert (Alexx O' Nell), is a stereotypical Satanic English officer who considers Indians as nothing more than flies to be swatted for entertainment.

But then, like we said, 1947 is merely art movie meant to be dissected by film festival regulars, and is unlikely to find takers among a wider audience. Plus, the fact that everything is written in Tamil, from personal letters to name boards, tends to alienate Telugu audiences. Given that Amy is shown as learning the "native" language from Telugu books, the editing team could surely have had the boards written in Telugu.

Arya is known to Telugu audiences for his performance in Varudu, and this movie only strengthens his position as an actor. Amy Jackson and Alexx O' Nell, too, perform laudably. Nasseer does his bit for the film in his limited role as Malli's mentor.

Technically, the film is a finely-crafted product. The movie reminds you of Lagaan more than once. 1947 A Love Story recreates the splendor of the erstwhile Madras as effectively as Lagaan captured the essence of Gujarat. Also, Malli's dressing style is quite similar to Aamir Khan's costume in the 2001 blockbuster.

The natural beauty of Madras as it was more than 6 decades ago, the grandeur of English mansions, the prototypes of intra-city railways and the simple dwellings of those serving the British have all been set up in a convincing manner. Resplendent backdrops, replete with the ageless beauty of ancient constructions, complete the visual effect of the movie.

The songs are aptly placed, and the tunes will not be forgotten in a hurry.

See 1947 A Love Story full details
TOP COMMENT
sreetheja on 2nd Sep 2011, 7:57pm | Permalink
This is a must watch film. We dont have guts to make movies like this at least we have to encourage by watching these movies.VIJAY Sir hats off to you

ADVERTISEMENT
This page was tagged for
1947 a love story movie telugu video language:en
1947 a love story full movie in telugu
1947 a love story full movie download in telugu
1947 A Love story full movie Telugu download
1947 A Love Story Telugu full movie watch online
Follow @fullhyderabad
Follow fullhyd.com on
About Hyderabad
The Hyderabad Community
Improve fullhyd.com
More
Our Other Local Guides
Our other sites
© Copyright 1999-2009 LRR Technologies (Hyderabad), Pvt Ltd. All rights reserved. fullhyd, fullhyderabad, Welcome To The Neighbourhood are trademarks of LRR Technologies (Hyderabad) Pvt Ltd. The textual, graphic, audio and audiovisual material in this site is protected by copyright law. You may not copy, distribute, or use this material except as necessary for your personal, non-commercial use. Any trademarks are the properties of their respective owners. More on Hyderabad, India. Jobs in Hyderabad.