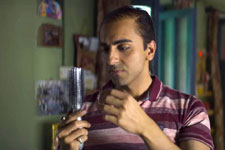 Punarvasu Pendse / fullhyd.com
EDITOR RATING
5.5
Performances
Script
Music/Soundtrack
Visuals
6.0
4.0
7.0
5.0
Suggestions
Can watch again
No
Good for kids
No
Good for dates
Yes
Wait for OTT
Yes
In the recent past, there has been this trend of semi-mainstream Bollywood cinema embracing an unconventional concept, and treating it as the "be all and end all". Generally set in small-town India, these films put way too much emphasis on the idiosyncrasies of the characters they portray.

Real life, however, is a little different - varied individual experiences shape the narrative here - and this one-track fixation on the core idea tends to take away from the movie as a whole. Between their shallow social commentaries and somewhat formulaic third acts, such films seem like they symbolize the city slicker's gaze on semi-urban India.

Director Amar Kaushik, who avoided the aforementioned pitfalls with the original and pleasantly surprising Stree, unfortunately succumbs this time around.

Balmukund "Bala" Shukla (Ayushmann Khurrana) has earned that nickname due to his silky mop of hair in school, which coupled with his knack for mimicry makes him the "in" kid at school. Fast forward to 2019, though, and Bala is plagued by alopecia (baldness) that is likely caused by his diabetes. The entirety of the first half is Bala trying various pieces of "household knowledge" to curb his hair loss - often to comical and/or disgusting ends.

His all-too encouraging family fulfills his every whim, and the only person who is at odds with Bala is his neighbour Latika Trivedi (Bhumi Pednekar), whose dark skin was the cause of much bullying from Bala when they were school kids. A wig brings Bala some much needed confidence required to woo the woman of his dream, local model Pari Mishra (Yami Gautam). A whirlwind wedding approaches, and with it comes impending doom, as Bala's situation threatens to get hairy as his lies get unentangled.

Bala is funny at first, very much so. The gags that deal with the protagonist's hair loss, the authentic Kanpur slang, a couple of fantastic songs that actually seem to tie in to the plot... it gets quite a few things on point. The TikTok videos that Bala and Pari shoot are especially ingenious - they get the old-school vibe bang on (more so when coupled with Ayushmann's effective impersonations of '90s Bollywood stars) while simultaneously poking fun of people's need for validation on social media.

Where it starts to fall apart is in its message. As a film that preaches self-acceptance, Bala is all the more problematic. The casting is bizarre, to say the least. The self-assured, independent female character is the dark-skinned Latika, but is played by Bhumi Pednekar in brownface (Bollywood has been able to manage this feat TWICE in a calendar year). How do the filmmakers not find a single dark-skinned actor in the entire country to play the one role that that favours their natural skin tone in a society obsessed with fairness?

My other gripe is the way they have dealt with Bala's and Pari's characters. Bala is entitled, dishonest, and seems to lack empathy for most of the film, yet we are constantly expected to see him as the hero. Not just that, we, as the audience, are actually expected to empathize with him. His behaviour is more akin to that of an overgrown child than of an adult, he treats his family like dirt, and is still mollycoddled by his relatives. Pari is treated the exact opposite way - her genuine concerns are dismissed as shallow and facile. Here's an idea the writers of this film could use - hey, maybe relationships are actually based upon trust, and said relationships are more likely soured by deceit or a lack of honesty than superficial reasons.

Ayushmann Khurrana is effortless as Bala - he seems to have settled into the role of "small-town man with a quirk" almost to the level of being typecast. Bhumi Pednekar, similarly, plays the strong-willed woman with ease. Yami Gautam is convincing as a small-town model and TikTok sensation - her over-the-top dramatic character lets her display some surprisingly good comic timing. The supporting cast, like that in most of Ayushmann's movies, is stellar - a monologue by Dheerendra Kumar Gautam who plays Bala's brother is particularly hilarious.

The music by Sachin-Jigar is uplifting and fun, and for once has tracks which actually feel like they belong in the movie. "Tequila", particularly, is something you're guaranteed to want to shake a leg to. The post-credits song by Badshaah is a direct ripoff of a track by Rouge and Dr. Zeus, "Don't Be Shy", that most millenials would instantly recognize, and has courted controversy for the same - but you're going to be humming it all the same.

Bala is not as one-dimensional as the other film about male pattern baldness that released this month, but that's not saying much. Watch it if you must, but take its message about acceptance as it speaks, not as it does.
Share. Save. Connect.
Tweet
BALA SNAPSHOT 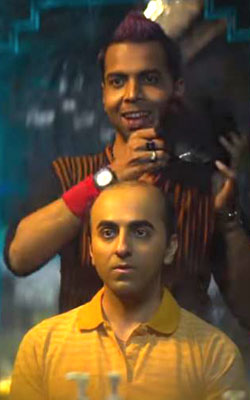 ADVERTISEMENT
This page was tagged for
Bala hindi movie
Bala reviews
release date
Ayushmann Khurrana, Bhumi Pednekar
theatres list
Follow @fullhyderabad
Follow fullhyd.com on
About Hyderabad
The Hyderabad Community
Improve fullhyd.com
More
Our Other Local Guides
Our other sites
© Copyright 1999-2009 LRR Technologies (Hyderabad), Pvt Ltd. All rights reserved. fullhyd, fullhyderabad, Welcome To The Neighbourhood are trademarks of LRR Technologies (Hyderabad) Pvt Ltd. The textual, graphic, audio and audiovisual material in this site is protected by copyright law. You may not copy, distribute, or use this material except as necessary for your personal, non-commercial use. Any trademarks are the properties of their respective owners. More on Hyderabad, India. Jobs in Hyderabad.