There are still some golden rules in filmdom, and one of them might well be - don't mess with the classics. And in children's animation, apart from the usual Cinderellas and Snow Whites, it doesn't really get much more classic than The Jungle Book. Rudyard Kipling's man-cub Mowgli and his rather furrier buddies have been icons of children's imaginations for decades, and the 1967 original was a landmark in children's entertainment. Ask any of the at least two generations of parents since then. But Mr. Trenbirth, dude... some films were just not meant to have sequels.

Disney's latest venture starts with something of a recap and the shadow puppet show brings back a few fond images. When we saw him last, Mowgli was lured from the jungle to the village by cute Shanti (Mae Whitman) and he's now been adopted by a Sardar family and even has a cute toddler step-brother, Ranjan. 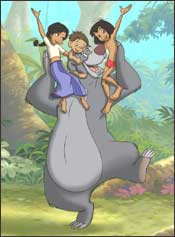 Now you can take the boy out of the jungle but you can't take the jungle out of the boy - and Mowgli pines for his pal Baloo the bear (John Goodman). Baloo feels the same way, and despite Bagheera and Colonel Hathi's efforts to stop him, sneaks into the village. And boy 'n' bear make off to the land of bare necessities.

But the show simply must to go on, for at least another 45 minutes, or the makers of the flick might have been beaten to pulp by an army of 6-year-olds and their even angrier parents. So we have Shanti displaying some guts and a very juvenile version of the you-Tarzan-me-Jane syndrome chasing after Mowgli into the jungle. And she's followed by Ranjan, mainly there to provide the 'awwwwww...' factor for mums getting slowly pissed off because the boring movie is not keeping the kids occupied and out of their hair, like they thought.

Anyway, old characters like the vultures (remember "What shall we do? I dunno... what do you want to do?"), Kaa the snake ("Trussssst in meee...jussssst in meee") and others come and go like guest appearances by the old cast of Cheers on Frasier or Becker. But the delightfully wicked Sher Khan still wants to settle old scores, and is after Mowgli. And he now has new prey in Shanti and Ranjan too... 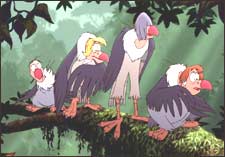 Phil Collins as a new vulture, Lucky, has a ticklish, almost Cockney accent, and comes up with some typical British pub humor. I just couldn't get enough of Tony Jay as the delectable Sher Khan - the film needed a lot more of him. John Goodman does a good job as Baloo and Haley Joel Osment as Mowgli sounds decently happy - guess he ain't seeing so many dead people now. His singing voice needs some work though.

Which brings me to the music. What sort of sequel plays the main song of the original three times in 75 minutes of movie? One which is desperately hoping to piggyback its way to the bank on the success of the original is my guess. It does have a couple of original songs, including the reasonably catchy 'Jungle Rhythm', but is not a patch on the daddy film.

And the graphics - in today's world of CGI and hi-tech computer animation, The Jungle Book 2 has tried to retain the old texture and feel. But without a strong story, it just looks really, and sadly, dull. The happiest moments for the audience were Kaa's brief appearance, Ranjan (mainly for the afore mentioned 'awwww' factor) and "Bare Necessities". And most of the fun is because it reminds you of the original.

ADVERTISEMENT
This page was tagged for
The Jungle Book 2 (English) english movie
The Jungle Book 2 (English) reviews
release date
(voices of) John Goodman, Haley Joel Osment
theatres list
Follow @fullhyderabad
Follow fullhyd.com on
About Hyderabad
The Hyderabad Community
Improve fullhyd.com
More
Our Other Local Guides
Our other sites
© Copyright 1999-2009 LRR Technologies (Hyderabad), Pvt Ltd. All rights reserved. fullhyd, fullhyderabad, Welcome To The Neighbourhood are trademarks of LRR Technologies (Hyderabad) Pvt Ltd. The textual, graphic, audio and audiovisual material in this site is protected by copyright law. You may not copy, distribute, or use this material except as necessary for your personal, non-commercial use. Any trademarks are the properties of their respective owners. More on Hyderabad, India. Jobs in Hyderabad.