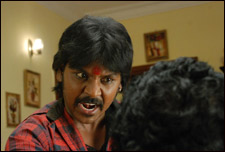 Deepa Garimella / fullhyd.com
EDITOR RATING
5.5
Performances
Script
Music/Soundtrack
Visuals
8.0
5.5
6.0
7.0
Suggestions
Can watch again
No
Good for kids
No
Good for dates
Yes
Wait to rent it
Yes
Even if you haven't been to the first-day-first-show show of Kanchana at Odeon Deluxe and internalized the frenzied drumbeats celebrating the release of Raghava Lawrence's latest film, you need but one cursory glance through the first several scenes from Kanchana to know this: Lawrence sells.

More importantly, he knows he does, and he knows what to do with that ability to sell. The credit to Kanchana's watchability goes mainly to the upbeat spirit and energy he infuses throughout the movie - when not being a dancer/hero, then when being a filmmaker.

Kanchana is a horror-comedy (dubbed from Tamil), meant to be a sequel to Muni, Lawrence's earlier movie from the same genre. Lawrence plays Raghava, a hero-types who seems all normal except when darkness falls - he is so scared of ghosts he takes his mother along when he has to pee at night.

Unfortunately, an otherwise harmless set of cricket stumps manages to sneak into his home a real ghost that is fully in its element. The ghost gradually makes its presence felt amongst Raghava's family, scaring the hell out of the 2 people who see/experience it - his loud mom (Kovai Sarala) and his vadina (Devadarshini).

Things turn a little gruesome when the ghost gets violent, and it is now time to hear the story of its tormented past and why it seeks revenge. To its credit, Kanchana's flashback does well up dry eyes.

Before the interval sets in, the film is quite an entertainer, thanks to its horror and its humour. This is not a special effects film, and relies only on "subtle" horror that sneaks up behind you. The scares come through only in the form of split-second glimpses of a shadow or a black smoky haze, and maybe a flash or two of a mangled corpse.

Lawrence is good as an entertainer, and his antics with his family and his heroine (Lakshmi Rai) make up the hilarious bits of the film. As for his dances, they're good as expected, but there's nothing particularly spectacular there, except for the impressive song with the physically-challenged people dancing.

That said, Kanchana is a flick whose first half promises a lot but whose second half is busy just trying to end. The few thrills, effective though they are, are finished with pretty soon. The ending of the movie fizzles out with a drab finale that is high on gore and mindless violence, and low on novelty.

Logic isn't the USP of the movie, and questions remain. What happens to the family that lives beside the spooky plot of land? Why is the rocking horse present inside Lawrence's house?

As for the performances, Lawrence and Kovai Sarla steal the show. Their comic timing is impeccable. Lakshmi Rai sizzles quite a bit. Sharat Kumar's transgender role is well-done and is almost award-winning material.

Thaman's music is l-o-u-d and a complete "mass" package, but the dances make them sound better. The visuals are pretty good, save for a few low-grade bits here and there.

In all, a movie that you can watch and not think about much later, but only if horror-comedy is your thing.
Share. Save. Connect.
Tweet
KANCHANA SNAPSHOT

ADVERTISEMENT
This page was tagged for
khanchna telugu full movie
Kanchana horror moviestelugu
movie roller telugu kanchana3 movie
kanchana 2 telugu full movie
konchana3 movi reviews in telugu
Follow @fullhyderabad
Follow fullhyd.com on
About Hyderabad
The Hyderabad Community
Improve fullhyd.com
More
Our Other Local Guides
Our other sites
© Copyright 1999-2009 LRR Technologies (Hyderabad), Pvt Ltd. All rights reserved. fullhyd, fullhyderabad, Welcome To The Neighbourhood are trademarks of LRR Technologies (Hyderabad) Pvt Ltd. The textual, graphic, audio and audiovisual material in this site is protected by copyright law. You may not copy, distribute, or use this material except as necessary for your personal, non-commercial use. Any trademarks are the properties of their respective owners. More on Hyderabad, India. Jobs in Hyderabad.