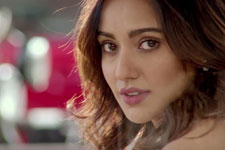 Ajay Kumar R / fullhyd.com
EDITOR RATING
4.0
Performances
Script
Music/Soundtrack
Visuals
4.0
3.0
5.0
6.0
Suggestions
Can watch again
No
Good for kids
No
Good for dates
Yes
Wait to rent it
No
Anubhav Sinha's Tum Bin (2001) had all the right ingredients needed for a romantic film in the early 2000s - good direction, a sensible story and a love triangle without much melodrama - and thus was well-received. 15 years later, Sinha recreates the movie with Amar (Aashim Gulati) and his fiancé Taran (Neha Sharma), and Shekhar (Aditya Seal). Tum Bin 2 uses a plot similar to that of its prequel, and attempts to re-work the magic.

Amar meets with an accident on a skiing trip while traversing through a restricted area somewhere in the snowy mountains of the Highlands. After several attempts by rescue officials, Amar is declared dead. Devastated by this, Taran and her dead fiance's father (Kanwaljit Singh) go back to their homes in Glasgow (Scotland) and try to move on with whatever strength they have left.

But things take a positive turn when Shekhar, a friend of Amar's father and who is as broken as the two, enters her life and offers to help her set up a business. The duo end up falling in love, and look forward to starting a life together. But Amar then comes back from the dead after being rescued by a traditional doctor who spots him paralyzed in a river near the site of the accident.

Shekhar and Taran can no longer can see each other after Amar's comeback, and are forced to remain "friends". Taran is now stuck in a love triangle between a person she has fallen in love with and a person who she loved once but has accepted as dead. What the consequences will be of her confessing her feelings for Shekhar to Amar forms the crux of the story.

Director Sinha has been having a tryst with bad movies (from Tathastu to Gulaab Gang), and Tum Bin 2 adds to the list. The first reason this one fails to work is the lack of any significant change from the original 2001 movie. The second is Shekhar's dialogues. Every speech of his reminds you of those asinine "inspirational quotes" on social media that have little to no correlation with real life or just do not work for everyone. Aditya's 60-second philosophical lectures splattered across the film are have too many phrases and too little meaning. Shekhar is no Paulo Coelho or Robin Sharma, but tries too hard.

Then, the two male characters keep giving up on their love for Taran in an endless cycle, while she just does as she pleases. This becomes agonizing after a while as it starts to look like a pointless exercise, and you desperately want the film to end. There is also a twist to the story which is the same as the one in Tum Bin. An unexpected turn of events in a movie is supposed to boggle and not irk. And the last 15 minutes are a roller-coaster of needless twists and turns, and drawn out.

Neha Sharma and Aashim Gulati look clueless throughout the movie. And while the former still emotes well in some parts as broken and melancholic, the latter (the debutante) is a child on a Ferris Wheel who looks happy for no reason other than the sheer pleasure the ride gives him. He is joyful even where he needs to look sad. Aditya Seal and Kanwaljit Singh are the better actors and perform naturally, even though the former, as mentioned before, has some really embarrassing and monotonous monologues to deliver.

Needless to say, the visuals (?Ewan Mulligan) of the Scottish Highlands are a spectacle to behold. The blue tint of the camera and the cool hues add to the gloominess the narrative requires. The music (Ankit Tiwari, Nikhil-Vinay) is forgettable, and doesn't help the movie. And an item number by Neha Kakkar (as the singer) is embarrassing with too many celebs thrown into the mix.

Reproducing Tum Bin was probably a bad idea. Anubhav Sinha needs to come up with some original, interesting and thought-provoking ideas if he wants to break the jinx.
Share. Save. Connect.
Tweet
TUM BIN 2 SNAPSHOT 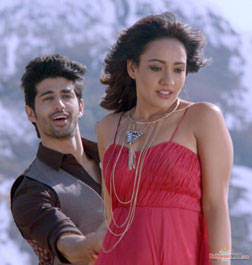 ADVERTISEMENT
This page was tagged for
tum bin 2 full movie
Tum Bin 2 hindi movie
Tum Bin 2 reviews
release date
Neha Sharma, Aditya Seal
Follow @fullhyderabad
Follow fullhyd.com on
About Hyderabad
The Hyderabad Community
Improve fullhyd.com
More
Our Other Local Guides
Our other sites
© Copyright 1999-2009 LRR Technologies (Hyderabad), Pvt Ltd. All rights reserved. fullhyd, fullhyderabad, Welcome To The Neighbourhood are trademarks of LRR Technologies (Hyderabad) Pvt Ltd. The textual, graphic, audio and audiovisual material in this site is protected by copyright law. You may not copy, distribute, or use this material except as necessary for your personal, non-commercial use. Any trademarks are the properties of their respective owners. More on Hyderabad, India. Jobs in Hyderabad.