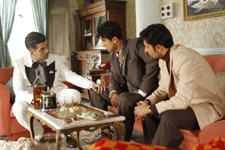 Nupur Barua / fullhyd.com
EDITOR RATING
5.0
Performances
Script
Music/Soundtrack
Visuals
7.0
4.0
6.0
7.0
Suggestions
Can watch again
No
Good for kids
No
Good for dates
Yes
Wait to rent it
Yes
Ranbir Kapoor said in a recent interview that he had made a mistake with Besharam, and that such movies that required action heroes were best left to the Khans, Akshay Kumar and Ajay Devgn. Which is why he was so careful, he said, about the movies he now picked. Anurag Kashyap, on the other hand, is desperate to become a commercial movie director, while still holding on to the "offbeat" tag. Bombay Velvet is his attempt to break into the 100-crore club, and that is no secret. Strange, then, that the actor and the director paired up for one of the most ambitious movies of this year.

Balraj (Ranbir Kapoor) is all for becoming a big shot. Growing up in the red light area of a post-independence Bombay, watching his mother being abused daily, and constant poverty - all of these have been hard on him. His only solace is his childhood friend Chiman (Satyadeep Mishra), with whom he shares his secret desires of becoming rich and famous. Then there is bare-knuckle prize fighting that he indulges in whenever he feels the need to blow off some steam.

Inspired by Hollywood gangster movies, and especially by James Cagney, Balraj tries to rob Kaizad Khambatta (Karan Johar), an affluent member of the elite and also the owner of a tabloid, but has the tables turned on him instead. Impressed by his "daring", however, Khambatta employs both Balraj and Chiman as his henchmen in his dirty deals.

Slowly, Khambatta manages, with the duo's help, to become a close associate of the Bombay mayor Romi Mehta (Siddhartha Basu) - it is the late 1960s and Khambatta wants his piece of the pie that is Bombay, a city undergoing major changes and development. Khambatta, impressed with Balraj's dedication, rechristens him Johnny Balraj, and makes him the manager of the newly-opened Bombay Velvet, a very exclusive jazz club.

This is where Johnny meets Rosie (Anushka Sharma), a jazz singer with the voice of an angel. She is from Goa, and also the mistress of Jimmy Mistry (Manish Chaudhari), a tabloid owner whose sympathies lie with the union members of the mills that are shutting down. Mistry and Khambatta, once childhood friends, are now rivals, given their opposing principles. Mistry has planted Rosie inside Bombay Velvet, so that she can provide him with information that can incriminate Khambatta and his cronies. Unfortunately for him, Rosie falls in love with Johnny.

The problems begin when Johnny demands a bigger share of Khambatta's profits. As he becomes more aggressive with his demands, and even uses a little blackmail to scare Khambatta, Johnny also realises that he is losing control of the situation. His priorities is Rosie and the life that he dreams of with her. However, he has yet to learn her secrets and the fact that she may betray him soon.

At the beginning of the film, Anurag Kashyap thanks a number of people in the credits, the foremost being Martin Scorcese. As you sit through the movie, you realise why - the entire screenplay contains inspired sequences and plot points from various Scorcese movies. From rough neighbourhoods to Tommy guns, Bombay Velvet has a familiarity that you cannot quite place, but you know you have seen the stuff before, in Hollywood movies at least. In the process, Kashyap loses track of the story. There is just too much that he crams into the 148 minutes of the movie, and although most of it is interesting, the plot is paper thin.

There are just too many important characters, to begin with. At least, that is the impression the film gives you. And then you are disappointed that most of them are either dropped like flies, or that their tracks do not reach a resolution. Then, the movie begins as the saga of a young man, and post-interval, it turns into a tale of bloody revenge. The turning point is not clear, and you do not feel the sympathy that you should for the protagonist.

The introduction of a smart police unit does nothing for the story, and the failed attempts, of both the criminals and the cops, leave you frustrated and confused. The director offers you just one sequence of events after another, with no clear connection between them, leading to a rather unsatisfactory climax and an equally inadequate denouement. At the heart of it, Bombay Velvet is a love story, but that is made clear only at the end.

Anurag Kashyap revels in clichés in this film, and since it is a deliberate move, they do not grate on your nerves. However, he omits hard-hitting dialogues and humour. The lack of intensity in the movie is a rude surprise for Kashyap fans, and even the little twist in the drama at the end cannot make up for that.

Visually, however, Bombay Velvet is a dream. The film is shot in Sri Lanka, and the recreation of the city is believable, and the slightest attention you may pay to detail is enough to distract you from the disaster that the screenplay is about to become as the movie progresses. The production design is near-perfect, especially for the interiors of the hotels, apartments and nightclubs, but it is the costumes and the styling that really grab your attention. Designer Niharika Bhasin Khan used all the references she could get her hands on, including photographs of her mother-in-law Begum Para, to usher in the world of South Bombay in the 1960s.

The camera work is sublime in parts, and it takes advantage of the production design to transport you back to the era that the story is set in. Some of the prize-fighting shots are superbly executed. The much-hyped Tommy gun sequence is however a little over the top, given that it achieves nothing in the story except the death of a few insignificant goons.

Amit Trivedi's music is decent, but not the best he has done. The songs begin to sound similar after a point. You cannot find fault with the editing, but it is a rather lengthy movie with irrelevant plots thrown in - a prerogative of the director, not the editor.

Ranbir Kapoor is, as always, sincere in his portrayal of Johnny Balraj. He does not have much to do, however, except scowl his way through the film. It does seem like he tries to bring some humour to his character, but there is only so much that you can do with a script that forgot the laughs. Mention needs to be made of the child actor playing the young Balraj - his resemblance to Ranbir Kapoor is uncanny.

Anushka Sharma plays Rosie pretty well, but this is not a role that she can play with conviction. Again, she does not have much to do, and her dialogues begin much later in the movie. The scenes in which she has to sing are her best, but her character yo-yos too many times, between damsel in distress and strong independent woman, for you to get a grip on what Rosie is really all about.

The opening credits announce the introduction of Karan Johar as an actor, and that is not strictly true (remember Dilwale Dulhania Le Jayenge?). Johar, again, is sincere and impressive, but you cannot help thinking that he tries too hard to be suave and cold.

Manish Chaudhari, though, is a delight. He always is, but his role is cut short towards the end. Siddhartha Basu is competent as the corrupt mayor, and Kay Kay Menon deserved more screen space. Satyadeep Mishra creates an impact, even though the importance of his character is reduced in the second half. Vivaan Shah's role is not very clear, but he is fun to watch, especially since he sports a moustache.

Bombay Velvet is not Anurag Kashyap's best. He appears to have gotten carried away by the grandeur of his own project, and forgotten to concentrate on the most important aspect of the movie - a credible storyline. Watch this one if you are curious, but be prepared for some impatience. We advise you to wait for the DVD release.
Share. Save. Connect.
Tweet
BOMBAY VELVET SNAPSHOT 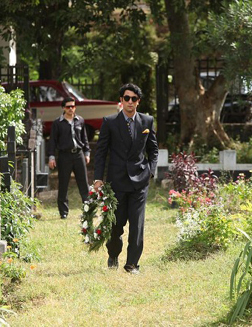 ADVERTISEMENT
This page was tagged for
Bombay Velvet hindi movie
Bombay Velvet reviews
release date
Ranbir Kapoor, Anushka Sharma
theatres list
Follow @fullhyderabad
Follow fullhyd.com on
About Hyderabad
The Hyderabad Community
Improve fullhyd.com
More
Our Other Local Guides
Our other sites
© Copyright 1999-2009 LRR Technologies (Hyderabad), Pvt Ltd. All rights reserved. fullhyd, fullhyderabad, Welcome To The Neighbourhood are trademarks of LRR Technologies (Hyderabad) Pvt Ltd. The textual, graphic, audio and audiovisual material in this site is protected by copyright law. You may not copy, distribute, or use this material except as necessary for your personal, non-commercial use. Any trademarks are the properties of their respective owners. More on Hyderabad, India. Jobs in Hyderabad.