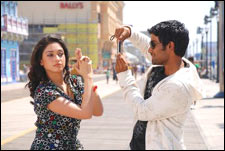 Deepa Garimella / fullhyd.com
EDITOR RATING
3.0
Performances
Script
Music/Soundtrack
Visuals
5.0
3.0
6.0
6.0
Suggestions
Can watch again
No
Good for kids
No
Good for dates
No
Wait for OTT
No
Ananda Thandavam, the posters claim, is a wholesome, entertaining, feel-good, pleasant, musical love story. It begins with a look at Raghu (Rishabh) and Madhumita (Tamanna). Raghu is the son of a respected engineer at a town, and is just out of college. Madhumita is the mischievous, cutesy daughter of the Chief Engineer of the town, and is just out of the zoo.

She's the kind who revels in the joy of life. Metaphorically speaking, honeybees won't stop her from getting all the honey she wants from their hive. Realistically speaking, she will get someone to poke the hive for her. Her cheerful daily exploits mostly include repeatedly mutilating their yoga teacher's posterior using bombs, chilli powder mixed with water, etc. In short, she's a 20-something girl with the spirit of a 6-year old, and the brains of a 2-month old. Aren't you feeling good about this film already? Don't lie.

Anyway, Madhumita's parents tell her to fall for Raghu. And he too falls for her. Because of her childlike, innocent, charming acts. Honest. And if you thought he fell for her because she once unwittingly lifts up her skirt to show a bruise on her thigh, or because she carelessly mentions the word "underwear" in a phone conversation, then you're acting perfectly normal.

Raghu and Madhu exchange rings, and it is agreed that they will get married within a month. However, her parents suddenly dump the alliance, and get her to exchange rings with an evil NRI. They cite excuses about his dad's "keep", and how the new guy is better than Raghu.

Raghu is both heart-broken and ashamed. He's also drunk and puking all over the place. Some people in the audience were deeply affected by this, and strongly felt that Ananda Thandavam should be given a separate state, with its own CM, Home Ministry and floor cleaner.

Next, Raghu jumps into a waterfall, and knocks his head on an underwater boulder, setting off splashes of red enough to colour the Niagara Falls. After being pulled out, he is told he must get his life into his own hands.

He goes to the US to study, where he initially feels threatened by all the horrible vices around him - muggers, shoot-outs at school, and naked women at bars. Later, he bumps into the worst of them all - his married ex-flame, who has not grown up one bit. He must also tackle the NRI pressure to get hitched to Ratna (Rukmini), who falls in love with him. Finally, things unfold to a very sorry ending.

This film probably aimed to tell teenagers to grow up before falling in love, and even seems like a bunch of everyday incidents was strung together to tell a story. However, the sombre proceedings put off more than they can preach. The characters don't connect with you, either. The first half has Madhumita too air-headed to be tolerated, and Raghu suffering too much for you to handle, making it painful.

The second half starts out feeling saner, with Raghu's second chance at life, and just when things are easing out, the director throws in things to make you uncomfortable all over again. For example, the fact that Madhumita unflinchingly starts cavorting with Raghu in the US, after (a) the bitter past they've had and, (b) her marriage, makes you wonder if you've even got the story right.

Tamanna is getting repetitive, and is the least tolerable character in the movie. Rishabh is good, and Rukmini is like a breath of fresh air in this dank offering. The music is unconventional, but nothing that you'd want to hear again. Some of the songs are well-picturised, though.

On the whole, this is the kind of film that serves as a hard-hitting reminder that here are 3 hours of your life that will never, ever come back.
Share. Save. Connect.
Tweet
ANANDA THANDAVAM SNAPSHOT

ADVERTISEMENT
This page was tagged for
Ananda Thandavam telugu movie
Ananda Thandavam reviews
release date
Rishabh, Tamanna
theatres list
Follow @fullhyderabad
Follow fullhyd.com on
About Hyderabad
The Hyderabad Community
Improve fullhyd.com
More
Our Other Local Guides
Our other sites
© Copyright 1999-2009 LRR Technologies (Hyderabad), Pvt Ltd. All rights reserved. fullhyd, fullhyderabad, Welcome To The Neighbourhood are trademarks of LRR Technologies (Hyderabad) Pvt Ltd. The textual, graphic, audio and audiovisual material in this site is protected by copyright law. You may not copy, distribute, or use this material except as necessary for your personal, non-commercial use. Any trademarks are the properties of their respective owners. More on Hyderabad, India. Jobs in Hyderabad.