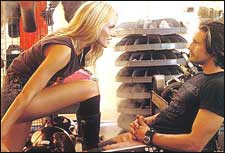 Charisma Murari / fullhyd.com
EDITOR RATING
5.0
Performances
Script
Music/Soundtrack
Visuals
NA
NA
NA
NA
Suggestions
Can watch again
NA
Good for kids
NA
Good for dates
NA
Wait for OTT
NA
One infantile egomaniac spells trouble. Combine about fifty of them and you get - a B-I-K-E-R movie! Yes, with the caps key on and all! There's HummVs and Harleys, fast cars and faster bikes, big explosions and bigger egos: in short, absolute m-a-y-h-e-m. And it's called a "Matrix" hangover. Clearly, Warner Brothers and Village Roadshow Pictures are still reeling under the Matrix-morning-after, but we will get into that later.

Ford (Martin Henderson) is a smooth-talking, bike-riding (but of course), blue-eyed, cute-dimpled pretty boy who can kick some serious butt. Yeah! You can watch it yet! And after you reduce your IQ by a factor of 10, you might even enjoy it. With Ford are two of his cronies, and a gal, Shane (Monet Mazur), who has a bit of a history with him.

Also giving Ford a history lesson, albeit of a different kind, is Henry James (Matt Schulze), whom the former had swindled out of drugs and a bike that is too good to be true. And that, we suspect, is why it feels so unreal. Anyway, this takes James on a vendetta trail, meaning conspiracies and bike chases.

It is some of the bike chases that compel you to ask if they were incorporated here because there wasn't any room in the Matrix movies. Really, they've biked over trains - and heck, even inside them! There is a freeway sequence (in keeping with the unwritten rule applicable to all movies of the action genre), which ends with a Hummer landing right smack atop a sports car! And don't even get us started on the 'Street Hawk' stunts they tried to pull during the climax.

As for the conspiracies, well, you don't have to be a rocket scientist to see right through them, although something about FBI agent McPherson (Adam Scott) towards the end maybe called something of a twist. The entire conspiracy torques around James getting Junior (Fredo Starr) killed and framing Ford for the crime. Now Junior is junior because he has a big dude brother Trey (Ice Cube), who leads the Reaper gang. So basically, trouble for Ford.

But Ford has a nose for trouble. He smells it, and then rides straight into it. Yes, he isn't very bright, because if he were he wouldn't have needed Shane to fetch him after every encounter with the baddies. Really, it makes you wonder how he got past puberty without her.

Don't let the name of the movie fool you into thinking it is a lesson in Physics. If anything, this flick shakes your belief in science. The stunts are gravity-defying, the sustained supersonic motion throws the theory of relativity out the window - and, while on the subject of science, there is no chemistry between Henderson and Mazur.

But the movie is 81 minutes of mindless entertainment. If you are in the mood for a no-brainer, this comes recommended. Very highly.
Share. Save. Connect.
Tweet
TORQUE SNAPSHOT

See Torque full details
TORQUE USER REVIEWS
1 - 3 OF 3 COMMENTS
POSITIVE  |  NEGATIVE |  NEWEST  |  OLDEST  |  MOST HELPFUL  |  LEAST HELPFUL
USER RATING
2.0
3 USERS
Performances
Script
Music/Soundtrack
Visuals
NA
NA
NA
NA
Can watch again - NA
Good for kids - NA
Good for dates - NA
Wait for OTT - NA
Shanti Rao on 30th Apr 2004, 9:54am | Permalink
...i guess there is a CHARISHMA over here who's trying to talk about the puberty of people and MYSELF WHAT whos trying to be abusive....and there is AGONYS REQUIEM who talks about maturity of people without even having a look at them....i guess people are more concerned about puberty than the film...... anywayz being different...my rating says it all!
RATING
2
Myself What on 29th Apr 2004, 11:06pm | Permalink
i guess since all the monkey craps out here have given a so called rating it would be only fair to say that i would prefer not to rate cause it would only mean that i would to give a rating which would only be a step more abusing which i dont want to
RATING
2
Agonys Requiem on 21st Apr 2004, 10:16pm | Permalink
So what now.... children are reviewing the movies for fullhyd??? c'mon people you are really good at this.... where are the grown ups, the crtics.. the popcorn.....
RATING
2
LEAVE A COMMENT
fullhyd.com has 700,000+ monthly visits. Tell Hyderabad what you feel about Torque!
MORE MOVIES
Latest Reviews
Ponniyin Selvan - 1
Naane Varuvean
Nene Vasthunna
Krishna Vrinda Vihari
Saakini Daakini
more
Where the Crawdads Sing
Everything Everywhere All At...
Aa Ammayi Gurinchi Meeku Che...
Brahmastra: Part One - Shiva
Oke Oka Jeevitham
Brahmastra: Part One - Shiva
Ranga Ranga Vaibhavanga
First Day, First Show
Dragon Ball Super: Super Her...
Liger
Contemporary Reviews
Rudraksh
Kaasi
Seenu Vasanthi Laxmi
Tiger Harishchandra Prasad
Vaalliddaru
more
Donga Dongadi
Muskaan
Princess Diaries 2
Something's Gotta Give
Paycheck
Hidalgo
Cold Mountain
Yeh Lamhe Judaai Ke
Miss India
Random Reviews
Ninnu Choosaaka
Nuvvu Nenu
Fahrenheit 9/11
The Prestige
Hari Puttar
more
Saleem
KSD (Katha Screenplay Darsak...
Haywire
Jack The Giant Slayer (Hindi...
Miss Lovely
Lingaa
Run (2016)
Kingsman: The Golden Circle ...
Shazam! (Hindi)
Beast (Telugu)
SEARCH MOVIES
Dissatisfied with the results? Report a problem or error, or add a listing.
ADVERTISEMENT
SHOUTBOX!
{{todo.name}}
{{todo.date}}
[
ip{{todo.ip}}
]
{{ todo.summary }}... expand »
{{ todo.text }} « collapse
First  |  Prev  |   1   2  3  {{current_page-1}}  {{current_page}}  {{current_page+1}}  {{last_page-2}}  {{last_page-1}}  {{last_page}}   |  Next  |  Last
{{todos[0].name}}

ADVERTISEMENT
This page was tagged for
Torque english movie
Torque reviews
release date
Ice Cube, Martin Henderson
theatres list
Follow @fullhyderabad
Follow fullhyd.com on
About Hyderabad
The Hyderabad Community
Improve fullhyd.com
More
Our Other Local Guides
Our other sites
© Copyright 1999-2009 LRR Technologies (Hyderabad), Pvt Ltd. All rights reserved. fullhyd, fullhyderabad, Welcome To The Neighbourhood are trademarks of LRR Technologies (Hyderabad) Pvt Ltd. The textual, graphic, audio and audiovisual material in this site is protected by copyright law. You may not copy, distribute, or use this material except as necessary for your personal, non-commercial use. Any trademarks are the properties of their respective owners. More on Hyderabad, India. Jobs in Hyderabad.