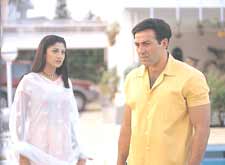 Smriti Kashyap / fullhyd.com
EDITOR RATING
5.0
Performances
Script
Music/Soundtrack
Visuals
NA
NA
NA
NA
Suggestions
Can watch again
NA
Good for kids
NA
Good for dates
NA
Wait for OTT
NA
Clench-unclench fist, stare angrily at camera, then stare angrily into space. And when the rubber meets the road, it's just Bam Bam Biff Biff Kaboom Boom Boom. That's about how the script of 'Indian' reads. Hey, don't look away already, it still isn't as bad as that sounds. There are some pretty mean tricks here and there that promise you the action you have been thirsting to see. So welcome to 'Die Hard With A Vengeance With Sunny' (and lets blow up some trucks while we're at it).

Looks like Sunny Deol's truck license was revoked, and so here we see him as an honest cop, Rajsekhar Azad. He holds the post of Commissioner Of Police at an age where most men are swapping shots of vodka and tequila at swanky pubs. He also suffers from a debilitating disease called 'Desh Bhakti-itis' (DB) that causes him, as mentioned earlier, to stare vacantly into open spaces and clench and unclench his fist at alarming regularity, not to mention infect him with a weird habit of throwing on his goggles whilst leaving dank, decrepit prison cells.

One day, during a fit of DB, he captures a rat called Wasim Khan who by the looks of it is a dangerous criminal. This guy, at the behest of Azad, is kept in a separate cell so that Azad can keep an eye on him and stop his criminal insanity. The cell is supposed to be the Fort Knox of Bandra, but this guy still manages to plot and scheme some attacks that leave Azad baying for his blood.

A couple of twists later, Azad kills a corrupt DGP. Now comes a huge pretzel twist - the DGP is none other than Shilpa 'rhinoplasty' Shetty's Pop. And this female is none other than Mrs. Azad (whoopsy daisy!). A couple more twists later we have Danny Denzongpa coming into action as the head honcho of all these terrorist guys. Azad tries to put them all behind bars, but it's easier said than done. And this is the main plot of Indian.

If you ask me whether I paid any attention to the film at all, then I confess sheepishly, this is one film that I actually enjoyed. It's got the same corny situation of cops and robbers, but a couple of novel scenes hold your attention.

Sunny Deol needn't bother to act; the script steals the show. Shilpa has nothing to do but look like she's married. There are not too many songs infecting the film, so you can quit hassling. Sunny's arms are all over the screen, and thankfully he doesn't have too many banshee-inspired dialogues, so you can take out that fluff of cotton from out of your ears.

If Indian is showing very close to your place, then perhaps you can go and watch it - it certainly entertains you. But if the theater is like outside a 5km radius, you'd have to be like really bored. But then again, it beats watching any other film released this weekend. This film has enough pop, snap and crackle to fill your bowl of matinee mirth.
Share. Save. Connect.
Tweet
INDIAN SNAPSHOT

ADVERTISEMENT
This page was tagged for
Indian hindi movie
Indian reviews
release date
Sunny Deol, Shilpa Shetty
theatres list
Follow @fullhyderabad
Follow fullhyd.com on
About Hyderabad
The Hyderabad Community
Improve fullhyd.com
More
Our Other Local Guides
Our other sites
© Copyright 1999-2009 LRR Technologies (Hyderabad), Pvt Ltd. All rights reserved. fullhyd, fullhyderabad, Welcome To The Neighbourhood are trademarks of LRR Technologies (Hyderabad) Pvt Ltd. The textual, graphic, audio and audiovisual material in this site is protected by copyright law. You may not copy, distribute, or use this material except as necessary for your personal, non-commercial use. Any trademarks are the properties of their respective owners. More on Hyderabad, India. Jobs in Hyderabad.