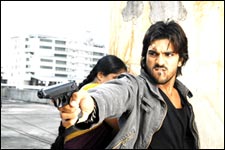 EDITOR RATING
5.0
Performances
Script
Music/Soundtrack
Visuals
NA
NA
NA
NA
Suggestions
Can watch again
NA
Good for kids
NA
Good for dates
NA
Wait for OTT
NA
A good question to analyze Chirutha is, if it cast an unknown newcomer with the same acting talent and screen presence as Ram Charan, would it have worked.

A better question is, does Chirutha work.

It's not to Ram Charan's discredit, however (did you forget, this movie is about him). He gives the movie more or less what it needs. The one who doesn't is Puri Jagannath.

Indeed, screenplay-god Jagannath fumbles in his core competence - you actually get bored in the second half. Things do not seem to flow logically, the comedy is just short of non-existent (with Venu Madhav, Ali, Brahmanandam, M S Narayana and Dharmavarapu in the cast, that's actually a feat), there's no soul in the romance, the dialogues - a Jagannath Chef Special - impress more as aberrations here and there, and there is no uniform, forget powerful, theme propelling the unraveling.

Did we miss anything?

On the flip side, they never once refer to Charan's dad or family. That's incredible display of dignity by normal Tollywood standards.

Charan (Ram Charan) spends his entire childhood in jail since he owns up to a crime he did not commit, for money that he needs to get his mother operated upon, after a criminal, Mattu Bhai (Ashish Vidyarthi), murders his father and grievously injures her. When he's released, he moves to Bangkok as a tourist guide there.

He falls in love with Sanjana (Neha), the ultra-snooty daughter of the ultra-rich Karthikeya (Prakash Raj), and accompanies her and her posse of friends on their tour of Bangkok, as a guide. The romance occupies 75% of the film, and destroys it.

The character of Sanjana is etched out too harshly, and stays that way too long, for the audience to warm up to her and take ownership. There's no intelligent courtship between two smart people that engrosses you - this is a 1980s formula that's botched up to make it even worse.

Indeed, Sanjana turns over a new leaf and falls in love with Charan in one extremely unconvincing short scene (actually, there's no scene at all). In fact, a whole chunk where the couple get marooned on an island seems like a disjoint, and takes the romance way over the scheduled time.

Plus, all the inconsistencies. Why does Charan make like he is about to rape her? Why does he confess love to her, when he says earlier to a friend that her arrogance has killed all the love he had for her? How does a 20-year-old girl as spoilt and arrogant as Sanjana change with just a 2-minute speech from Charan? Why (and when, and how) does she fall in love with him? And why does Sanjana's reasoning and loving father, never portrayed as a villian, order Charan killed when she professes love for him?

Yes, the screenplay has issues. Luckily for Puri Jagan, Neha Sharma is okay with being skimpily clad all through.

Then the movie completely changes tack, with the revenge drama suddenly kicking in. To cover it up, Charan mutters something about how he's been at it all through.

Ram Charan turns in a dignified, if not high-octane or energetic, performance - he has a good voice and frame, and has perfected some dance moves. Neha does well in the scope that a poorly written character can afford. And Prakash Raj gets to mouth some good lines. Ali's character however is meaningless, and painful to tolerate. In fact, the entire comedy track has no life in it, with you smiling more because of who is saying something rather than what he is saying.

There are no great tracks on the musical score that you will still be hearing this time next year, though they don't put you off. And Bangkok offers no visual extravaganzas. Kulu Manali was better.

The BO fate might be the same - Desamuduru, despite not too many people thinking it was a great product, worked well due to lack of competition. The month after Chirutha's release however sees Mahesh and Venkatesh, top A-listers, hitting the box office. And Shah Rukh Khan and Sanjay Leela Bhansali. Also, all of Puri Jagan's movies so far have also been helped by either big or energetic/hyperactive stars. This one casts a sober debutant.

Chirutha might work for you if you go in to have a good time, and have not read any reviews.
Share. Save. Connect.
Tweet
CHIRUTHA SNAPSHOT

See Chirutha full details
CHIRUTHA USER REVIEWS
1 - 15 OF 35 COMMENTS  |  NEXT  |  LAST
POSITIVE  |  NEGATIVE |  NEWEST  |  OLDEST  |  MOST HELPFUL  |  LEAST HELPFUL
USER RATING
6.0
465 USERS
Performances
Script
Music/Soundtrack
Visuals
1.0
1.0
1.0
1.0
Can watch again - NA
Good for kids - NA
Good for dates - NA
Wait for OTT - NA
Ranaa on 7th Dec 2007, 8:45pm | Permalink
Yes the story is not set well. The expectations were very high for a new comer Ram Charan and he did stand up to that! showed us his talent!!!
But the director on the other hand did not. Now he is a good director but this I did not see coming. Which shows he can not prove himself when he is given a luck charm as the one and only Ram charan. So stupid of him to make such a fool of him self... Hope Charan has better luck in his next film, Hope over mega star can give better advice to his son. Best of luck to Ram charan's future!!!!
RATING
6
Nany Kiran on 14th Nov 2007, 1:59pm | Permalink
good butnot so,good I think he come near to his fater he nead some more qualits in his father
RATING
2
Screw Telugu Film Industry on 31st Oct 2007, 12:39am | Permalink
movie is crap.puri dint work hard.songs are ok.charan has a great screen presence,good dialogue delivery he will go a long way!!next ruler of tollywood
RATING
2
Prasadcvk on 18th Oct 2007, 11:09pm | Permalink
Ram charan seems to be a very good actor with loads of talent.. Its unfortunate that the story was so ordinary..Which has overshadowed his talent.. Hope rajamouli comes to his rescue in his second movie
RATING
4
Kk on 12th Oct 2007, 4:27pm | Permalink
puri is far better than this.chiru ni mind lo pettukoni movie teesinatlu unnadu.anduke dobbindi
RATING
4
Greg Peck on 11th Oct 2007, 9:58am | Permalink
Charan is faaaaaaaar better than Chiranjeevi. He has a bright future.
RATING
4
Bramhi -software Engineer on 9th Oct 2007, 4:24pm | Permalink
Heroine ki dubbing cheppina danini champaali..Aali ki intha chandalamaina role icchina vadini champali..story raasina neech kamin kutthey gadini champaali..bramhanandam ki intha panikimalina role icchina vadini champali..ee cinema bagundi annavadini champali.. yeess..champaali.aaa
RATING
4
Raaj on 6th Oct 2007, 9:50pm | Permalink
I enjoyed the songs , Charan's dance and puri's screen play.

Story was routine, but ok, paisa vasul.
Actually when compared to most fo the debutants Charan was good.

ADVERTISEMENT
This page was tagged for
telugu chirutha movie story
Chirutha Theme Unknown
Chirutha telugu movie
Chirutha reviews
release date
Follow @fullhyderabad
Follow fullhyd.com on
About Hyderabad
The Hyderabad Community
Improve fullhyd.com
More
Our Other Local Guides
Our other sites
© Copyright 1999-2009 LRR Technologies (Hyderabad), Pvt Ltd. All rights reserved. fullhyd, fullhyderabad, Welcome To The Neighbourhood are trademarks of LRR Technologies (Hyderabad) Pvt Ltd. The textual, graphic, audio and audiovisual material in this site is protected by copyright law. You may not copy, distribute, or use this material except as necessary for your personal, non-commercial use. Any trademarks are the properties of their respective owners. More on Hyderabad, India. Jobs in Hyderabad.