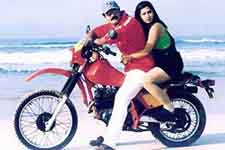 Prashanth Varma / fullhyd.com
EDITOR RATING
1.0
Performances
Script
Music/Soundtrack
Visuals
NA
NA
NA
NA
Suggestions
Can watch again
NA
Good for kids
NA
Good for dates
NA
Wait for OTT
NA
Dasari is a director caught in a time warp. In a scenario where it is acknowledgedly difficult to make commercial hits of radically new scripts, the big challenge for Indian filmmakers is entertaining people for 2-1/2 hours with the same storylines. The game is all therefore in the creativity and the presentation.

And in this kind of a scenario, Dasari insists on continuing with approaches that have long outlived their appeal. Blatant displays of emotions and harangues on decaying societal morals by talkative lead characters don't make hit movies. Subtlety and slickness are the key factors. And they unfortunately appear to be aliens to the Chinna team.

Chinna (Dasari Arun) is a jobless graduate who goes around protecting the law and who follows in the footsteps of his father, Ramachandra (Dasari Narayan Rao), who in turn takes inspiration from Harischandra, the archetypal truth-bearer. Ramachandra is a bus-driver, and in a display of quintessential Dasari senti, exhibits loud and exaggerated love for his bus throughout his role. He has even apparently received several awards for being such a dedicated bus-driver.

Mini (Akanksha), who belongs to a family of notorious politicians, falls head-over-heels in love with Chinna, a feeling fully reciprocated. When Ramachandra tells Appa Rao (Kota Srinivas Rao), Mini's father, that his son had set fire to his (Ramachandra's) bus in front of the press, Appa Rao is left with no choice but to send his son to jail, to keep up his reputation. He gets his son out of there, however, by bribing a few officials to declare that Ramachandra is mentally ill. Ramachandra's death ensues, and when the collector tells Chinna that he is helpless, he decides to take the law into his own hands.

Chinna is a film that keeps swinging between extremes. You get to see either actors who overact or those who do not act at all, either emotional dialogues or boring comedy, and either 'Matrixian' fights and ultra Western outfits or lectures about national property. The director isn't clear himself whether this is a love story or a questioning of the current social scene.

The movie has a whole lot of unwarranted scenes that promise a twist in the story but end up nowhere. The pair of stuttering comedians trying to bring life into the movie gives comedy a dimension you never wanted to know existed. The protagonist's expressions are twice as bad as his dialogue delivery, which mounts your blood pressure slowly. And his parrot-like repetition of the word "Hello!" gives you the creeps. Though Arun carries himself with aplomb through the dance and fight sequences, his acting leaves much to be desired. Ditto for the heroine Akanksha as well, who isn't particularly captivating.

Fortunately, Dasari Sr's dialogues were drowned in the hooting that the fistful of audience indulged in. You might not be as lucky, so take the safe way out. There are lots of other things to do.
Share. Save. Connect.
Tweet
CHINNA SNAPSHOT

ADVERTISEMENT
This page was tagged for
Chinna telugu movie
Chinna Telugu movie download
Chinna Telugu film
Chinna telugu movie
Chinna reviews
Follow @fullhyderabad
Follow fullhyd.com on
About Hyderabad
The Hyderabad Community
Improve fullhyd.com
More
Our Other Local Guides
Our other sites
© Copyright 1999-2009 LRR Technologies (Hyderabad), Pvt Ltd. All rights reserved. fullhyd, fullhyderabad, Welcome To The Neighbourhood are trademarks of LRR Technologies (Hyderabad) Pvt Ltd. The textual, graphic, audio and audiovisual material in this site is protected by copyright law. You may not copy, distribute, or use this material except as necessary for your personal, non-commercial use. Any trademarks are the properties of their respective owners. More on Hyderabad, India. Jobs in Hyderabad.