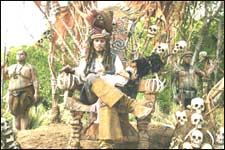 Samrat Sharma / fullhyd.com
EDITOR RATING
7.0
Performances
Script
Music/Soundtrack
Visuals
NA
NA
NA
NA
Suggestions
Can watch again
NA
Good for kids
NA
Good for dates
NA
Wait for OTT
NA
Pirates Of The Caribbean: Curse of the Black Pearl was one of the universe's big mysteries. A film made out of the premise from a theme park ride, it was surprisingly good. Johnny Depp's cracking performance was one of his most memorable, and the film was fun ride from beginning to the end.

Three years on, and Disney's sequel, Maya Dweepam (Pirates Of The Caribbean): Dead Man's Chest, is the most awaited action blockbuster this summer. And it comes ready with the goods: Depp is back for one, Bill Nighy is an invertebrate-face badass, and the action set pieces are bursting at the seams. All this, and a damn Kraken.

Despite the amazing raw material, the film did not awaken the swashbuckler in me this time, mostly because it falls prey to the same mistake that we have recently seen in Superman Returns and King Kong – hubris. This is a darker film than the first, to be sure, but it also winds and digresses and plods on and on, trying to fulfill every plot machination that Jerry Bruckheimer, director Gore Verbinski and the screen-writing duo of Ted Elliott and Terry Rossio could dream up of. And at two-and-a-half hours, this is one long scurvy scalawag.

There are entire set pieces lasting up to a half-hour without any impact on the story or the characters. Every single character from the first film is written into this one. The over-plotted Matrix sequels have nothing on this film – hell, even the dog with the keys is back! I can understand the need to recreate the charm of the first film, but were the filmmakers that unsure of the leading trio that they had bring back almost all of the first team?

Having said that, it is still a deadly entertaining film, albeit a bit long. As long as you're not trying too hard to follow the plot, the movie delivers in punches. The tale starts with Elizabeth Swann (Keira Knightley) and her beau, Will Turner (Orlando Bloom), in trouble for helping the notorious pirate and all-round scallawag, Jack Sparrow (Johnny Depp).

Will has to search for the fey buccaneer to save his beloved, who, meanwhile, is having troubles of his own. Sparrow is apparently in the debt of Davey Jones, and it is time to pay up. If he doesn't do that, Jones will send his servant, the Kraken, to do the, erm, debt-collecting.

This is a very simple version of the construct, by the way. The way the film is mounted, it just confuses the hell out of you, until you start figuring things out for yourself. The only thing helping you is some masterful acting by the main cast, with a perceived vigor and confidence that really helps propel the action along.

Johnny Depp is still the star, and gets the best lines to speak. Bloom and Knightley's performances as buccaneers are exemplary, but as their romance starts to unravel on screen, again, you can't help but feel tired. Nighy has brought his presence to the CGI-created Davey Jones, and that, you will find out, is some presence indeed.

The clean cut acting of the cast serves one purpose alone, and that is to introduce newer premises for the flash bang imagery that you've gone into the cinema hall to watch. Verbinski is like a loose cannon on the action sequences. He just plows forward with a clean and energetic style that manages to make the action feel well-paced and spectacular, yet makes the film feel like sheer force of cinema that will overwhelm you. And isn't that why we watch cinema? To feel and think, sure. But also to see a spectacle, and that is where the film delivers.

Now that I have shredded the pace and length of the film, let me state that I loved its third act without restriction. And before that, anything featuring the Kraken, or Depp and Nighy. Though the Scalawag Of The Year award still goes to Depp, Nighy's performance manages to create a bad guy who is scarier and more confident in his mastery of the sea than the one of the previous installment.

This is a film that tries hard to beat its predecessor, and almost does, but the overburdened plot and and the long, plodding pace make it fall short of the high watermark set by the first. You will probably remember the action longer than you will the plot. God help you, because a third is due next year. *Wink*.
Share. Save. Connect.
Tweet
MAYA DWEEPAM - DEAD... SNAPSHOT
MAYA DWEEPAM - DEAD MAN'S CHEST SNAPSHOT

If commercially this is 3 then what is 5 star ?? The whole Star Wars franchise put together may be. :)

If a movie is already a hit its easy for you to just check its collections and put the star. Why bother about what you liked n didnt.Your ed says you just forcast potential of movies at box office.

With all due respect - S

ADVERTISEMENT
This page was tagged for
mayadweeam
maya dweepam
Pairets of the Caribbean dead man chest telugu movies
pirates of the caribbean dead man chesthindi movie rdxmovies
mayadeepamsmovis
Follow @fullhyderabad
Follow fullhyd.com on
About Hyderabad
The Hyderabad Community
Improve fullhyd.com
More
Our Other Local Guides
Our other sites
© Copyright 1999-2009 LRR Technologies (Hyderabad), Pvt Ltd. All rights reserved. fullhyd, fullhyderabad, Welcome To The Neighbourhood are trademarks of LRR Technologies (Hyderabad) Pvt Ltd. The textual, graphic, audio and audiovisual material in this site is protected by copyright law. You may not copy, distribute, or use this material except as necessary for your personal, non-commercial use. Any trademarks are the properties of their respective owners. More on Hyderabad, India. Jobs in Hyderabad.