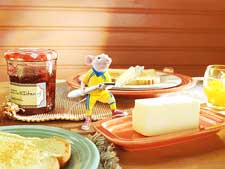 It took 150 animators and digital artists over 3 years to complete the sequel to Stuart Little. It shows - Stuart Little 2 looks fantastic. This Stuart Little may still have little in common with the E B White book that inspired its creation, save a few characters' names, but it's a family flick that's truly worth the price of admission for everyone, no matter what the source of the story.

The film is a simple yarn about friendship and family, and has its share of warm-hearted moments, light adventure, obvious humor (jokes kids will get) and subtle comedy (jokes kids won't get but their parents will). Like part one, the film is set in New York City, and everyone is nice to each other (yes, that's hard to believe, because the air in the real NYC smells like someone has been frying goats in it, and the people generally act like that is your fault). 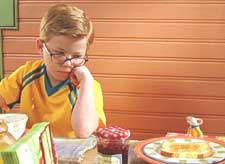 The movie essentially deals with what happens when the older child outgrows the younger one and starts spending more time with his school friends. This is a theme that many children, and more than a few adults, will be able to relate to: the point at which the younger brother or sister is a pest and not a playmate.

Freed from the constraints of having to introduce everyone, the screenplay goes off in more interesting directions. It's two years on, and Stuart (again perfectly voiced by Michael J Fox) is feeling down. He's feeling left out from brother George's (Lipnicki) life, his mother (Davis) is being overprotective, and new baby Martha is getting all the attention. An ideal time, then, for romance to enter his life.

Sure enough, one day while Stuart is on the way home from school, a new friend falls from the sky and into his car. She is a bird, her name is Margalo (voiced by Melanie Griffith) and Stuart finally has someone to relate to. She's soon kidnapped by a

villainous falcon (Woods), though, forcing Stuart to mount a rescue bid, with the perpetually flummoxed family cat Snowbell (Lane) along for the ride. 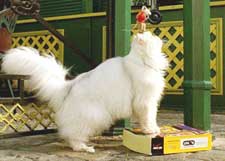 Michael J Fox picks up where he left off providing the voice of the lead character. Nathan Lane returns as the scene-stealing Snowball, the Littles' disgruntled cat, easily the life of the movie. Melanie Griffith comfortably settles into her vocal role after a shrill start. The only shame is the limited screen time given to Nathan Lane's one-liner-stocked Snowball and Steve Zahn's Monty (meriting a mere cameo). Expertly done special effects will have kids thinking Stuart and Margalo are real, and it is evident that a great deal of thought and no little expertise went into the animation.

Throughout the movie, children are encouraged to fill their lives with adventures. And to always look for the silver lining when those adventures don't turn out the way they are supposed to. The great thing about Stuart Little is that it can transport the most jaded adults and let them see things through the trusting eyes of a child again. And that is a profoundly precious gift to bestow on anyone.

The ending of the movie is affirmative of the two most important things in life: family and friends. But what comes at the end will make you long for more of what you saw in the beginning. Regardless, this one is a must see.
Share. Save. Connect.
Tweet
STUART LITTLE 2 SNAPSHOT
See Stuart Little 2 full details
STUART LITTLE 2 USER REVIEWS
1 - 1 OF 1 COMMENTS
POSITIVE  |  NEGATIVE |  NEWEST  |  OLDEST  |  MOST HELPFUL  |  LEAST HELPFUL
USER RATING
7.7
15 USERS
Performances
Script
Music/Soundtrack
Visuals
NA
NA
NA
NA
Can watch again - NA
Good for kids - NA
Good for dates - NA
Wait for OTT - NA
Pranjal Gupta on 4th Nov 2002, 12:51pm | Permalink
Stuart Little 2 is a story of a little mouse who goes through dangerous adventures e. g. the hands of a falcon, a fall from the Empire State building, gone by a garbage barge, flying an aeroplane, going into a sink hole etc. His adventures are cool!! I think everybody should see it - I liked it. It has a very funny ending. The moral is: You are as big as you think you are.

ADVERTISEMENT
This page was tagged for
Stuart Little 2 english movie
Stuart Little 2 reviews
release date
Michael J. Fox, Geena Davis
theatres list
Follow @fullhyderabad
Follow fullhyd.com on
About Hyderabad
The Hyderabad Community
Improve fullhyd.com
More
Our Other Local Guides
Our other sites
© Copyright 1999-2009 LRR Technologies (Hyderabad), Pvt Ltd. All rights reserved. fullhyd, fullhyderabad, Welcome To The Neighbourhood are trademarks of LRR Technologies (Hyderabad) Pvt Ltd. The textual, graphic, audio and audiovisual material in this site is protected by copyright law. You may not copy, distribute, or use this material except as necessary for your personal, non-commercial use. Any trademarks are the properties of their respective owners. More on Hyderabad, India. Jobs in Hyderabad.