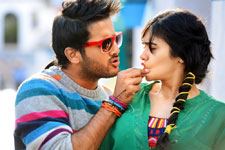 Pranita Jonnalagedda / fullhyd.com
EDITOR RATING
5.0
Performances
Script
Music/Soundtrack
Visuals
5.0
4.0
6.0
5.0
Suggestions
Can watch again
No
Good for kids
No
Good for dates
Yes
Wait for OTT
Yes
Before we begin, this isn't really relevant to the review, nor is it of significance, but we can't stop ourselves from mentioning this - it's about time that words like "pelli", "malli" and "vellu" in movies are pronounced with a folded tongue. This is not really difficult, you know, and besides, we don't think Telugu movies should be promoting incorrect Telugu.

Now on to Heart Attack. Puri Jagannath's usual style is to follow a formula - a hero, a heroine, a villian, a set of comedy sequences and fight sequences, and then string them together with a story. The director himself had said a few years back that he prefers to stick to a formula, since "he can't play with the producer's money".

But therein lies the test, because the story, or the string as we would like to call it, can make an impact only if it is well-established, plausible and impressive. Formulas, when they work, do so mostly with big stars and lavish production costs. But in the end, all the producer wants is returns, and we would like to think that a sensible story - treated right - can do so too.

There was a time when Puri Jagannath made interesting films like Amma Nanna O Tamil Ammayi and Pokiri (followed a formula, but an effective one). Not that Heart Attack doesn't have anything satisfying to offer, but the problem is that it isn't engaging enough to glue you to your seat for 2 hours and 20 minutes. There are moments when you think of opening your eyes wide, but this idea is pretty soon thwarted with a dull moment that follows.

Heart Attack is the story of a hippie and traveller, Varun (Nithiin), who is attracted to a girl, Hayati (Adah Sharma). But his attraction is a "no strings attached" one, and he doesn't want to involve himself in a relationship of any sort - all he wants is a "kiss".

The inevitable happens, and Hayati is in love with him in spite of knowing that her feelings won't be returned. Then, after her tearful goodbye, and a few days later, Varun realises that he has fallen for Hayati too. But he doesn't know where she is, and has to find her. The rest of the story focuses on how he finds her, the problems he faces, and how he overcomes them.

If this is a love story, the chemistry between the lead pair isn't crackling. Except for a "1-hour-3-minutes-kiss" that "burns around 3,000 calories", and reminds us a bit of a scene in Aashiqui 2, there aren't many moments of passion in this film.

The problem with Heart Attack is that it doesn't hold you for long at any point in its entire length. The drama that is required in a film like this is nowhere to be found, and most moments pass by without touching you. The film is reminiscent of many of Puri Jagannath's previous works, and has a huge hangover of his most recent movie, Iddarammayilatho.

But Nithiin does weave some magic into his role, and he partially reminds you of Ranbir Kapoor in Yeh Jawaani Hai Deewani. However, you can't miss the fact that his previous 2 performances could easily overshadow his act here. In Heart Attack, he's the typical Tollywood hero, whose punch can break bones, and whose stalking the heroine would automatically make her fall for him - because that's the formula, remember? There are flaws in his acting, but his good looks make up for it.

Added to Nithiin's histronics are Adah Sharma's good looks. But her assets don't end there, and she can emote pretty well. Then again, as in most Telugu flicks, the dubbing spoils the fun - it seems fake and, at times, irritating.

The rest of the cast - Brahmanandam, Ali, Ajay and a few new faces - do what they are required to, i. e., give dimension to the formula.

The director, whose knack for tongue-in-cheek dialogues and sequences is well-known, doesn't offer much here. And this doesn't help the screenplay, which falls flat. There are twists and turns, but nothing riveting and engrossing.

Also, although this is not new to our Telugu film industry, we do regret that filmmakers use racism as a way to invoke laughter. In this movie for instance, Brahmanandam says that he hates "everything" black, and it is implied that he won't be accepting a "black" son-in-law either. However, the fun doesn't seem to end there, and later Nithiin declares that fat women are "unfit" to be wooed.

Well, in spite of all the ifs and buts, Puri's sense of style is impressive. The foreign locales, the fight sequences and the actors all look elegant and sophisticated.

Anoop Rubens' music is trendy and peppy. The songs aren't extraordinary or incredible, but are easy on the ears. They have a 1960s feel, with a hint of Latino added. However, the background score, that manages to elevate a few sequences, is a turn-off at places, as it sometimes dominates the scenes.

Now that everything else is discussed, let's move on to the title - Heart Attack. The only reason you would associate this movie with a heart attack is during the scene in which a guy is being hit with a hammer - on the spine, and the neck too.

On the whole, Heart Attack is a visual treat, which could have been a completely different film had it received better treatment. Towards the end, you just wish that the movie was more of what the promos promised, and less of what it proved to be.
Share. Save. Connect.
Tweet
HEART ATTACK SNAPSHOT 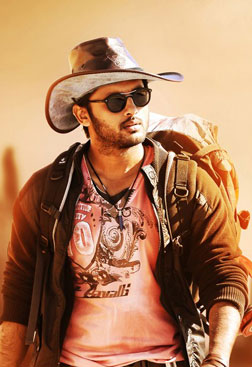 See Heart Attack full details
HEART ATTACK USER REVIEWS
1 - 1 OF 1 COMMENTS
POSITIVE  |  NEGATIVE |  NEWEST  |  OLDEST  |  MOST HELPFUL  |  LEAST HELPFUL
Imran on 9th Feb 2014, 12:43am | Permalink
Movies with monotonous stories seems to be in these days in the tollywood industry. Another successful attempt made an over rated director in this line is the movie 'Heart Break'. Besides, the routine Brahmi bits and a cute North Indian heroine trying hard to speak telugu words and over heroism there is nothing new and entertaining in this movie. The story line is weak, songs are too boring even for the first time listeners and plat is almost predictable and totally unexciting. This will most certainly retain my impression on our regional directors, besides few.
I would like to conclude by saying that one would get bored by watching this movie even though you are sitting in your house with your friends.
LEAVE A COMMENT
fullhyd.com has 700,000+ monthly visits. Tell Hyderabad what you feel about Heart Attack!
MORE MOVIES
Latest Reviews
Don't Worry Darling
Vikram Vedha
Ponniyin Selvan - 1
Naane Varuvean
Nene Vasthunna
more
Krishna Vrinda Vihari
Saakini Daakini
Where the Crawdads Sing
Everything Everywhere All At...
Aa Ammayi Gurinchi Meeku Che...
Brahmastra: Part One - Shiva
Oke Oka Jeevitham
Brahmastra: Part One - Shiva
Ranga Ranga Vaibhavanga
First Day, First Show
Contemporary Reviews
Pandavulu Pandavulu Tummeda
One By Two
12 Years A Slave
Paisa
Malligadu Marriage Bureau
more
Hasee Toh Phasee
Lone Survivor
Mandela: Long Walk To Freedo...
Minugurulu
Emo Gurram Egaravachu
Love You Bangaram
Jai Ho
Love Life
Paranthe Wali Gali
Random Reviews
Jawani Ki Kahani
Kubusam
Ratriki Velayera
Masti
XXX 2 (Hindi)
more
Namastey London
Pogaru
Quantum Of Solace
Rann
Ganga Putrulu
Night At The Museum: Secret ...
The Jungle Book
Raju Gari Gadhi 2
The Curse Of The Weeping Wom...
Doctor Strange In The Multiv...
SEARCH MOVIES
Dissatisfied with the results? Report a problem or error, or add a listing.
ADVERTISEMENT
SHOUTBOX!
{{todo.name}}
{{todo.date}}
[
ip{{todo.ip}}
]
{{ todo.summary }}... expand »
{{ todo.text }} « collapse
First  |  Prev  |   1   2  3  {{current_page-1}}  {{current_page}}  {{current_page+1}}  {{last_page-2}}  {{last_page-1}}  {{last_page}}   |  Next  |  Last
{{todos[0].name}}

ADVERTISEMENT
This page was tagged for
Heart attack movie review
Heart Attack telugu movie
Heart Attack reviews
release date
Nitin, Adah Sharma
Follow @fullhyderabad
Follow fullhyd.com on
About Hyderabad
The Hyderabad Community
Improve fullhyd.com
More
Our Other Local Guides
Our other sites
© Copyright 1999-2009 LRR Technologies (Hyderabad), Pvt Ltd. All rights reserved. fullhyd, fullhyderabad, Welcome To The Neighbourhood are trademarks of LRR Technologies (Hyderabad) Pvt Ltd. The textual, graphic, audio and audiovisual material in this site is protected by copyright law. You may not copy, distribute, or use this material except as necessary for your personal, non-commercial use. Any trademarks are the properties of their respective owners. More on Hyderabad, India. Jobs in Hyderabad.