Night At The Museum: Secret Of The Tomb (Hindi) Review 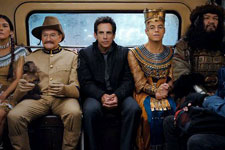 Nupur Barua / fullhyd.com
EDITOR RATING
6.0
Performances
Script
Music/Soundtrack
Visuals
6.0
4.0
5.0
7.0
Suggestions
Can watch again
No
Good for kids
Yes
Good for dates
Yes
Wait to rent it
Yes
Fact: franchises eventually run out of steam after the first couple of movies. Proof: Night at the Museum: Secret of the Tomb.

This is the third instalment in a brand that is already quite tiresome, but it does have a few positives going for it. It is the swansong of actors Robin Williams and Mickey Rooney, for one. And that should be enough for you to want to catch a glimpse. Also, Ben Stiller has declared that this is his final Museum movie, and while that is a relief, it is still somewhat sad - one can get used to him as the obnoxious security guard at a museum.

Which is what he still is in this movie, but with a few more responsibilities. Before we get to him, however, let us go back to 1938, when a group of archaeologists discover the gold tablet of Ahkmenrah, in Egypt. Despite warnings that the removal of this tablet from its resting place will bring about the end of the world, the archaeologists insist on possessing it for themselves.

Now, in the Museum of Natural History in New York, Larry (Ben Stiller) and Dr. McPhee (Ricky Gervais) are overseeing the nightly activities of the usual gang of characters that come alive at night. Larry has almost forgotten that Ahkmenrah (Rami Malek) had warned him, not too long ago, that the golden tablet is decaying, and that this may bring about unwanted changes. Unfortunately, tonight, the tablet is completely decayed, and has infected some of the other exhibits. Those untouched by the decay choose to flee, and Larry decides to get to the bottom of the mystery.

It turns out that the answer lies in the British Museum of Natural History, which is where Ahkmenrah's parents are kept. The chaos caused by the tablet costs McPhee his job, but he manages to use his contacts to get Larry an appointment with the British Museum. Larry goes there with the tablet, only to discover that some of his museum exhibits have accompanied him, too. After more chaos, Larry finds Merenkahre (Ben Kingsley) and Shepseheret (Anjali Jay), who tell him how the tablet can be handled. Before that, however, there is much that needs to be sorted out, after much confusion and pandemonium.

The biggest problem with the movie is that there is nothing new to hold your interest. Everything that seems like a deliberate insertion of a character, plot point or complication, probably is (deliberate, that is), and, worse, you HAVE seen it before. The narrative has too many plot points to concentrate on the larger story, although you cannot forget that it is about the pandemonium-creating tablet that has to be fixed, somehow. The abundance of characters is mindboggling, too. If you have not seen the earlier movies, it can get confusing.

Also, there are some unnecessary saccharine-sweet emotional plot points that seem manipulated to encourage tears, and you may just carried away by the whole emotional angle - whether it is about the parents who made a tablet for their baby, the father whose son cannot decide on a more serious career or the knight who is tragically in love with an idea of a person.

What is comforting is the world that the movie is set in. It is familiar, and suitably fantastical, yet acceptable, given the location of most of the action. To add to this is the fact that Teddy, Jedediah, Octavius and others are very much a part of the main action. The writer cleverly introduces the latest technology to the characters of the museum, especially YouTube, and they find more than enough opportunities to incorporate their knowledge in their practical lives. Everybody in the movie looks like they are having a blast.

The humour is predictable - never a good sign for a comedy. The dialogues are particularly unfunny, and although the lines are delivered with much sincerity, the film lacks the panache and even the intrigue of the first installment. The story may have shifted to the other side of the Atlantic, but the lacklustre script does not take advantage of the change of continents. Instead, it gives us an Indiana Jones in a museum.

Ben Stiller does not look too fresh. He is the driving force, but lacks his usual zest for a role. Ricky Gervais is too self-involved to notice the others, and he does a pretty decent job of his character. Owen Wilson is still dazed. The new entry, Dan Stevens, who plays Lancelot, is convincingly innocent and charming. Ben Kingsley and Rebel Wilson are apt casting. It is somewhat disconcerting that this is the last movie that Robin Williams, and Mickey Rooney, worked in, and it does bring a lump to your throat.

The visual effects department, however, turns out to be pretty dull in this film. The visuals are painstakingly simple, and not at all exciting. The camera work, too, is pretty staid. The music is average, too, but the editing is crisp enough to make you not regret the length of the film. 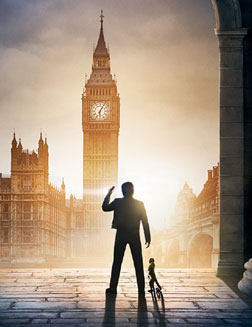 ADVERTISEMENT
This page was tagged for
night at the museum 2 movie in hindi hd
Night at the museum secreat of the tomb hindi dubbed movie download
Night at the Museum Secret of the Tomb Hindi Dubbed
night at the museum: secret of the tomb full movie download in hindi
last night in the museum 3 in hindi
Follow @fullhyderabad
Follow fullhyd.com on
About Hyderabad
The Hyderabad Community
Improve fullhyd.com
More
Our Other Local Guides
Our other sites
© Copyright 1999-2009 LRR Technologies (Hyderabad), Pvt Ltd. All rights reserved. fullhyd, fullhyderabad, Welcome To The Neighbourhood are trademarks of LRR Technologies (Hyderabad) Pvt Ltd. The textual, graphic, audio and audiovisual material in this site is protected by copyright law. You may not copy, distribute, or use this material except as necessary for your personal, non-commercial use. Any trademarks are the properties of their respective owners. More on Hyderabad, India. Jobs in Hyderabad.