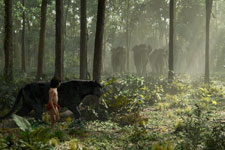 Josh / fullhyd.com
EDITOR RATING
9.0
Performances
Script
Music/Soundtrack
Visuals
9.0
8.0
7.0
10.0
Suggestions
Can watch again
Yes
Good for kids
Yes
Good for dates
Yes
Wait for OTT
No
It isn't without a little trepidation that we walk into these movies on beloved stories which when scratched bleed nostalgia. Hollywood with its omnipotent studios frequently plucks these stories and characters to churn out unimaginative, underworked and visibly manipulative material monetising the love you have for these figments of imagination. Sometimes it's the classics and at other times their own original creations (how many sequels and trilogies live up to their first parts?). So, no, we make no bones of it - we were afraid when we walked into The Jungle Book.

But Jon Favreau (director) has made a delight of a film. This is the same guy who made the underwhelming Iron Man sequel and had us legitimately worried. Yet, here he is with a movie that is as pleasant a surprise as it is an achievement. The achievement is on multiple levels, too. We'll get to that in a bit.

The plot pretty much takes the form we all know already. Mowgli (Neel Sethi) is the feral child (or man-cub as he is referred to in the jungle) rescued by Bagheera (Ben Kingsley), brought up as her own cub by wolf Raksha (Lupita Nyong'o), and hunted by the powerful and vengeful Sher Khan (Idris Elba). In his adventures to evade the bite of Khan's jaws, Mowgli encounters the hynoptic python Kaa (Scarlett Johansson), monkey king Louie (Christopher Walken), and most importantly, the lazy and lovely sloth bear Baloo (Bill Murray). Nothing unexpected there. It's all there in the books and the earlier Disney productions.

And this is where we can discuss what makes the new film a diverse achievement. This movie, a children's film in 2016 based on works that are over a hundred years old, and made with an A-list star cast with no expense spared, has three kinds of audiences to deal with. And without choosing a niche it delivers the goods to each one of them.

There are the fans, to start with, who will evaluate the film on the basis on the canon (and its adulteration in the later Disney film). The Jungle Book is all the more likely to be put under scrutiny in our country because of the extremely dear cartoon show a lot of us spent our childhoods with. The happy news is The Jungle Book will withstand your scrutiny and further make you light up in joy unless you are an unforgiving purist.

The actors are responsible for a good part of this work. They infuse some of their own personalities into their performances while fully retaining the characters' integrity. Bagheera is wise, Baloo is goofy, Kaa is hypnotic and Sher Khan is terrifying. That they are Kingsley, Murray, Johansson and Elba just makes the experience all the more immersive. Particularly, Murray and Neel Sethi (the kid is a brilliant find - he occupies the role so effectively he barely feels like he's acting) perform the celebrated Bare Necessities song with such frolic, it's nostalgic sugar rush. And Walken's schtick as the covetous King Louie is just perfect.

The other kind of audience the film has to deal with are the kind who are not interested in the origins of the story as long as it is a well-made film in its own right. This is where Jon Favreau opens the flood gates of awesomeness as he proves himself to be a phenomenal director that we haven't had the opportunity to witness before. Nothing prepared us for the brilliant world he constructs in this Indian jungle.

The visuals are so meticulously and so lovingly detailed, you'll believe in this world. You just have to marvel at the lush scapes, the anthropomorphic animals with lifelike eyes (something that animation often messes up), and the tremendously gripping action choreography (watch out for the chase interrupted by fleeing buffaloes). The spellbinding cinematography (Bill Pope), rousing score (John Debney) and seamless editing (Mark Livolsi) all throw their weight behind the fluid storytelling of their director. This movie here, it's a critic's Christmas.

The Jungle Book easily stands as its own film without any context. Fifteen minutes into the movie, you respond to the melancholy of Mowgli leaving his pack, and you feel like a member of the animal council yourself. When you catch yourself genuinely resenting Khan for his incisive diatribes or when you are overcome by an impulse to hug the generously fleshed Baloo (isn't he the emperor of all teddy bears?), you know you are watching a movie which has succeeded in sucking you into itself.

However, none of the old timers or the contemporary critics matter in front of the third kind of audience - the kids. Favreau, despite his enthusiam to make a canonically faithful work and technically dexterous film, never loses sight of the fact that his movie's essential purpose - just like that of its predecessors' - is to make these man-cubs fall in love with it. He avoids the cloying sweetness of some animated films and gives the young people a serious film which they can understand, invest in, and reap rich returns from.

As this reviewer walked out of the hall with a content smile on his face he heard a fellow patron about seven years old excitedly tell his mother, "I love Mowgli! I love Bagheera! I love Sher Khan! Oh, oh... And I looooove Baloo!" 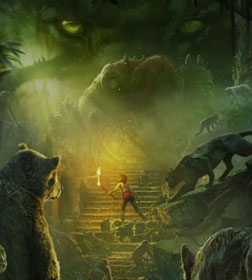 ADVERTISEMENT
This page was tagged for
moview riview jungle book 3d
The Jungle Book (3D) english movie
The Jungle Book (3D) reviews
release date
Neel Sethi, Ben Kinsgley
Follow @fullhyderabad
Follow fullhyd.com on
About Hyderabad
The Hyderabad Community
Improve fullhyd.com
More
Our Other Local Guides
Our other sites
© Copyright 1999-2009 LRR Technologies (Hyderabad), Pvt Ltd. All rights reserved. fullhyd, fullhyderabad, Welcome To The Neighbourhood are trademarks of LRR Technologies (Hyderabad) Pvt Ltd. The textual, graphic, audio and audiovisual material in this site is protected by copyright law. You may not copy, distribute, or use this material except as necessary for your personal, non-commercial use. Any trademarks are the properties of their respective owners. More on Hyderabad, India. Jobs in Hyderabad.