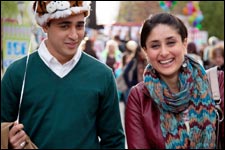 Samrat Sharma / fullhyd.com
EDITOR RATING
7.0
Performances
Script
Music/Soundtrack
Visuals
8.5
7.5
9.0
9.0
Suggestions
Can watch again
Yes
Good for kids
No
Good for dates
Yes
Wait for OTT
No
Another rom-com, I sighed, as I saw the trailers during my unfortunate Agneepath watching. Then I noticed the name Amit Trivedi pop-up, and I immediately perked up. The music will at least be awesome, and carry the film forward, I thought. After having seen it this weekend, I can actually tell you that Ek Main Aur Ekk Tu is actually a very good film.

It's not great, and it is certainly not timeless. Oh, you'll forget about it in a month, tops. But as you watch this extremely briskly-paced film, you'll be thoroughly entertained. It's short too, and you never feel it overstays its welcome at all.

Much like the protagonist Rahul (Imran Khan), the film starts off a tad boring and straight-laced. Rahul, it turns out, has always done what his parents wanted him to do, and constantly lives in their shadow. Silly, but okay. Then as we warm up to Riana (Kareena Kapoor), the film becomes as effervescent as she does, immediately perking up and moving into high gear.

He loses his job, and after a few other coincidences, ends up meeting her at a Christmas-eve party, and they get royally drunk. Morning dawns with the sobering realization that they also married each other in a fit and are now legally together. As they try and get their marriage annulled, they wait for 10 days for the appointed date and spend some time in each other's company, where, well, you know the rest.

As rom-com plots go, it isn't terribly original or even trying hard enough. The writing shines in the snappy dialog between the two leads. The film consists largely on the two of them talking, and full credit to Shakun Batra and his co-writer Ayesha DeVitre in creating a sense of fun and urgency to the endless banter.

As the film moves from Las Vegas to Mumbai, the humour actually picks up a notch, and as we hurtle towards the genuinely surprising end, it never lets up. It isn't sappy or overly melodramatic, making it the perfect popcorn fare.

The 2 leads have enough charm and chemistry o carry the film through as well - Imran Khan has the easy job of being stoic and serious, while Kareena carries the film when she makes all the jokes and provides the momentum. It's a great relationship that works well on screen.

The plot is light on people who surround the two of them, and it never actually acknowledges the whole silliness of it, but the snappy, fluff dialog and decent performances keep the film going well. It never overstays its welcome, and it never bores you, which is great in this day and age of poor remakes and badly-written comedies. Great spring watch.
Share. Save. Connect.
Tweet
EK MAIN AUR EKK... SNAPSHOT
EK MAIN AUR EKK TU SNAPSHOT

ADVERTISEMENT
This page was tagged for
Ek Main Aur Ekk Tu hindi movie
Ek Main Aur Ekk Tu reviews
release date
Imran Khan, Kareena Kapoor
theatres list
Follow @fullhyderabad
Follow fullhyd.com on
About Hyderabad
The Hyderabad Community
Improve fullhyd.com
More
Our Other Local Guides
Our other sites
© Copyright 1999-2009 LRR Technologies (Hyderabad), Pvt Ltd. All rights reserved. fullhyd, fullhyderabad, Welcome To The Neighbourhood are trademarks of LRR Technologies (Hyderabad) Pvt Ltd. The textual, graphic, audio and audiovisual material in this site is protected by copyright law. You may not copy, distribute, or use this material except as necessary for your personal, non-commercial use. Any trademarks are the properties of their respective owners. More on Hyderabad, India. Jobs in Hyderabad.