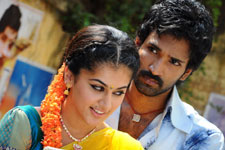 Kritika Deval / fullhyd.com
EDITOR RATING
5.5
Performances
Script
Music/Soundtrack
Visuals
6.0
6.0
7.0
7.0
Suggestions
Can watch again
No
Good for kids
No
Good for dates
Yes
Wait for OTT
No
To all those newly-weds who're having trouble connecting with their brand new significant others, here's a piece of advice from Gundello Godari. Get stranded on a bale of hay in a flooded Godavari, whilst your village is bobbing about under you.

Floating on the vast expanses of water on a surface that doesn't look too comfortable for connubial relations, with no food, water, or other people - there isn't much you can do but talk. Or, you could go to sleep. The couple in question, fisherman Malli (Aadhi) and his blushing bride Chitra (Lakshmi Manchu), chose to do the former, which resulted in us really wanting to do the latter.

If you don't know how they got stuck in that situation, you're either living under a rock, haven't seen a TV set in years, or have stumbled across this page by accident [in which case you might want to get back to whatever it was you were doing before you started webcrastinating (It's a word. Look it up.) ]. For the former two who still don't what Gundello Godari is all about, the plot goes thus.

The year is 1986, and the place is a high-cost "authentically" recreated fishing village in the East Godavari district of Andhra Pradesh. A massive flood of computer graphics hits the area, and swallows everything in sight. So, Malli and Chitra are stranded, and decide that the only way to pass time is by telling each other everything about their whole life, which makes perfect sense. What did not make much sense is why all of this is cinema-worthy.

Anyway, long story short (we wish!), Malli yaks about a spoiled little nymphet, Sarala (Taapsee Pannu) who ruined his life for most of the first half, and Chitra takes over in the second half to talk about a rooster-crazy boy-man who ruined her life. And, we're still thinking about how it all ties up. Maybe, you'll figure it out yourself.

The Good about this movie? We love our newcomer directors. It takes guts to make a big movie with a small cast, that is focused almost entirely on storytelling.

The Bad? We wish it was another tale he'd picked. Or, at least shortened this one.

The Ugly? Mumaith Khan's outfit. Ravi Babu's character. And a weird female in the second half, whose role we couldn't quite figure out.

Decent performances by most of the cast only go a short way in making you want to stay up while the plot sways along slower than the River Godavari.

Sandeep and Aadhi delivered performances that were quite memorable, but got lost in the completely forgettable storytelling.

The cinematography and the sets are exceptional. The bright colors, the little houses, the costumes, the fields, and, not to mention, the river - it is all a delight to watch.

The music, though not amazing, is only as bad as Ilaiyaraaja can get, which is not at all.

Oh, and did we mention Mumaith Khan's item song? Everything you could wish for, if that's the kind of thing your tastes lean toward.

All in all, if masala is what your heart craves this weekend, Gundello Godari won't exactly give you a heartburn.
Share. Save. Connect.
Tweet
GUNDELLO GODARI SNAPSHOT 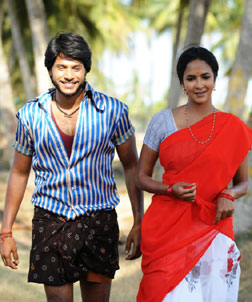 ADVERTISEMENT
This page was tagged for
Gundello Godari telugu movie
Gundello Godari reviews
release date
Aadhi, Lakshmi Manchu
theatres list
Follow @fullhyderabad
Follow fullhyd.com on
About Hyderabad
The Hyderabad Community
Improve fullhyd.com
More
Our Other Local Guides
Our other sites
© Copyright 1999-2009 LRR Technologies (Hyderabad), Pvt Ltd. All rights reserved. fullhyd, fullhyderabad, Welcome To The Neighbourhood are trademarks of LRR Technologies (Hyderabad) Pvt Ltd. The textual, graphic, audio and audiovisual material in this site is protected by copyright law. You may not copy, distribute, or use this material except as necessary for your personal, non-commercial use. Any trademarks are the properties of their respective owners. More on Hyderabad, India. Jobs in Hyderabad.