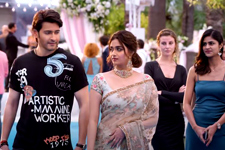 T J Reddy / fullhyd.com
EDITOR RATING
3.0
Performances
Script
Music/Soundtrack
Visuals
4.0
2.0
3.0
2.0
Suggestions
Can watch again
No
Good for kids
Yes
Good for dates
Yes
Wait for OTT
Yes
A wise man once laid down a maxim that governs all forms of banking. It goes, "If you owe the bank ten thousand dollars, it is your problem. If you owe the bank ten million dollars, it is the bank's problem."

Throughout our lifetimes, we've been privy to many a fraudster. Hell, Thalapathy Vijay gave us an era-long speech about one such fraudster in the 2014 film Kaththi. That speech reminded many an audience member of soliloquies that cap off scenes in a Samuthirakani directorial. Superstar Mahesh Babu, ever the wrong-righter, goes one step ahead and does his climactic speech directly to Samuthirakani himself.

But what coaxes this speech out of Mahesh (who plays a character named Mahesh), and which mass of the viewing audience is he saving this time?

Mahesh, who plays Mahesh, employs himself as a financier. He acts as his own recovery agent, too. A man who will not let a loan go unpaid, he will travel to the ends of the earth to collect the smallest of amounts. It does not matter to him if the expenses associated with his travels are higher than the loan amounts themselves - the man will get his money back, damn it! He will however also punch a tea glass into a debt collector's throat in a few days and lecture that man about the error of his ways. The lives of Telugu movie protagonists are quite hypocritical and unpredictable like that.

One of Mahesh's debtors is Kalavathi (Keerthy Suresh). A compulsive gambler and a raging alcoholic, Kalavathi borrows $10,000 from our creditor extraordinaire and fails to pay it back. Mahesh leaves the US of A and travels to India to get his money back. DAMN IT!

"Why would a multi-millionaire's daughter need to borrow a paltry sum of $10,000," you ask? The plots of Telugu movies are nonsensical like that.

When in India, Mahesh not only recovers his debts but devises a plan to recover money from the nation's largest debtors. A noble cause, indeed. But before we work our way through this movie's many issues, we'd like to create our own maxim of film reviewing: "If you are critical of a small actor's movie, it is the actor's problem. If you are critical of a superstar's movie, you are the problem."

The problems in Sarkaru Vaari Paata range from the negligible to the comical, to the deeply problematic, to the downright insulting.

The negligible problems comprise ill-placed songs, ill-paced scenes, ill-conceived metaphors, and illness-inducing punchlines. The issues in the film crossing over into comical territory are the instances of people rallying behind our hero after one underwhelming speech. A scene with a truck that is as stupid as the one from Spyder. A so-bad-its-good confrontation scene that fails at every technical level, including but not limited to the proper usage of green screen technology. We needn't write any jokes as the good jokes about the film are all on the big screen itself.

But no one cares about all that because we came to watch SSMB in action. Everything around him is just gravy.

While we want to concur with the sentiment, we find it hard to ignore the truly disturbing depiction of a "romantic relationship". While Mahesh Babu might have the comic chops to make cringe-worthy dialogues palatable, no man walking on God's green earth has the acting range to make this romance acceptable. I thought one of the advantages of having Mahesh Babu in your project was that he's a good-looking man, and a woman hitting on him wouldn't look out of place. Why, oh why, does he need to do creepy things to woo a woman? Is this the only romantic archetype that exists in mainstream cinema? Is this the version of Mahesh Babu we want to watch?

The filmmakers do have another version of Mahesh Babu to present at this juncture. This version has lived in America his whole life but is quite well-versed with the Indian financial system. This version of Mahesh Babu makes us think, "If solving our nation's financial problems was one speech from a tall and handsome man away, why hasn't it happened sooner?" I, for one, was ready to be inspired and sit my backside down and wait for a saviour. Soon, the realization hit me that this tall and handsome man said that "weekend farming" was the secret to saving agriculture in one of his previous films. His cheeky smile has tricked me a few times now. I won't have my intelligence insulted again.

One of the primary reasons for the success of most of Mahesh Babu's saviour-themed films is strong supporting characters who ground the story in some form of reality. Even if the star man is invincible, the people around him are not. Even if the star man is superhuman, the person around him helped us relate to the emotional stakes. A week ago, Keerthy Suresh delivered a performance that could be the best of her career in Saani Kaayidham. It was a performance that stood head and shoulders above a weak narrative. In Sarkaru Vaari Paata, she rises head and shoulders above the props littered around the filming sets. A prop that talks is quite valuable indeed.

Samuthirakani does his Samuthirakani thing, and Ajay and Subbaraju do their thing - they are character actors with no characters to act out. All of this is par for the course.

And so is Mahesh Babu finding himself in yet another forgettable outing. We've asked this before, and we'll ask it again, "Are we happy to see Mahesh Babu act in a movie, or are we happy to see him act in a good movie?" It is hard to accurately grade a performance like this one as there's nothing new the man is bringing to the table except a hairdo. Following suit, there's nothing new about Thaman's music either. A cacophony of loud noises can keep me awake, but it can't make me enjoy a film this lazily put together. Rarely do you see a star vehicle look this cheap and uninspired. The poor production design, the lack of innovative shot compositions, the comical VFX, and much more.

There are days I wish I could write reviews that read "Strictly for the fans", or "Enjoy it with your brains turned off" or "Paisa Vasool", or any other such platitudes. I can't use these phrases because this film doesn't even do justice to them. I hate having to try harder than the people in the film. The reviewers of Telugu cinema are paradoxes like that. 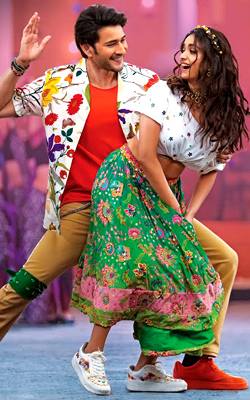 I have a genuine question! How do you deal with the blatant sexism, misogyny and objectification of women in Telugu cinema? When I asked my 10-year old nephew to clean his room, he asked me to get him married, so that his wife can do it for him. I had a heated argument with a guy my age (I am 29) about Garikapati's take on how women should dress and behave at home. It pains me when I see the current "youth" and even children stepping backwards into this regressive ideology. Telugu cinema has never understood the core values of feminism (or even basic values such as consent) and I can't think of any other medium that influences people and their thoughts to such a significant level in India. As reviewers you'd hope that people would read and introspect when you call out sexism and misogyny in movies — but it is always met with criticism and personal attacks. It is deeply disturbing to see superstars setting really poor examples with toxic masculinity, which in turn reinforces patriarchy in the society. I have a suggestion and I am serious about this — along with the performances, script, music and visuals metrics please add a sexism/misogyny metric and rate every movie on the scale of 1-10 with 1 being least sexist and 10 being the most. This may not have an impact initially, but feminists who read your reviews may benefit from deciding on whether or not to watch the movie. I can only wish for a day when all reviewers in India follow this metric and influence viewership of movies that endorse regressive ideologies. Please please please have it ready before the release of "F3".

Sincerely,
Shashank
fullhyd.com on 21st May 2022, 1:31pm | Permalink
@Shashank - thank you for the detailed and heartfelt note (and apologies for the delay). Those are very legitimate concerns. However, it is not clear how easy it might be to implement the suggestions you gave in reality. First, all of us will perhaps agree that most commercial Indian movies objectify women. Then, what is a plot point for one person may appear misogyny to another (think all those old movies with a rich, arrogant heroine being taken on by a working class, macho hero - e. g. Coolie No. 1 of Venkatesh). And some scenes might appear like harmless comedy to some and misogyny to others (think most of Manmadhudu). And male and female reviewers may define misogyny differently. There is, of course, a whole and fast-growing class of men who claim women inflict more agony on men now than the other way round, and might want a misandry rating :). (Okay, just kidding there!)

So yes, it might be tricky to have a rating like that for every movie, especially when there are multiple reviewers with different perspectives involved, and when only in a few cases is it clearly visible to all that something is misogyny. We will however ask our reviewers to mention in the text of the review if there is anything offensive to either gender.

P. S. Also, was F2 really misogyny? The movie seemed to have had its leading men under the jackboots of the women all through :). Kidding again - we know what you mean.
Shashank on 22nd May 2022, 8:37pm | Permalink
Thank you very much for the reply! I’d be lying if I said I wasn’t rhetoric with my suggestion. I am however serious about calling out sexist and downright offensive scenes and thanks for ensuring that. I believe movie reviews can sort of influence film makers to make better films -> as a case in point, SS Rajamouli received a lot of flak for the scenes involving Tamannah and Prabhas in baahubali-1. In my personal opinion, he redeemed himself by in his next two movies. Did he do that because of movie reviews? I don’t know. There’s definitely a correlation and I’d like to believe that movie reviewers have played a role by calling out problematic scenes. Also, for every SSR there’s a Sandeep Reddy Vanga (Anupama Chopra interview) who cannot understand constructive criticism..but the fact that a star director like SSR is somewhat distancing himself from problematic plot points, sexism and objectification of woman is a welcoming change, which in turn can influence his peers to gravitate towards more meaningful cinema. Remember how every director started resorting to violence (Ahem Boyapati Ahem) and using different kinds of swords to eliminate villains after watching films like Simhadri, Chatrapati and Vikramarkudu?

ADVERTISEMENT
This page was tagged for
Sarkaru Vaari Paata telugu movie
Sarkaru Vaari Paata reviews
release date
Mahesh Babu, Keerthy Suresh
theatres list
Follow @fullhyderabad
Follow fullhyd.com on
About Hyderabad
The Hyderabad Community
Improve fullhyd.com
More
Our Other Local Guides
Our other sites
© Copyright 1999-2009 LRR Technologies (Hyderabad), Pvt Ltd. All rights reserved. fullhyd, fullhyderabad, Welcome To The Neighbourhood are trademarks of LRR Technologies (Hyderabad) Pvt Ltd. The textual, graphic, audio and audiovisual material in this site is protected by copyright law. You may not copy, distribute, or use this material except as necessary for your personal, non-commercial use. Any trademarks are the properties of their respective owners. More on Hyderabad, India. Jobs in Hyderabad.