The writer looked around the grand but loudly decorated room. Gosh, was it done up badly. The poster of a bikini-clad heroine was beside the Nandi award. That's so low society and so very like a producer's taste. The writer personally would never do that. How can one ever put a pale Nandi award beside the killer bod of a robust heroine? His thoughts were wandering up and down the length of that poster when the producer walked in.

"Namaskaram producer gaaru, it's a pleasure to meet the man himself," he said enthusiastically, almost choking on his fabrication. The producer looked at him as though he was a corpse in a terrible car crash. "Are you here for the script reading?" he inquired, hoping for the writer to say no. "Yes saar", the writer spit out awkwardly, adding, "Nice room, saar. Very nice decorations." 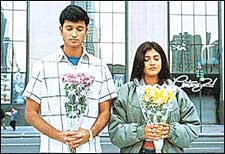 Having come for a script discussion, the producer was not surprised at the lack of a script. He knew how the game was played. He knew it too well. What bothered him was the length of the narration. It was almost twice the time a normal narration would take. 2 full minutes! This geeky writer was paying too much attention to detail. "The subham card will also be different saar," the writer bloated.

At that, the producer came out of his trance suddenly, grunted a little, and closed his eyes. The writer understood that this was the moment of truth, the time when all his prayers would be answered, the time when the producer would offer him some lunch. He was famished. Slowly, the producer lifted his head and announced, "Let's do the movie. But before that, I'll make a few suggestions." 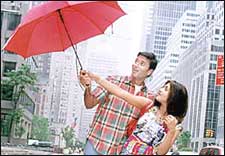 "The first suggestion is to make the hero something that nobody would ever relate to. Let's make him a priest or something." "Ha ha ha!" roared the writer, "Saar is very comical." The blood-boiling gaze the producer threw at him sent chills down his spine. "Priest it is then. We can then name the movie something very religious like Premaayanamaha. We can also get that lanky guy to do hero. He's perfect."

The producer paused for a second, collecting his thoughts, and continued, "Then we'll change the setup of the story to America. That way I get to see my son studying there. The hero-heroine meet in a village, romance in America, then climax back in the village." "Genius, saar, genius!"

"We'll make the heroine's dad an NRI. That'll cost us less. When he disagrees to their marriage, we can let the heroine run off to India after the hero and then have the climax here. The hero's buddy, with whom the hero went to America in the first place, will accompany her." "Aha, saar, super!" 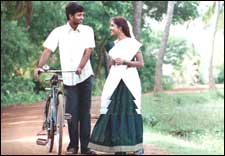 "After their quick romance in America, the hero comes back to the village. He's waiting anxiously for his love to come from America. When eventually his love comes to the village, he spreads his arms wide for love. Hero's fat buddy runs coming into his arms..."

ADVERTISEMENT
This page was tagged for
poojari go to america telugu movie
Premaayanamaha telugu movie
Premaayanamaha reviews
release date
Saandip, Kausha Rach
Follow @fullhyderabad
Follow fullhyd.com on
About Hyderabad
The Hyderabad Community
Improve fullhyd.com
More
Our Other Local Guides
Our other sites
© Copyright 1999-2009 LRR Technologies (Hyderabad), Pvt Ltd. All rights reserved. fullhyd, fullhyderabad, Welcome To The Neighbourhood are trademarks of LRR Technologies (Hyderabad) Pvt Ltd. The textual, graphic, audio and audiovisual material in this site is protected by copyright law. You may not copy, distribute, or use this material except as necessary for your personal, non-commercial use. Any trademarks are the properties of their respective owners. More on Hyderabad, India. Jobs in Hyderabad.