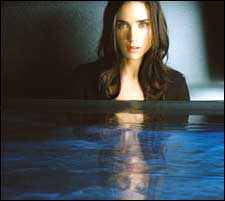 Priyanka Pulla / fullhyd.com
EDITOR RATING
3.0
Performances
Script
Music/Soundtrack
Visuals
NA
NA
NA
NA
Suggestions
Can watch again
NA
Good for kids
NA
Good for dates
NA
Wait for OTT
NA
Dark Water is literally full of dark water. Brown, muddy, rusty looking water. This water pours out of a leak in the ceiling of the house of Dahlia (Jennifer Connelly) and her daughter Cecilia (Ariel Gade). Theirs is a small, dark and depressing house where Dahlia is forced to roost 'cause she is in the middle of a divorce with her husband and has hardly any money.

One fine day, poor Dahlia discovers her little girl is playing with imaginative friends. On further probing, she discovers that the friend is a little girl called Natasha, her daughter's age. This disturbs her. On top of it, the water-pouring episodes become more and more ghastly. One-day Ceci's school bathroom gets flooded, another day the laundry room gets flooded. And it is that same dark dishwater all the time.

Yet, the poor, already disturbed Dahlia keeps wading through, not put off by the color and the places out of which it oozes (like the lavatories). She does not probe more than absolutely necessary. Probably because she is not sure if it is her inherent mental disturbances (from being a child abandoned by both parents) or something outside of her.

The movie comes to a head when one fine day, her lawyer, unable to remain indifferent to her crying need for help, comes and investigates the crazy leak in her house. And discovers that it's because a girl died in the water tank upstairs.

Well that's that for you. The movie has as much horror as opening your washing machine and finding that a lizard died inside. It's ring-ring-ring all the way, but nobody answers the phone. Natasha, the little girl who dies and wants her mom back, is Samara with a clearer complexion and maloccluded teeth. Cecilia is Aidan with long hair and a Barbie doll. And grass-blade-thin, Oscar-winning Connelly (Dahlia), is the fuller, less-acclaimed Naomi Watts (Rachel). In exactly the same role, but with mental disturbances and migraine for good measure.

At the end of the day, it's the clichés that let Dark Water down. If there were no The Ring or The Sixth Sense or any of the body of great horror movies earlier, then Dark Water would have scared. But now, people drum their fingers, jiggle their legs, tap their heels and take their turns guessing what happens next.

Every darn thing is predictable, and to top it all, the movie does not begin till after the interval. You simply have no idea what it's about - ghosts, schizophrenia, criminals or what. Of course, that's for those who haven't watched the aforementioned glut of horror flicks. If you have, the clues are everywhere. It's like a game of Clue really. Keep your eyes open and don't give in to the impulse to nod off, and you will know in advance, every single prop that is used to spawn the horror. The water tank, the strong-glass, the little girl whose mommy left her.

You will walk out disappointed unless watching the pretty Connelly is your main reward. Dougray Scott is hanging around too (as Dahlia's husband), popping in and out like a jack-in-the-box. He looks worn out, and sports an irritatingly acrimonious and belligerent attitude. And towards the end, when all is sort of falling into place, he romps along in step to get all sweet and tolerant with Dahlia.

A childishly simple movie that's gone wrong in so many places, the film makes one wonder if it is the finished version. It really is more like what you would see in the editing room. And taunts you to pounce with scissors and go clip-clip, chop-chop, and change!
Share. Save. Connect.
Tweet
DARK WATER SNAPSHOT

ADVERTISEMENT
This page was tagged for
Dark Water english movie
Dark Water reviews
release date
Jennifer Connelly, Ariel Gade
theatres list
Follow @fullhyderabad
Follow fullhyd.com on
About Hyderabad
The Hyderabad Community
Improve fullhyd.com
More
Our Other Local Guides
Our other sites
© Copyright 1999-2009 LRR Technologies (Hyderabad), Pvt Ltd. All rights reserved. fullhyd, fullhyderabad, Welcome To The Neighbourhood are trademarks of LRR Technologies (Hyderabad) Pvt Ltd. The textual, graphic, audio and audiovisual material in this site is protected by copyright law. You may not copy, distribute, or use this material except as necessary for your personal, non-commercial use. Any trademarks are the properties of their respective owners. More on Hyderabad, India. Jobs in Hyderabad.