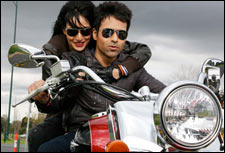 Deepa Garimella / fullhyd.com
EDITOR RATING
3.0
Performances
Script
Music/Soundtrack
Visuals
6.0
3.0
5.0
7.0
Suggestions
Can watch again
No
Good for kids
No
Good for dates
No
Wait for OTT
Yes
Crook isn't about crooks or gamblers or gangsters; it is named so simply because "Racial Attacks On Indians In Australia And Sunny-Deol-Like Indian Jingoistic Revenge Against Australian Thugs" wouldn't have made for a crowd-pulling title for an Emraan Hashmi film. The cool "it's good to be bad" lines are a prop. So is Emraan Hashmi's constant come-hither body language - he doesn't really get down to the lip-locks.

But then, there are things steamier than a lip-lock, some of which are available at Australian strip clubs, ready to take Emraan Hashmi home for the night. Again, Crook uses them because watching a bunch of Australian goons pitted against a bunch of Indian goons wouldn't have been very engaging beyond around 2 minutes. And it still isn't enough.

Anyway, the story begins with us being shown how Jai (Emraan Hashmi) is a crook who his guardian, a police officer (Gulshan Grover), is trying to change. In order to reform him, he gives Jai a new identity and a whole new set of identification papers to begin life afresh in Australia.

Jai is now Suraj - still amoral, but not into proactive crime. He happens to witness attacks on Indians by Australian gangs who stab them and call them names like "curry boy" and "Paki brother". However, he is indifferent to the violence because of a past he has had. Thanks to the chauvinistic brother (Arjan Bajwa) of the girl Suhani (Neha Sharma) he's hitting on, the battle attains scary proportions, and Suraj slowly comes around to taking a stand.

The movie has an undercurrent of bleakness all through, despite the fact that you know that all's going to be well in the end. Suraj flirting with Suhani and singing songs with her might have made for some interesting moments, if it weren't for the spineless and vacuous heroine.

But just as the potentially tender moments are done with, you have gruesome assaults, and Arjan Bajwa turning from protective Indian brother-like figure to maniacal revenge-seeker. Sometimes, the makers try and fit in saner solutions, like an Indian protest rally, and intermittent snippets of news channels reporting the bloodshed. But overall, not entirely contrary to your expectations, there's no depth to how the issue is treated.

Emraan Hashmi is as smooth as he always is. Neha Sharma is all self-conscious prettiness, but is low on substance. Quite like a teenager who's thrilled that she's around Emraan Hashmi.

Arjan Bajwa seems very sour - as though he was pulled out of a coma without his permission. Kavin Dave, who plays the rotund Punjabi geek is good but is cast in a blatantly generic "Indian-nerd" kind of character that could have been funnier.

Pritam's numbers sound like he stores these standard-issue tunes aside for rainy days, but they're about the only half-decent thing about Crook.

ADVERTISEMENT
This page was tagged for
Crook hindi movie
Crook reviews
release date
Emraan Hashmi, Neha Sharma
theatres list
Follow @fullhyderabad
Follow fullhyd.com on
About Hyderabad
The Hyderabad Community
Improve fullhyd.com
More
Our Other Local Guides
Our other sites
© Copyright 1999-2009 LRR Technologies (Hyderabad), Pvt Ltd. All rights reserved. fullhyd, fullhyderabad, Welcome To The Neighbourhood are trademarks of LRR Technologies (Hyderabad) Pvt Ltd. The textual, graphic, audio and audiovisual material in this site is protected by copyright law. You may not copy, distribute, or use this material except as necessary for your personal, non-commercial use. Any trademarks are the properties of their respective owners. More on Hyderabad, India. Jobs in Hyderabad.