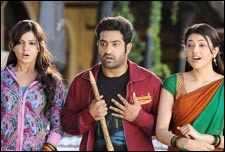 Deepa Garimella / fullhyd.com
EDITOR RATING
7.0
Performances
Script
Music/Soundtrack
Visuals
9.0
7.0
6.0
8.0
Suggestions
Can watch again
Yes
Good for kids
No
Good for dates
Yes
Wait to rent it
No
Brindavanam's opening credits roll out to the eponymous song from NTR's Missamma. The sequence leaves you wondering if it is ever possible to take these stars out of their clans, and the clans out of the stars. The film, however, doesn't. Brindavanam is the kind of movie that elevates itself above the easy reach of gasping fan-frenzy, and moves beyond shallow lineage-clinging.

While NTR Jr's name-dropping gets increasingly unnecessary (the actor has long since proved himself capable of effusing enough energy to last an entire flick without his grandfather's beaming image), the references merely serve to titillate NTR loyals that one bit more.

The film's theme is pretty formulaic, juggling as it does between blood-thirsty factionism and a desire to make "bad" people turn "good". NTR Jr. plays Krish, a college-going stud who goes around uniting couples in the face of ruthless goondaism. Thanks to his altruistic nature, his girlfriend Indu (Samantha) asks him to pose as her friend Bhoomi's (Kajal Aggarwal) boyfriend in the eyes of Bhoomi's family, because of certain "compelling" circumstances.

Krish travels to Rayalaseema to present himself to her family. To the surprise and shock of almost no one in the audience, Krish's well-intentioned efforts enter complicated territory. Bhoomi's family is spineless and in total control of the domineering father (Prakash Raj). Plus, Krish must also deal with some hardened sibling rivalry between Bhoomi's father and his estranged brother (Srihari).

Brindavanam is a fun film overall. The comedy, though not intellectually superior to the best you may have seen, is well-executed. Romance doesn't play much of a role in the plot, since the theme is the nitty-gritties of how Krish maneuvers his way into a hostile family. It's the regular hero-playing-God kind of movie, with Krish making sweeping changes in people, uniting entire warring villages, and teaching hateful clans how to love.

Melodrama is at a high all through, and so is the foolish Tollywoodian hope that callous people - who are long past their youth, by the way, and have been hateful all their lives - can suddenly be turned around using high-pitched speeches of righteousness. The dialogues are well-written, though, and do invite that occasional whistle from the audiences.

Plenty of avoidable violence mars what could have been a more pleasant story, however. The lengthy fight sequences are a desperate show of testosterone beyond a point, and eat up a lot of the film's time.

NTR Jr. is all shiny stardom and electricity, and lends weight to the comedy. He's helped along by well-conceptualized situational humour more than actual comedians, though Venu Madhav and Brahmanandam are a hoot. The veterans - Kota, Prakash Raj, Srihari - have pretty strongly-etched characters and some fine moments, too.

As for the heroines, Kajal Aggarwal gets more airtime than Samantha, who is relegated to an inconsequential role. Both of them glam it up in their own respective ways.

This is an extravagant movie, with obscenely rich people living in colossal mansions, Krish driving expensive cars, the couples dancing in exotic Swiss locales, and at least 2 dozen SUVs on call any time the men want a fight.

Thaman's music is loud and hardly melodious; but all that crowds want are NTR Jr's dances and the hint of a woman's bellybutton anyway, so no one's going to complain much on that front.

In sum, no path-breaker this, but an engaging watch it is.
Share. Save. Connect.
Tweet
BRINDAVANAM SNAPSHOT

RATING
8
Illogical_Moviegoer on 22nd Oct 2010, 2:54pm | Permalink
First of all, congrats to NTR for daring to try a family entertainer, in Venkatesh kind of role. We should say, he has done a decent job.
I also want to criticize NTR for the fact that he has tried to do a balancing act by including mass elements in an otherwise neat film. These young stars seem to be having lot of un-neccesary airs about their image, so they are getting slotted too early in their careers, which is not good for them.
Coming to the movie as such, it is good in its present format. If they manage to trim it by removing all the unnecessary fights, it will be a sure shot hit. The best part of the movie is the characterization of lead pair esp Ntr and Kajol. It was rather refreshing to see the Original Factionist Mukesh Rishi in a very decent business Tycoon role. The comedy came out well and the story was treated in a good manner, though you feel it was copied from several movies. Songs could have been better. Brahmi was good as usual


RATING
7
kumar on 20th Oct 2010, 10:55pm | Permalink
Ee review choosi velinanduku cheppu tisku kottukovali. Samantha tappa emana unda cinemalo. chi chi edo pedda topu cinemala hype icharu
RATING
1
sgorantl on 20th Oct 2010, 4:40pm | Permalink
good movie.. Can watch with entire family..
Saradhi on 19th Oct 2010, 4:30pm | Permalink
Movie is good. I like samantha's portion in the movie. She looked really cute and glamorous too. Kajal should stop dancing. Her horrible dances continue from Darling to this movie. Samanta is much better in that department, although she has little screen presence. Director has created an unnecessary confusion in the end. It is straight forward that he should select Samanta. Director didn't want to leave Kajal as single. Throughout the second half NTR says that he has the concern with Samanta and loves her. So, don't look for the logic. Music, comically choreographed fights, and dance choreography are excellent. NTR action is commendable.

Mungalla RamaKrishna on 19th Oct 2010, 12:55pm | Permalink
Film is a good family entertainer and its a triangular love story

RATING
7
Srinivas S on 17th Oct 2010, 4:39pm | Permalink
Overall movie is too good.....Can watch with whole family - a good family entertainer. No vulgarity.... which allows us to sit with our whole family comfortably & watch the movie.


Pros: Though I am not a fan of NTR - NTR's performance & family drama overall
Cons: Fights - not much convincing

ADVERTISEMENT
This page was tagged for
Brundhavanam telugu move
ghani brindavanam speeches
brindavanam movie
junior ntr full movie brindavanam
brindavanam telugu full movie
Follow @fullhyderabad
Follow fullhyd.com on
About Hyderabad
The Hyderabad Community
Improve fullhyd.com
More
Our Other Local Guides
Our other sites
© Copyright 1999-2009 LRR Technologies (Hyderabad), Pvt Ltd. All rights reserved. fullhyd, fullhyderabad, Welcome To The Neighbourhood are trademarks of LRR Technologies (Hyderabad) Pvt Ltd. The textual, graphic, audio and audiovisual material in this site is protected by copyright law. You may not copy, distribute, or use this material except as necessary for your personal, non-commercial use. Any trademarks are the properties of their respective owners. More on Hyderabad, India. Jobs in Hyderabad.