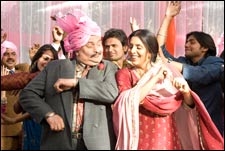 Deepa Garimella / fullhyd.com
EDITOR RATING
4.0
Performances
Script
Music/Soundtrack
Visuals
8.0
5.0
6.0
7.0
Suggestions
Can watch again
No
Good for kids
Yes
Good for dates
Yes
Wait for OTT
Yes
While Rishi Kapoor and Neetu Kapoor display adorable chemistry and bring in all their charm to this well-meaning, honest story, Do Dooni Chaar remains, inherently, sad. Middle-class frustrations don't make for happy movies nowadays. Especially if you're going to be describing every tiny bit of familial angst over the process of owning a possession beyond the family's limited means.

Where are all the "winner" stories where limitations were confined to a little black box in the beginning of the movie, outlined in broad strokes, and where the process of accomplishment was described in exhilarating detail?

Do Dooni Chaar is all about the Duggals "having" to buy a car at any cost, even though it seems too tough a task for the mild-mannered head of the family Santosh Duggal (Rishi Kapoor). After an essentially pathetic set of circumstances unfolds, the father and the surly teenage daughter end up getting their respective egos at stake in the idea of buying a car and proving a point to certain people - people who include rude neighbours and spoilt kids in the girl's college.

Do Dooni Chaar is a slice-of-life flick, not unlike the intent of an earlier Delhi-based story that deals with a similar issue and set of protagonists. But unlike Khosla, the villain in this story is not one oppressive entity - it's a bunch of complications, foremost among which is Duggal's profession of that of a low-paid school teacher.

Then, there is the angst around the whole modus operandi of buying a car, with the loans not coming in easy, the kids having adolescence issues of their own, and with Duggal's moral framework anguishing him even further.

The film would have been more feel-good if the heart-warming ending was dilated - it's happy and sweet, but comes in too late and is too little to augment the build-up of the worry in the rest of the flick. Duggal is a doormat all throughout - whether as a teacher, a husband, a father or a brother - and it is only in the end that he gets his fair due.

Rishi Kapoor is a treat to watch. He's pretty perfect as the genial, bumbling dad with a cool sense of sarcasm. Playing foil is Neetu Kapoor, who's not as much of a natural as the gentleman, but who makes for a pleasant, young-looking mother to a couple of cranky teenagers. The couple infuses a lot of warmth in the movie, and is capable of triggering nostalgia amongst viewers who seek it.

Aditi Vasudev plays Payal, Duggal's daughter, and is unfortunately stuck with about 2 emotions. She displays much maturity in acting, though, and is likely to be seen in more cinema. The rest of the cast is full of talent as well.

The music is only an accessory, since this is a movie banking on the script and the performances. And watch out for plenty of authenticity in the middle-class setting and nuances in the visuals.

ADVERTISEMENT
This page was tagged for
do dooni chaar in hindi
do dooni chaar hindi
Do Dooni Chaar hindi movie
Do Dooni Chaar reviews
release date
Follow @fullhyderabad
Follow fullhyd.com on
About Hyderabad
The Hyderabad Community
Improve fullhyd.com
More
Our Other Local Guides
Our other sites
© Copyright 1999-2009 LRR Technologies (Hyderabad), Pvt Ltd. All rights reserved. fullhyd, fullhyderabad, Welcome To The Neighbourhood are trademarks of LRR Technologies (Hyderabad) Pvt Ltd. The textual, graphic, audio and audiovisual material in this site is protected by copyright law. You may not copy, distribute, or use this material except as necessary for your personal, non-commercial use. Any trademarks are the properties of their respective owners. More on Hyderabad, India. Jobs in Hyderabad.