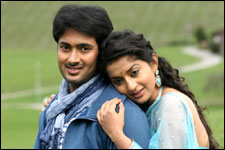 Deepa Garimella / fullhyd.com
EDITOR RATING
1.0
Performances
Script
Music/Soundtrack
Visuals
5.0
2.0
1.0
2.0
Suggestions
Can watch again
No
Good for kids
No
Good for dates
No
Wait to rent it
No
Alladista is a movie that makes less and less sense as it progresses. The makers, who weren't content with letting this loose merely on their native audiences (this is a dubbed movie), have also got an expert team of editors to chop off enough to keep its length to a tolerable level - thereby letting the story remain unintelligible for large parts.

Which leads us to a few questions - how much longer was this movie originally, and who could have sat through the full-length version?

Alladista features a fresh-looking Uday Kiran and a fresh-looking Meera Jasmine in the lead, and whatever else it may not do for them, it sure makes you think about the hurtling fall from grace these two actors have had - and still are having - before they could even have a real shot at stardom.

Uday Kiran plays Surya, a forest officer who is posted in an area that witnesses heavy smuggling of sandalwood and teak. The smugglers try bribing Surya, but since he is an upright officer, they want him dead.

Now Surya's best friend, Nagendran (Richard), is some sort of an intellectual who keeps making speeches on women's rights but harasses his own wife for dowry. When this wife goes to Surya for help, the two land up in a guesthouse to confront Nagendra. Nagendra is then found to be not just drunkenly frolicking with several women at once, but also to be in cahoots with the smugglers. They have convinced him to finish off Surya.

Suddenly, the lights are switched off and someone kills Nagendra's wife. The murder is pinned on Surya, who is promptly taken to jail. This leads to Surya's mother resigning from the post of a judge so that she can fight the case for Surya (however the hell that counts as legal procedure).

Meanwhile, Surya had fallen in love with a colleague Meghana (Meera Jasmine), who, despite having roots in a poor family, dreams of becoming an IPS officer. It is she, by the way, who takes up Surya's case to hunt down the real murderer.

Then, there is Rambha in a tiny role as Nagendra's ex-girlfriend - she provides damning evidence that Nagendra is the real murderer of his wife.

Alladista was reportedly based on a novel that Karunanidhi wrote. It may have been a half-decent story - we'll never know. This is a hasty, messed-up, unskilled dub-job of what was clearly a bad movie even in its original form. The lame lines and the tacky melodrama and violence make this film much less than tolerable.

Plus, there are the virtues of dubbing - there's been no effort to change the sign boards or all the Tamil signage, and the lip-sync seems to have been merely a formality.

Both Uday Kiran and Meera Jasmine are pleasant to watch. They're emotive - even Uday Kiran - and it's pretty saddening to watch them be a part of this tripe. Richard as Nagendran makes do with a few expressons, and could have done with a hair job. Rambha could have been a restorative to the script, but by that time, everyone's too tired to notice.

The music deserves special mention. The songs are unadulterated acoustic horror, and, by several standards, seem to be the reason the phrase "out of tune" was invented. Except for an item song by Lawrence - which is "good" only because the man's a real breath of fresh air, with his steps - the rest of the songs are to be heard to be believed. And the editing, like we mentioned, is haphazard, and lead to much of the script being garbled.

In all, this is a film that no number of familiar faces on the posters should lure you into watching. Stay away.
Share. Save. Connect.
Tweet
ALLADISTA SNAPSHOT

ADVERTISEMENT
This page was tagged for
alladista telugu movie
alladista telugu full movie download
alladista
Alladista telugu movie
Alladista reviews
Follow @fullhyderabad
Follow fullhyd.com on
About Hyderabad
The Hyderabad Community
Improve fullhyd.com
More
Our Other Local Guides
Our other sites
© Copyright 1999-2009 LRR Technologies (Hyderabad), Pvt Ltd. All rights reserved. fullhyd, fullhyderabad, Welcome To The Neighbourhood are trademarks of LRR Technologies (Hyderabad) Pvt Ltd. The textual, graphic, audio and audiovisual material in this site is protected by copyright law. You may not copy, distribute, or use this material except as necessary for your personal, non-commercial use. Any trademarks are the properties of their respective owners. More on Hyderabad, India. Jobs in Hyderabad.