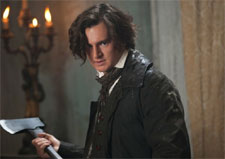 Deepa Garimella / fullhyd.com
EDITOR RATING
5.0
Performances
Script
Music/Soundtrack
Visuals
8.0
5.0
6.0
6.5
Suggestions
Can watch again
No
Good for kids
No
Good for dates
No
Wait for OTT
Yes
As if the young Abraham Lincoln didn't have enough headaches of his own, teaching himself law and running for Congress, Abraham Lincoln: Vampire Hunter gives him another pastime - slaying the undead.

But wait. Why Abraham Lincoln? What intriguing parallels does vampire-hunting have with the real issues Lincoln fought for in his time? What symbolism about the learned American President is this movie pregnant with? What dramatic denouement does Abraham Lincoln bring his vampire-slaying career to?

This is what makes Abraham Lincoln: Vampire Hunter not only a standard slasher movie - the momentousness of whose protagonist is only incidental - but also a sort of trivialization of history.

The plot is all about how Abraham Lincoln (Benjamin Walker) learns to destroy (not "kill", since they're already dead) vampires after his mother is killed by one. He seeks lessons from expert vampire-hunter Henry Sturgess (Dominic Cooper), before he sets off to Springfield to make it on his own. In Springfield, Abraham Lincoln works at a store by day and fights the fangs by night. Sturgess keeps marking Lincoln's targets, and Lincoln keeps hunting them down and finishing them.

Lincoln now attracts the attention of top vampire Adam (Rufus Sewell), who has plans for America. Meanwhile, a bitter truth leads Lincoln to give up his vampire-seeking agenda and focus on his marriage and his ascending political career.

Later, he becomes president, and Issues of slavery and vampire hunger merge ludicrously, forcing Lincoln to get back in business.

From the time the young Abraham Lincoln loses his mother, we are taken through Lincoln's days of his youth in Springfield, all along enticed with the possibility of some heavy-duty drama involving some of his real-life charisma. But it is only when the bloodsuckers are around that the film seems to have any life, and events like Lincoln's engagement and wedding are hurriedly and abruptly dealt with, the narrative never really connecting to you.

And yet, the vampire-slaying lacks inventiveness of any sort, depending as it does entirely on brute force. There's no cinematographic skill on display either, although the gore, to its credit, is suitably icky. The lengthy train sequence at the end is quite striking, though. If it's just the gashing and the chopping and the dirty fangs that you've come to see, the movie is about all right to sit through.

The performances, except for that of Mary Elizabeth (who plays Mary Todd, Lincoln love interest and subsequently his wife), are convincing. Benjamin Walker is good as Abraham Lincoln, and better when playing the much older Lincoln. And you wish Dominic Cooper had a bigger role to play.

The movie's visuals are disappointing, and the dull color palette (chosen to convey the ancientness of the time in which it was set) makes things even more tiresome. 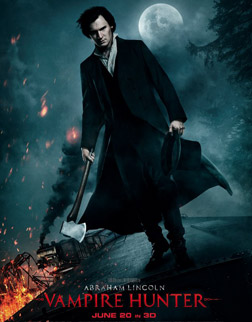 ADVERTISEMENT
This page was tagged for
Abraham Lincoln - Vampire Hunter (3D) english movie
Abraham Lincoln - Vampire Hunter (3D) reviews
release date
Benjamin Walker, Dominic Cooper
theatres list
Follow @fullhyderabad
Follow fullhyd.com on
About Hyderabad
The Hyderabad Community
Improve fullhyd.com
More
Our Other Local Guides
Our other sites
© Copyright 1999-2009 LRR Technologies (Hyderabad), Pvt Ltd. All rights reserved. fullhyd, fullhyderabad, Welcome To The Neighbourhood are trademarks of LRR Technologies (Hyderabad) Pvt Ltd. The textual, graphic, audio and audiovisual material in this site is protected by copyright law. You may not copy, distribute, or use this material except as necessary for your personal, non-commercial use. Any trademarks are the properties of their respective owners. More on Hyderabad, India. Jobs in Hyderabad.