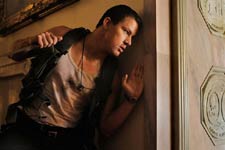 Kritika Deval / fullhyd.com
EDITOR RATING
7.0
Performances
Script
Music/Soundtrack
Visuals
6.5
4.0
6.0
7.0
Suggestions
Can watch again
Yes
Good for kids
Yes
Good for dates
No
Wait for OTT
No
O. O. G! This has to be one of the most unintentionally hilarious, and/or hilariously unintentional, films that this writer has seen in recent times (the last one being a Schwarzenegger crapfest). Firstly, the flick's called White House Down, so there's no prizes for guessing what it's all about. Secondly, this mindless destruction of the USA's most iconic architectural icon has been choreographed by screenwriter James Vanderbilt, a guy whose family pretty much built most of the USA's iconic icons (they sort of wandered and built, and hence their name - don't look it up, it's classified information). So, basically, it's all funny even before you've seen it.

And then, you see it. Where do we begin? The hero, John Cale (Channing Tatum) (no, really, his name is John Cale - we're not just using a messed-up version of John McLane to be funny. The Vanderbilt dude wrote it, remember?). So, John Cale is a small-time cop in Washington who wants to become President James Sawyer's (Jamie Foxx) bodyguard so that his little, and freakishly-into-politics, girl Emily (Joey King) can look upto him again. He applies for the job, but doesn't get it 'coz he's got no college degree.

But then, some jackasses start taking the White House hostage, and Emily and the Obama-ish Prez (not just because of his skin colour - we don't condone racism here) get stuck. It's time for a hands-on demo of just how right Cale is for the job.

First off, it isn't the Arabs. Second of all, someone should tell the makers that a pro-peace flick would be a lot more convincing if it didn't involve a pro-peace Prez with an AK, and grenade necklaces. But then, it's all so "f*** y'all war-mongering crazies! Cold day in hell...! Here come the grenades! Priceless antique German clock works as well as dynamite! Shoot! Hit! Blow! (sorry about that outburst, we still haven't gotten over our high)", that it isn't until much later that you think of any of this.

There's also room for some better-than-okay performances by a whole bunch of people who look like they're having a helluva lot of fun. Makes you wanna go all "Hey! Where's my grenade / AK-47 / priceless antique German clock?"

Channing Tatum's well on his way to becoming a worthy Bruce Willis successor, and is a whole lot easier on the eyes. Jamie Foxx is good too, but that's as much due to his performance as due to the fact that his character was wonderfully etched.

Joey King is cute as a button, and, unlike a lot of other kick-butt kiddie heroes, believably cries her eyes out while doing heroic things like secretly uploading to YouTube the identities of the crazies who think they've taken over the White House, up until Daddy shows them otherwise.

There are other pesky details that boggle your mind, like the fact that all the mini-villains seem to be doing it all for different reasons, the most retarded of which is money (you don't burn down the White House for money, dumasses, you kidnap Paris Hilton, and be thanked by the rest of the world in terms of donations). And then comes the next ka-blam, wiping away the insidious specks of logic trying to regain control of your mind.

As you can already gather from this confused ramble, the visuals are fantastic. They're everything you dream of when you're fantasizing the destruction of the White House in your spare time (or maybe that's just us). The action sequences are excellently choreographed, and, as with every good action movie, are sufficiently supported by just enough whimsy, in terms of characters or grenade necklaces. The soundtrack is pretty much bits and pieces of Star Spangled Banner, interspersed with sounds of explosions. All of it just works.

The whole movie just works. If you're any kind of action lover, you'll love White House Down. If you love bizzarely simplistic politics, you'll love it. If you love watching heritage monuments getting destroyed, you'll love it. For more laughs, please take a look at the cast and the crew.
Share. Save. Connect.
Tweet
WHITE HOUSE DOWN SNAPSHOT 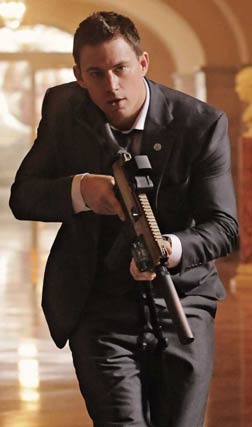 ADVERTISEMENT
This page was tagged for
White House Down english movie
White House Down reviews
release date
Channing Tatum, Jamie Foxx
theatres list
Follow @fullhyderabad
Follow fullhyd.com on
About Hyderabad
The Hyderabad Community
Improve fullhyd.com
More
Our Other Local Guides
Our other sites
© Copyright 1999-2009 LRR Technologies (Hyderabad), Pvt Ltd. All rights reserved. fullhyd, fullhyderabad, Welcome To The Neighbourhood are trademarks of LRR Technologies (Hyderabad) Pvt Ltd. The textual, graphic, audio and audiovisual material in this site is protected by copyright law. You may not copy, distribute, or use this material except as necessary for your personal, non-commercial use. Any trademarks are the properties of their respective owners. More on Hyderabad, India. Jobs in Hyderabad.