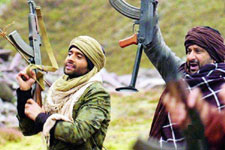 Nupur Barua / fullhyd.com
EDITOR RATING
4.0
Performances
Script
Music/Soundtrack
Visuals
6.0
3.0
5.0
6.0
Suggestions
Can watch again
No
Good for kids
No
Good for dates
Yes
Wait to rent it
No
If director Ashish R Mohan is to be believed, you cannot survive in Pakistan unless you are (a) carrying a weapon, preferably a gun, or, (b) as dumb as a hat. Welcome 2 Karachi, a farcical satire, or satirical farce (take your pick), endorses this bizarre belief, and if you are suitably anti-Pakistan, you may applaud the director's version of what happens to innocent Indians when they are stranded in the enemy country.

Shammi (Arshad Warsi) and Kedar (Jackky Bhagnani) have known each other for a long time. Shammi was dishonourably discharged from the Indian Navy for sinking a submarine, which, as Kedar points out, is an oxymoron - how can you sink something that is made to travel underwater? Kedar himself is obsessed with the USA, but he has been denied a visa too many times to count, despite changing his name every time. His father, Mitesh Patel (Dalip Tahil), is a successful businessman, who realises his son is useless, but nevertheless puts Shammi and Kedar in charge of a wedding event to be celebrated on a yacht.

Shammi sees this as an opportunity for both of them. After all, he reasons, one needs a visa to fly to the USA, not to sail there. The yacht is the best chance they have of getting to the US shores, and so they set off, without waiting for the wedding guests. A storm later, they are washed up on the shores of Pakistan, and now they need to survive this barbarian land of angry men, and the various terrorist groups that roam freely.

As they move from one group to another, aware of the fact that their lives are in danger, Shammi and Kedar do not lose touch of their naiveté, nor do they freak out too much. In fact, they also have plenty of fun while they travel across the region, until they are faced with the serious business of saving young lives before the latter are blown to kingdom come. Will they be able to become the heroes that they are, or will they insist on messing up things even further, given their penchant for stupidity?

The script thrives on clichés, which is what a satire is about, presumably. The characters, therefore, are stereotypically predictable, at least in their dialogues and interactions. Logic is not applicable to a screenplay such as this, of course, but you'll still wish that it were better structured. The number of characters that flit in and out of the story is mind-boggling, and although Shammi and Kedar are the anchors, it becomes difficult to keep track of who did what, to whom, and why, and when. Even if the director wants to keep it real, and maybe raise certain issues, you will be left too breathless (and not in a good way) by the numerous plot points to even care, forget comprehending the story.

Slapstick humour works for movies such as Welcome 2 Karachi, and some of the dialogues are worth a chuckle, no matter how irrelevant. Double meanings and word play are a part of the script, and even when they make absolutely no sense, they still entertain. Certain situations, such as Shammi's lack of knowledge, seem forced - after all, he is an educated naval officer, and not knowing who the President of the United States is is carrying it a little too far. Besides telling you that even vegetable vendors sell potatoes at the rate of bullets, the movie also points out that if you are a vegetarian, then Pakistan may not be the best place to visit. Not that the movie acts as a travelogue - far from it - but it may just put you off from ever visiting the country.

Despite the not-so-intelligent content of the movie, you cannot help but respecting the fact that it never takes itself seriously. It is almost as if the director knows that he is offering a mediocre film to the modern, well-fed (in movies) audience, and has a blast (literally) doing so. He tries to balance out the name-calling, so that even if the Pakistanis have to bear the brunt of most of the jokes, some of the comments on Indians, Americans, Chinese and Israelis are too uncomfortably close to home. In short, nobody is spared, especially not the Indians, and specifically not the fafda- and money-loving Gujaratis.

Arshad Warsi is the saving grace of the movie. His comic timing is impeccable, never mind the quality of the screenplay. He is a delight to watch, even when whatever he says does not make sense. Jackky Bhagnani has some terrific nonsensical dialogues, but he cannot match his co-star's timing. He still has a long way to go, although here he tries really hard to be funny (and almost succeeds).

Dalip Tahil plays his role with the confidence that can only come from having acted in hundreds of films. He does not seem to question the logic (or lack of it) in his character. The actors playing the various Pakistani characters are relatively commendable, and even funny. Lauren Gottlieb does not have much to do except look striking.

Since the film is obviously not shot in Karachi, the production design department does its best to replicate the clichéd version of it in sets. It is convincing, in parts, especially with colourful trucks thrown in every now and then into the scenes. The costumes reflect our idea of what daily life in Pakistan entails, and seem pretty authentic. Given that this is a movie dependent on banalities and clichés, every visual is carefully planned to give you the impression that you expect, at least of Pakistan.

The cinematography follows the plans, and together with the production and costume designs, gives you a sequence of stunning yet depressing visuals, as well as some great shots of landscape. The music is average. The editing could have made the second half, specifically, crisper, especially since there is more action there.

Welcome 2 Karachi, as mentioned, is a representation of an Indian nightmare - or at least, of an Indian stuck in Pakistan. However, it also tells us that our neighbours are dumber than we are, and so it may not be as dangerous as we presume. It does not paint a flattering picture of either nation, and the result is a tiresome film with a few laughs here and there. Watch it only if you have nothing better to do this weekend, or if you are in dire need of some unhelpful nonsense.
Share. Save. Connect.
Tweet
WELCOME 2 KARACHI SNAPSHOT 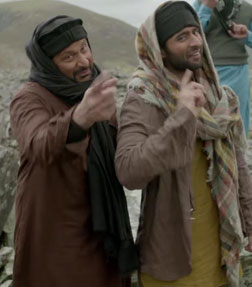 ADVERTISEMENT
This page was tagged for
Welcome 2 Karachi hindi movie
Welcome 2 Karachi reviews
release date
Jackky Bhagnani, Arshad Warsi
theatres list
Follow @fullhyderabad
Follow fullhyd.com on
About Hyderabad
The Hyderabad Community
Improve fullhyd.com
More
Our Other Local Guides
Our other sites
© Copyright 1999-2009 LRR Technologies (Hyderabad), Pvt Ltd. All rights reserved. fullhyd, fullhyderabad, Welcome To The Neighbourhood are trademarks of LRR Technologies (Hyderabad) Pvt Ltd. The textual, graphic, audio and audiovisual material in this site is protected by copyright law. You may not copy, distribute, or use this material except as necessary for your personal, non-commercial use. Any trademarks are the properties of their respective owners. More on Hyderabad, India. Jobs in Hyderabad.