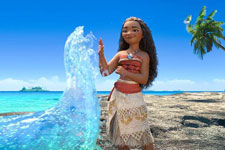 Eight-year-old Moana, rendered sassy by voiceover Auli'i Cravalho, lives in a tribe of Polynesian heritage on a remote island somewhere in the vast glittering and sapphire waters of the Pacific. She also happens to be the beloved daughter of the clan's chieftain, and is the sole heir to his throne. And so she must learn to govern her people, who are largely farmers and fisherfolk.

But the free spirit has a vision of her own. She sees herself traversing the high tides just like her ancestors - legendary seafaring voyagers - once did before discovering Motunui. However there is a major obstacle to this dream. It is prohibited for Motunui-ans to venture out of the Reef, for lava monster Te Ka inhabits the beyond.

As per mythology, Maui (voiced by Dwayne Johnson "The Rock"), a hulking shape-shifting demigod, steals the heart gem from island goddess Te Fiti, in order to harness its power. His Herculean might is overcome only by his bloated ego. And so he goes on to confront a lava monster named Te Ka residing in a volcanic island beyond the Reef and resembling the description of Hades (a Greek god), just to prove his divinity.

But Te Ka defeats him in a titanic battle - a visual masterpiece from the workstations of Disney. Maui also loses his weapon - a giant magical fishhook that helps in shapeshifting - without which he is powerless. And the heart stone, which is basically responsible for the health of all floral species in the Pacific, is lost, too.

A thousand years later, the absence of the gem starts affecting plant and animal life on all islands in Oceania, and also the harvest in Motunui. The islanders try everything from expanding crop cover to fishing near the Reef, but to no avail. But Moana is mature enough to understand that the only way to prevent her people's extinction is to find Maui, retrieve the gem and take it back to Te Fiti.

And so she ventures out alone into the Great Blue beyond, with nothing but her silly pet rooster Hei Hei (Alan Tudyk), a raft, and the Fishhook constellation and terrifying ocean currents to guide her. After surviving the unforgiving waters, she finally discovers Maui stuck on a desolate island. After a lot of persuasion, an unwilling Maui agrees to take her to Te Fiti. Together, they embark on an emotional and spirited journey, and ride on the violent waves to face off the lava titan who awaits them in his fiery chasms.

Moana is a feminist delight as its lead is a young girl who braves the unpredictable ocean and monsters all alone, using mostly her wit, empathy and spirit. It also has a tribe that reveres their daughters and treats them as equal to men, even for roles in administration. The movie also brings out the often ignored Polynesian culture, even featuring a 5-second Maori Haka war dance by Maui. The directors have sure done their homework before taking up something as sensitive as the portrayal of a culture.

The animated Moana wears confidence and courage as easily as you wear clothes. Cravalho does a brilliant job voicing her, and pours life into her character and persona.

Where there is Dwayne Johnson there is brawn and laughter, and that is true even for his Maui. Johnson's voice reflects the brute and cocksure Maori demigod perfectly, and his dialogue delivery never fails to have the desired effect on you.

But what this movie needs to be remembered for are its visuals. Everything from the vast blue Pacific and the dreaded lava chasms to character designs have been rendered flawlessly. Maui with his sentient tattoos and a fierce Maori look is a complete beast, or more respectfully, a warrior-god. Disney has set a new bar for cutting-edge animation and CG. The VFX crowns were previously worn by movies including Interstellar and Avatar. And now it is now safe to say that the crown can be passed on to Moana.

The music (Mark Mancina, Lin-Manuel Miranda, Opetaia Foa'i) and the soundtrack are captivating, and help transfer all the right emotions from the big screen to your heart. You can ignore the oft terrible lyrics of a few songs in this musical, because despite the non-rhythmic phrases, Opetaia Foa'i's vocals are worth remembering.

Even though the direction makes the movie dawdle when Moana is out in the sea all alone, somewhere during the last 15 minutes of the movie it cleverly covers that up, and no man or demigods or monsters or funny giant lobsters can stop this girl from saving her world.

Not only your kids, even you may find yourself enjoying Moana.
Share. Save. Connect.
Tweet
MOANA SNAPSHOT 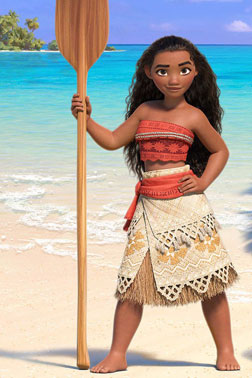 ADVERTISEMENT
This page was tagged for
moana english telugu movie
Moana english movie
Moana reviews
release date
Auli'i Cravalho, Dwayne Johnson
Follow @fullhyderabad
Follow fullhyd.com on
About Hyderabad
The Hyderabad Community
Improve fullhyd.com
More
Our Other Local Guides
Our other sites
© Copyright 1999-2009 LRR Technologies (Hyderabad), Pvt Ltd. All rights reserved. fullhyd, fullhyderabad, Welcome To The Neighbourhood are trademarks of LRR Technologies (Hyderabad) Pvt Ltd. The textual, graphic, audio and audiovisual material in this site is protected by copyright law. You may not copy, distribute, or use this material except as necessary for your personal, non-commercial use. Any trademarks are the properties of their respective owners. More on Hyderabad, India. Jobs in Hyderabad.