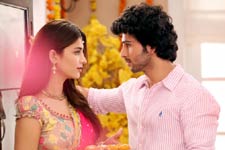 Swayamsrestha Kar / fullhyd.com
EDITOR RATING
5.0
Performances
Script
Music/Soundtrack
Visuals
6.0
4.0
5.0
6.0
Suggestions
Can watch again
No
Good for kids
No
Good for dates
Yes
Wait for OTT
Yes
We are a people perpetually enthralled by emotions. We like the idea of star-crossed lovers, we adore those stolen glances that speak volumes, we think that the sight of a silken dupatta drifting in the wind is absolutely poetic, and our hearts do a flip when the male lead swaggers onto the screen - all boyish charm, and dimpled cheeks. We shamelessly cheer when the female lead runs alongside a train, her hands outstretched towards the man she loves. Indeed, we revel in the desperate yearning that fills these moments of sheer celluloid magic.

But enough about DDLJ.

Ramaiya Vastavaiya is a film that tries hard to be DDLJ, but fails. It tries harder to be Nuvvostanante Nenoddantana (the Telugu blockbluster that Ramaiya Vastavaiya is a remake of), but comes up short there as well. And finally, the film comes nowhere close to Maine Pyar Kiya (the film that brought to prominence, the whole farmgirl-meets-city-boy sub-genre of romantic movies, and the plot of which was nipped and tucked here and there to give Nuvvostanante Nennoddantana). And we are not even going to mention Pyar Kiya Toh Darna Kya here.

Indeed, there were moments during the film when all we wished for was to have Kajol grace the screen with her infectious effervescence, and for Salman Khan to goof around like there was no tomorrow. Did we also say that we wished that Hogwarts was real? Yeah, enthralled by the impossible. That's us.

Going by the fact that director Prabhudeva's debut venture, Nuvvostanante Nenoddantana, was such a huge success, the plot then, needs no lengthy presentation. Raghuveer (Sonu Sood) is the doting brother of Sona (Shruti Hassan), and the siblings are left orphaned after their mum dies of heartbreak (quite literally).

At her samadhi, Raghuveer vows to be mother hen to his little sister, and fuss over her for the rest of their lives. Clearly, there's no such thing as too much molly-cuddling when it comes to big brother Raghuveer.

Sona's childhood friend is getting married, and the village belle is whisked away to the big bad city, away from her err... s"mothering" brother. Meanwhile, there's Ram (Girish Kumar), who lives in Australia, and likes to surf and to prance around in stupid ostrich costumes (in that order).

Ram is Sona's friend's cousin, and he comes down to attend his cousin's wedding, and before you know it, he's hitting on Sona so hard we are surprised the delicate darling doesn't faint from all that glaring attention.

The two lovebirds have to overcome seemingly insurmountable odds, all of which are Raghuveer. Okay, we're being unfair, there are a handful of others who seem to be utterly unashamed of the fact that they're grown men who are trying to sabotage a prospective coupling.

Since when did the jealous bridesmaid a.k.a. scheming vamp a la "insert name of any Ekta Kapoor serial here" lose this honor to a bunch of paunch-y and raucous men who topped the poll on "How NOT to act"?

The film's music might have earned public approval, but we only found "Jeene Laga Hoon" worth remembering. The editing seems to be a little slipshod at some places, and the song sequences (apart from "Jeene Laga Hoon") could have been better shot, and choreographed. Prabhudeva has lately taken to making a guest appearance in his movies, and he makes one here as well. As always, it's heartening to watch him dance.

The dialogues are - how to say this politely - cringe-worthy at places, and umm... exasperated-groan-inducing at others. Paresh Ganatra offers some comic relief as Bijli, the oddman at Ram's cousin's wedding.

Debutante Girish Kumar tries too hard. That's it. That's all the space we're going to accord to a newbie actor who thinks that in order to become a member of the elite Khandom of Bollywood, one needs to be a good dancer, while displaying fewer expressions than a slab of rotten cheese. Even the cheese has more colour than this wild-haired phoren chhokra.

Shruti Hassan looks achingly beautiful, and might just bring the humble salwar kameez back in vogue. We hope she doesn't bring the simpering, and the flailing-of-arms-helplessly back though. There's a thing called woman empowerment that we're rooting for these days.

And this brings us to Sonu Sood. Though the man looks like he's stoned for most of the movie (what's with the uber blood-shot eyes dude, did you smoke up the whole of Amsterdam?), he is still the most watchable of the lot. You get to see that special kind of dignified, under-stated intensity that reminds you of a certain Amitabh Bachchan. Sood is sincere, earnest and a tour de force in every scene that he appears in.

This is one endearing gaonwala - earthy, humble and fiercely protective as well as proud of his turf and his sister. We are seriously tempted to declare his act in Ramaiya Vastavaiya to be a notch (or a few) better than that of Srihari in the same role in Nuvvostanante Nenoddantana.

Oh, there's also Vinod Khanna there somewhere. In a role so wasted that we hardly have anything to say about it.

In the end, the only thing we can say is that Ramaiya Vastavaiya is the Hindi remake of Nuvvostanante Nenoddantana. 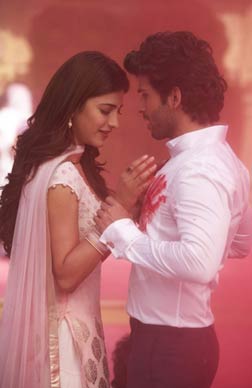 See Ramaiya Vastavaiya full details
RAMAIYA VASTAVAIYA USER REVIEWS
1 - 1 OF 1 COMMENTS
POSITIVE  |  NEGATIVE |  NEWEST  |  OLDEST  |  MOST HELPFUL  |  LEAST HELPFUL
shan muzammil khan on 8th Feb 2014, 12:23pm | Permalink
I just love to see ur movie so many times as on one else can pass any type of comment on me towards the love of mine for u bro.
I would like so much to see u face to face.
I've been waiting for ur next glimpse.
In this movie u have won my heart bro.
I have just gone crazy now.
From now u have become my leader that motivates me everytime.
I lOVE UUUUUUUUUUUUUUUUUUUUUUUUUUUUUUU.
U are really the guy that can do anything and u'll definitly be the biggest star in Bollywood.
Amen!
LEAVE A COMMENT
fullhyd.com has 700,000+ monthly visits. Tell Hyderabad what you feel about Ramaiya Vastavaiya!
MORE MOVIES
Latest Reviews
Elvis
Sammathame
Jugjugg Jeeyo
Godse
Nikamma
more
Virata Parvam
Ante Sundaraniki
Janhit Mein Jaari
Jurassic World: Dominion
Jurassic World: Dominion (Te...
Jurassic World: Dominion (Hi...
Vikram
MAJOR
MAJOR (Hindi)
F3: Fun and Frustration
Contemporary Reviews
White House Down
Turbo (3D)
Red 2
Ship Of Theseus
Made In Vizag
more
Nasha
Bajatey Raho
D-Day
Kevvu Keka
Om (3D)
Pacific Rim
Despicable Me 2
Sixteen
Pacific Rim (Telugu)
Random Reviews
Bhadradri
S W A T (Hindi)
Chori Chori
Juniors
Leta Manasulu
more
Veedhi - The Street
Pirates Of The Caribbean - D...
Boss
18.20 Love Story
Manam
Vikramasimha - The Legend
Maggie
Kahaani 2
Baaghi 2
Charlie's Angels (Hindi)
SEARCH MOVIES
Dissatisfied with the results? Report a problem or error, or add a listing.
ADVERTISEMENT
SHOUTBOX!
{{todo.name}}
{{todo.date}}
[
ip{{todo.ip}}
]
{{ todo.summary }}... expand »
{{ todo.text }} « collapse
First  |  Prev  |   1   2  3  {{current_page-1}}  {{current_page}}  {{current_page+1}}  {{last_page-2}}  {{last_page-1}}  {{last_page}}   |  Next  |  Last
{{todos[0].name}}

ADVERTISEMENT
This page was tagged for
ramaiya vastavaiya movie 720pl
ramaiya vastavaiya hindi movie
ramaiya vastavaiya movie hindi full
Review Ramaiya Vastavaiya
Ramaiya Vastavaiya hindi movie
Follow @fullhyderabad
Follow fullhyd.com on
About Hyderabad
The Hyderabad Community
Improve fullhyd.com
More
Our Other Local Guides
Our other sites
© Copyright 1999-2009 LRR Technologies (Hyderabad), Pvt Ltd. All rights reserved. fullhyd, fullhyderabad, Welcome To The Neighbourhood are trademarks of LRR Technologies (Hyderabad) Pvt Ltd. The textual, graphic, audio and audiovisual material in this site is protected by copyright law. You may not copy, distribute, or use this material except as necessary for your personal, non-commercial use. Any trademarks are the properties of their respective owners. More on Hyderabad, India. Jobs in Hyderabad.