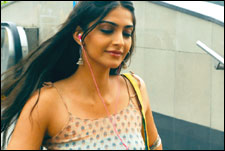 Priyanka Pulla / fullhyd.com
EDITOR RATING
4.5
Performances
Script
Music/Soundtrack
Visuals
8.0
3.0
7.0
7.0
Suggestions
Can watch again
No
Good for kids
No
Good for dates
No
Wait for OTT
Yes
It is easy to tell where exactly Delhi 6 goes wrong. Rakeysh Mehra was out to make a fond movie about the city of his birth, but could not resist corseting it in a bit of conventional moralisation. He paints over a frisky, anecdotal collage of Delhi with the bleak gray of communal strife. Fancy-free descriptions of the grand old city of Delhi simply do not sit well with hamming epiphanies about love and universal brotherhood.

Not that the movie does not have its share of fine moments. Roshan (Abhishek Bachchan), who brings his grandmother (Waheeda Rehman) back to Delhi from New York, provides the amused, third person perspective of the bustling Indian microcosm. An ensemble cast of some top-notch character actors plays the many species of Chandni Chowk's little self-contained ecosystem.

So the Jalebi seller is a Muslim who worships Hanuman, and Roshan's daadi is a Muslim wedded into a Hindu family and religiously irrigates her Tulsi plant every day. And Roshan adapts himself to an eclectic routine of skullcapped visits to mosque, Ram Leela appreciation, and playing billiards over beer with an avuncular Rishi Kapoor. He is as delighted with the whole milieu as a white-tourist around a well-trained temple elephant.

While pointedly emphasising the communal symbiosis, Mehra finds time to paint each character in engaging detail. Sonam Kapoor, who plays the slender Bittu, a childlike, self-absorbed dreamer, is just one of the characters unfortunately. Doesn't take much to play the Nukkad belle to perfection, and she pulls off the non-challenge fairly well. Roshan is drawn to her as he goads her to rebel against the plans of her father (Om Puri) to marry her off against his wishes.

Basically, the weather is sunny with ample tailwinds, and we expect a smooth ride ahead, when turbulence hits.

Enter the Monkey Man - a good touch this - including an actual incident as a story engine. Delhi in 2001 saw attacks by a so-called Monkey Man, causing a few deaths due to sheer paranoia as people plunged off heights after imagined sightings. The movie spoofs rabid news channels as their bloodhound reporters get on the trail of the mischief-making chimp. Some hilarious urban legend causes a few titters in the audience. There are Chinese whispers about a lit-up computer motherboard on the chimp's chest, while Chandni Chowk is flooded with merchandise featuring the hairy terror.

Mehra is on a roll by now, almost making up the story as he goes along, throwing in experimental ingredients like a master chef who can't go wrong even if he tosses carbolic soap into the soup. Which he does. With the effect that he manages to pretty much screw the pooch.

The Chandni Chowkites, through a bit of stretched logic, conclude that the Monkey Man is really a Muslim fundamentalist. Gullible Hindus and Muslims swallow the bait and jump into a free-for-all much like Goscinny and Uderzo's gauls.

Very satirical and all, but it is this dramatic mood-swing in the movie that destroys the finesse. One minute the characters are charming and expansive, and the next, they are suffocatingly, foolishly paranoid. From a poetic portrayal that bubbles with optimism, Delhi 6 dissolves into tears and lament.

In response, Roshan acquires saint-vision and starts appreciating the inner beauty of the petty squabblers. He dons his martyr's cloak and halo, and indulges in an act of selfless folly to save the Chowkites from themselves. His love story with Bittu catches up meanwhile to dovetail into the kitschy and forced resolution. Tsk Tsk. What a downfall!

For the maker of Rang De Basanti, it might have been hard to resist throwing in the odd social issue. After all he proved how well he could handle it once before. If only he had desisted. Delhi 6 could easily have been a charmer of the movie. Instead, you end up getting antsy waiting for Masakali to come along. Amazing song, that. Some delectable characterisation. And a movie that is a whole lot lesser than the sum of its parts.
Share. Save. Connect.
Tweet
DELHI 6 SNAPSHOT


Pros: Music and performances of the entire supporting cast.
Cons: Everything else

RATING
4
Siva on 2nd Mar 2009, 1:16am | Permalink
Movie was boring.. I have read some of the comments from other sites too, people who liked this are saying the those who didnt like probably are fans of Singh is King style of movies. I dont think so. This one dragged genuinely.

Nice review, i think reasonably rated, though " Gullible Hindus and Muslims swallow the bait and jump into a free-for-all much like Goscinny and Uderzo's gauls." wow, wonder how many understood that :-)


Pros: music
Cons: rest of it


RATING
4
paneer butter masala on 1st Mar 2009, 3:39pm | Permalink
I loved the first half. And really, a lot because of Rahman's music. The second half started out as a joke and ended as a mess, but overall, the film isn't as pathetic as everyone's saying it is. I feel pretty sad for the makers since it looked like a pretty honest effort to me.
Performances were top class, and Waheeda Rahman is so amazing. Contrary to what people are saying, i thought Abhishek Bachchan also made this film easy to sit through, in fact, he's ultra-sweet.

RATING
7
tom rao on 21st Feb 2009, 5:37pm | Permalink
the "no starcast despite an old AB" in my comment below should read "no starcast except for an old AB".......
tom rao on 21st Feb 2009, 5:32pm | Permalink
most of the reason rdb worked was a certain aamir khan. let's ask ourselves- without him, would we have watched it? mehra was the same guy who made Aks, which had no starcast despite an old AB,and could not work despite the fact that it was based on faceoff. and delhi 6 would have quite likely worked with aamir khan instead of abhishek.
the point is, mehra's movies are not about mehra.he makes the cut as director, maybe, if you set your standards at a certain level, but not as writer.
sonam kapoor is jinxed, i think. alas. and ms pulla, nice review as usual. nice to see you back.

ADVERTISEMENT
This page was tagged for
Delhi 6 hindi movie
Delhi 6 reviews
release date
Abhishek Bachchan, Sonam Kapoor
theatres list
Follow @fullhyderabad
Follow fullhyd.com on
About Hyderabad
The Hyderabad Community
Improve fullhyd.com
More
Our Other Local Guides
Our other sites
© Copyright 1999-2009 LRR Technologies (Hyderabad), Pvt Ltd. All rights reserved. fullhyd, fullhyderabad, Welcome To The Neighbourhood are trademarks of LRR Technologies (Hyderabad) Pvt Ltd. The textual, graphic, audio and audiovisual material in this site is protected by copyright law. You may not copy, distribute, or use this material except as necessary for your personal, non-commercial use. Any trademarks are the properties of their respective owners. More on Hyderabad, India. Jobs in Hyderabad.