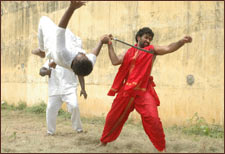 Deepa Garimella / fullhyd.com
EDITOR RATING
2.0
Performances
Script
Music/Soundtrack
Visuals
3.0
1.0
2.0
4.5
Suggestions
Can watch again
No
Good for kids
No
Good for dates
No
Wait to rent it
No
When the pious, sacred-thread-toting convict, Venkatadri (Nandamuri Tarakaratna), is read out his death sentence, he keeps a straight face. This is because he doesn't fear death. More importantly, he will not outdo the acting skills of his grandfather's photograph.

As per his last wish, he sings at a concert. Here, the CM's daughter Baby (Mandeep Thakkar), is enraptured. She gets his death sentence pardoned, and starts taking lessons from him. This results in Venky being regularly scooped off in a police van to the CM's house, where he guides Baby's limbs in various activities - like playing the violin etc., we mean.

But Venky tells Baby that she's better off without him because he has a Seema background. Seema is where people have not heard of Gandhi or Darwin, and so, in the flashback, the righteous clan of village headman Narasimha Naidu (Ranganadh) is constantly thwarting the cleavers and cudgels of the immoral one of Seshadri Naidu.

Narsimha Naidu sends his grandson Venkatadri, then a toddler, to a gurukul, so he may grow up to be peace-loving. In fact, he grows up with many superhuman qualities - apart from the character of Lord Rama and the physical prowess of Shaktimaan, he also has the fashion sense of King Kong and the negotiation skills of Scooby Doo.

Venkatadri's sister loves someone from Seshadri's family, and to get her married, he agrees to Seshadri's diabolical demands, as a result of which, Narsimha's family is left homeless, and Venkatadri is scrubbing cattle in Seshadri's backyard, which was originally their (Venkatadri's family's) backyard.

Now, Venkatadri does not mind scrubbing cattle, as long as they don't ask him to do complex, demeaning tasks like simultaeously speaking and emoting. But one day, they mow down his sister. As a result, he butchers 7 people, but by then, Seshadri's guys have polished off his entire family.

Back to the present - Venkatadri is now being attacked by the villains. This makes for interesting viewing. For instance, he digs a sword through the head of a goon, and the sword emerges at the base of his neck. We were just thinking this would put P C Sorcar to shame, but we realized that the sword emerged from the goon's neck, and not Venkatadri's. At the end, Venkatadri emerges triumphant, and is released from jail.

It's stunning how the makers thought audiences would be lining up to catch a faction tale featuring people whose names don't come to mind in anyone's top 50 list of favourite actors. Heck, their names don't come to mind in any list. The absence of a script and starcast isn't made up by clever dialogues or catchy music either. The violence goes overboard, too, and the end product is something of a royal headache.

This film puts Tarakaratna in the shoes of a typical Tollywood hero. Unfortunately, the shoes are more than 2 decades old, verrry smelly, and unsuitable for socially accepted dance moves. And whenever he is not being indifferent to the ongoing scene, he sometimes substitutes lung power for acting, a strategy which works only if you're famous enough.

The women are entirely forgettable fixtures. Ranganadh's effortless performance makes him stand out over the entire film.

We assume that music directors would have given an arm and a leg to compose for a well-respected banner. In fact, the music makes you tear your arm and a leg - just so you can throw something at the screen.

So who wants to watch a gory, moth-eaten, dim-witted Seema flick when there are other ways to look at NTR's photo? Not us, and certainly not you.
Share. Save. Connect.
Tweet
VENKATADRI SNAPSHOT

ADVERTISEMENT
This page was tagged for
Tarakaratna venkatadri telugu full movie
Venkatadri telugu movie
Venkatadri reviews
release date
Nandamuri Tarakaratna, Mandeep Thakkar
Follow @fullhyderabad
Follow fullhyd.com on
About Hyderabad
The Hyderabad Community
Improve fullhyd.com
More
Our Other Local Guides
Our other sites
© Copyright 1999-2009 LRR Technologies (Hyderabad), Pvt Ltd. All rights reserved. fullhyd, fullhyderabad, Welcome To The Neighbourhood are trademarks of LRR Technologies (Hyderabad) Pvt Ltd. The textual, graphic, audio and audiovisual material in this site is protected by copyright law. You may not copy, distribute, or use this material except as necessary for your personal, non-commercial use. Any trademarks are the properties of their respective owners. More on Hyderabad, India. Jobs in Hyderabad.