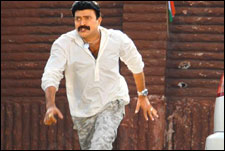 Deepa Garimella / fullhyd.com
EDITOR RATING
4.0
Performances
Script
Music/Soundtrack
Visuals
6.5
5.0
4.0
5.0
Suggestions
Can watch again
No
Good for kids
No
Good for dates
No
Wait for OTT
Yes
DCP Satya (Rajasekhar) is a cop who flares up instantly at the thought of people who are a threat to the rest of the world. This results in him spontaneously combusting every 30 seconds. His team, consisting of Siva Reddy, Sivaji, Sai Kiran and Neetu Chandra, is once sent to Vizag to bring back Dr. Iqbal Ansari (Atul Kulkarni), the prime accused in a blast case. On the way back, they run into Ranadev (Milind Soman), a highly dangerous villian.

Satya and Ranadev share a gory background which involves Satya saving the CM's life during a terrorist attack by Ranadev, Ranadev bribing his way out of jail, and then mowing down Satya's wife and her family. Ranadev now tells Satya that he wants Ansari to be handed over to him. An ugly fight ensues, but Satya realizes that he is in deep trouble as some higher officials are plotting against him.

Satya would have retorted immediately, but Neetu Chandra steps in saying that for all the trouble she took for this film, she deserves to do more than just wear a uniform. So she is given a song with Satya, in which she gets to show off her martial arts skills in some microscopic skirts.

Slowly and painfully, even losing one man to the ruthless Ranadev, Satya's team returns to Hyderabad, where he decides to expose a lot of truths. At this point, his higher officials announce that they have had enough of the music director's originality (which led to the ingenious Telugu renditions of one R D Burman hit and one Western hit). So the next song is directly dubbed from Hindi. This is done so well that everyone in the theatre thinks â€˜Aisa Jadoo' was originally a hit song in Telugu.

Satya's fervent desire to cleanse the system makes him drag the Home Minister on the Minister's conference table, and down his staircase, in front of 100 cameramen. He is applauded by one and all for this, and many people later line up in front of Satya's home to ask him to clean up their furniture too. Fortunately, he decides to end the movie instead.

This Khakee remake is decent in parts, but the overall feel is that of a regular cop movie with all the usual ingredients - action, angry dialogues, clichÃ©, clichÃ© and clichÃ©. To its credit, Satyameva Jayate's script is pretty taut. However, the film is aimed at the masses. Rajasekhar's dubbing takes away most of any intended attraction in the dialogues.

Atul Kulkarni's is the best portion of the film, Rajasekhar puts in a good performance, and next in line is Ahuti Prasad as a senior police officer. Sayaji Shinde is grating on the nerves, and Neetu Chandra sure will be sorry she did this flick. As for Milind Soman, we are sorry.

On the whole, this one can be missed, with no regrets whatsoever, unless you want to know how Khakee can be worn by the wrong people.
Share. Save. Connect.
Tweet
SATYAMEVA JAYATHE SNAPSHOT

ADVERTISEMENT
This page was tagged for
Satyameva Jayathe telugu movie
Satyameva Jayathe reviews
release date
Dr. Rajasekhar, Neetu Chandra
theatres list
Follow @fullhyderabad
Follow fullhyd.com on
About Hyderabad
The Hyderabad Community
Improve fullhyd.com
More
Our Other Local Guides
Our other sites
© Copyright 1999-2009 LRR Technologies (Hyderabad), Pvt Ltd. All rights reserved. fullhyd, fullhyderabad, Welcome To The Neighbourhood are trademarks of LRR Technologies (Hyderabad) Pvt Ltd. The textual, graphic, audio and audiovisual material in this site is protected by copyright law. You may not copy, distribute, or use this material except as necessary for your personal, non-commercial use. Any trademarks are the properties of their respective owners. More on Hyderabad, India. Jobs in Hyderabad.