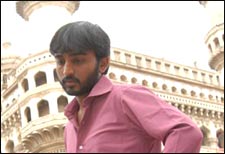 EDITOR RATING
2.0
Performances
Script
Music/Soundtrack
Visuals
4.0
1.0
6.0
2.0
Suggestions
Can watch again
No
Good for kids
No
Good for dates
No
Wait for OTT
No
Hi. I'm Gutti Gurumurthy. My friends call me Gutti, the villians call me a cockroach, and audiences call me a nightmare. In this movie, I play the role of an innocent man who is caught between 2 rival gangs. For every time that you wish one of them had finished me off, if you had a rupee, that'd be a lot of money wasted, since this movie will quite likely finish you off anyway.

Indeed, I look so dumb, you'd wonder if calling me human isn't being racist. So when my friend at Hyderabad where I've come for an interview, tells me to clear out of his house as soon as I've got a job, since some goons he owes money to might land up any moment, I continue to hang on anyway, and when the goons do land up, I actually ridicule them. And all hell breaks loose.

Yes, many slow and boring movies suddenly turn quite gripping when a hero who looked weak and dumb so far suddenly shows that he is actually a fierce warlord with a dreaded past who is now trying to lead a low-profile existence. Unfortunately this is not one of those movies - I am as weak and dumb as ever, and the goons just haul off my sorry ass to their gangster boss Yadagiri (Kota).

Now Yadagiri has been having a running fued for the past 20 years with his neighbour and rival gangster Pavada Rami Reddy (Jayaprakash), and has a major challenge ahead of him - no, not trying to have a meaningful conversation with me, but killing Pavada's son in 16 days. Pavada has just killed Yadagiri's son, and Yadagiri's sworn he'll get revenge in 16 days.

I give Yadagiri advice on how he can use clever thinking to kill Pavada's son without innumerable innocent people dying in the process - especially in the audiences. Yadagiri is stunned by my thinking, and to express his gratitude, he tells me to execute my plan myself, failing which he'll kill me on the 17th day. Giving advice to an overreacting gangster is like submitting a personal experience to a pornographic magazine - the more a reader likes it, the more he wants to see you actually do it.

I return home disturbed, and find something in it that wasn't there when I locked and left - Angel (Charmme). A thief with more body mass index than acting skills, she completes my miseries perfectly - I now have a female who overacts and a gangster who overreacts, to deal with. You could call Angel an irrelevant and completely meaningless part of this movie, but that would mean you are indirectly saying that the rest of this movie isn't irrelevant and completely meaningless, which is unfair to it.

Pavada discovers in no time that I am going to try to kill his son - through his amazing spy network, through his unparalleled ability to discover a person's intentions in just one look, and mostly since I land up at his home, knock on his door and inform him that I've been appointed to do the job - and his men bury me alive. What happens next is quite surprising - i. e., there are some people still in the theatre.

Well, I think you should watch this movie - at least for Charmme's imitations of other actors. She's so bad, she looks like she's imitating herself. As for me, I probably have a future as an actor, since when I cry, I make you cry, too. I hope that's lost in translation. Our director thought shooting a movie entirely with a colour tint makes for a slick film. Well, this must be the first blue film without any smut.

ADVERTISEMENT
This page was tagged for
16 Days telugu movie
16 Days reviews
release date
Aravind, Charmme
theatres list
Follow @fullhyderabad
Follow fullhyd.com on
About Hyderabad
The Hyderabad Community
Improve fullhyd.com
More
Our Other Local Guides
Our other sites
© Copyright 1999-2009 LRR Technologies (Hyderabad), Pvt Ltd. All rights reserved. fullhyd, fullhyderabad, Welcome To The Neighbourhood are trademarks of LRR Technologies (Hyderabad) Pvt Ltd. The textual, graphic, audio and audiovisual material in this site is protected by copyright law. You may not copy, distribute, or use this material except as necessary for your personal, non-commercial use. Any trademarks are the properties of their respective owners. More on Hyderabad, India. Jobs in Hyderabad.